The most notable thing about seedling 020A is that I almost didn't get to see the bloom; it's rare, but the Schlumbergeras do sometimes die of natural(-ish) causes, and I think 020A got overwatered and cold simultaneously, last year, causing a substantial branch to rot. Another branch came close to rotting but appears to have re-rooted itself over the summer.

It wouldn't have been much of a loss if it had died; the color is a little unusual (lighter than the normal orange), but the plant only produced one flower, and as I mentioned in the post for 077B Bad Reputation, I'm having a tough time trusting that any of the bloom colors are the real bloom color. Maybe it's unusual, and maybe it's not. Anyway. This is the only photo I got -- 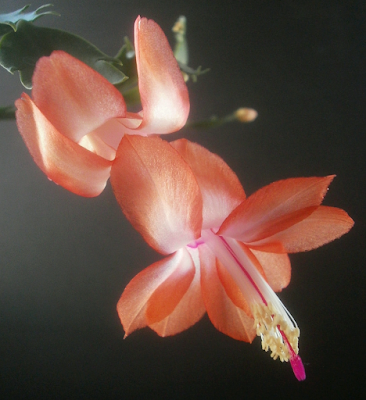 -- so we'd best get to the name options.

We have: Confidential Help, Feet Of Clay, Outrun The Bear, and Special Hardship, which I think are all pretty self-explanatory except maybe Outrun The Bear, which is a reference to a joke.1

So I'll drop Confidential Help first, on the grounds that it makes less sense now than it did whenever I thought of it.2

And Outrun The Bear isn't nearly as funny now that I've ruined the joke for myself.

Special Hardship sort of works, referring to the rotted branches, but Feet Of Clay is an even better reference to a seedling that may have weak roots.3 Hell, the bloom is even (approximately) clay-colored. So: Feet Of Clay.


1 Two campers are out in the woods doing campery things, and all of a sudden they see a bear in the distance. The bear sees them too, and starts coming toward them, and the first camper sits down, takes off his heavy hiking boots and puts on a pair of tennis shoes. "What are you doing changing shoes," says the second camper, "you're not going to outrun the bear." "I don't have to outrun the bear," answers the first camper. "I just have to outrun you."
And then the second camper pulls out a knife and slices the first camper in the calf, I guess, because that's kind of a dickish answer and clearly they must not get along that well. Also it's only logical, by the first camper's reasoning. Naturally the first camper strikes back, and so on back and forth until by the time the bear arrives they're both hobbled and bleeding, and the bear kills them both and then eats all the food they brought, which is just as well because they were clearly pretty shitty people.
Actually I added everything after "I just have to outrun you." The joke's always bothered me.
Though I think it bothers me even more after my addition: it feels like a metaphor for something.
2 I suppose I just meant that the seedling needed help to get back on track again, and the help would have to be confidential so as not to embarrass it in front of the other seedlings. Sometimes the anthropomorphization gets away from me a bit.
3 Not to mention the "in psychotherapy" part of the Wikipedia article about "feet of clay," as psychotherapy ties neatly into the "confidential help" thing. Confidential help that the seedling needs because of its special hardship. This whole post is just a tiny ball of densely-knotted interconnections, innit?
Posted by mr_subjunctive at 3:00 AM

Walking Dead made use of the bear scenario. In one episode two men are trying to outrun a hoard of zombies. One guy shoots the other guy in the leg so he can get away while the zombies attack and kill/eat the guy he shot.. An honorlrss cur, indeed.