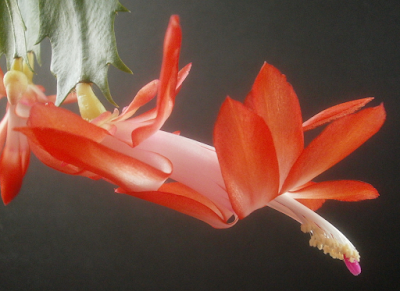 The name nominees are: Beaker, Lucille Ball, and Summer In Winter.1 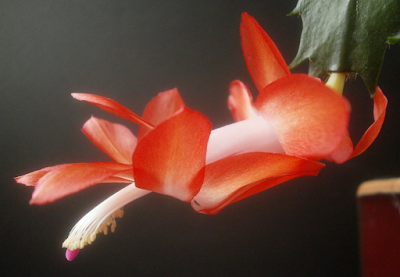 Beaker, obviously, is the Muppet, whose orange hair and pink skin is an approximate match for the orange/pink color combination of the seedling. It's a better color match than Lucille Ball is, though being a real person counts in Lucille Ball's favor. It's also possible that Beaker could run afoul of trademarks or something, as Disney owns the Muppets and is known to be on something of a hair trigger when it comes to suing people.2

Summer In Winter is just a reference to the color (orange, warm, sunny, summerish, plus white/snow/winter) and bloom season (late fall / early winter). 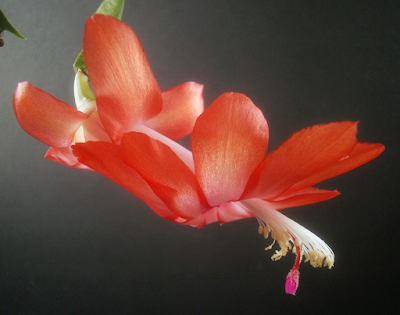 This choice isn't much of a choice, unfortunately. Summer In Winter sounded nice when I thought of it, but I don't like it at all now, for reasons which are difficult to explain but more or less amount to, I feel like it's trying too hard to be pleasant.3 And I wound up convincing myself that Beaker is a bad idea, and Mr. Beaker doesn't change it enough. Which leaves, anticlimactically, Lucille Ball. 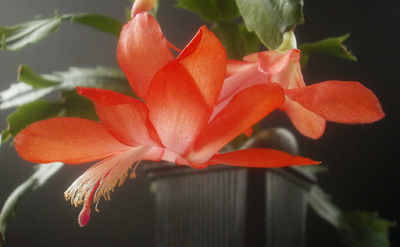 Not that I don't like Lucy. I love Lucy (it says so right in the title of her show!). Like with Dusty Springfield, I find Ball admirable and deserving of respect, but just don't feel that much of an emotional connection with her. These things will happen sometimes, I guess.


1 A fourth nominee was removed from consideration when pre-writing internet searches revealed that, despite seeming perfectly innocent, it had unfortunate fascist / Nazi-Germany connections. In the past, I might have been willing to go along with it, in a sort of well I'll just fucking make it mean what I want it to mean and besides that's a pretty loose and non-obvious connection so it's not like people will know way, but times are strange. And there are so many possible seedling names that it's not that big of a deal to lose one.
Unfortunately, I found out about this too late in the blogging/naming process to come up with a fourth option.
2 I did have, probably still have, an actual laboratory beaker that my lab partner and I had used in high school chemistry. I don't remember what was written on it, but I remember we wrote something on it in orange china marker and we found this so amusing that I asked the teacher if I could keep the beaker and she said yes. Since the flower's pink is a pretty weak pink, there could be a case made for naming the seedling "Beaker" in honor of the chemistry lab beaker (actually, now that I think about it, I'm pretty sure what we wrote on it was "Mr. Beaker," and it was the beaker's own name, not a Muppets reference), rather than the Muppet. Would that hold up in court?
It'd help if I could locate Mr. Beaker, I suppose. And I'm not positive that Mr. Beaker didn't get the china marker washed off of him at some point.
3 (Also, I would much rather see more winter in my summers than summer in my winters. Winters are too summery already.)
Posted by mr_subjunctive at 3:00 AM