Not especially new, again. I've made a number of mistakes in the course of breeding my Schlumbergeras, and growing out too many seedlings was one of the bigger ones. At the time, I was a couple years away from having seeds from any other crosses, and I didn't know how variable the offspring would be, so it made sense to pot up everything I could get, but now that I have other combinations to try, and so much space devoted to the first batch of seedlings, I wish I'd restrained myself a little more.

092B is also a good example of the other main mistake I made: putting multiple seedlings into the same pot. The plants don't mind, but it complicates record-keeping, and in some cases I don't know whether I have a pair of differently-colored seedlings or a single highly variable one. 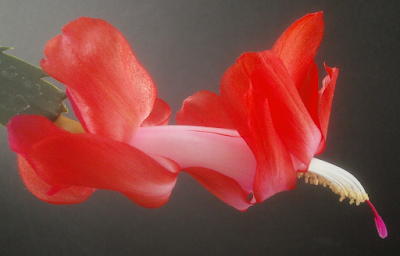 Three of the four name finalists are there because the first bloom (above) was mostly red: Naughty Santa (originally suggested by Nadya W-G) makes sense for a red / white seedling. Nine of Hearts implies a red seedling (I think it was originally a random word combination). Rooster is maybe a little more ambiguous, since rooster feathers can be a lot of different colors, but the comb is always (?) red.2

Which means that, then, when the same plant produced this much oranger flower three months later, 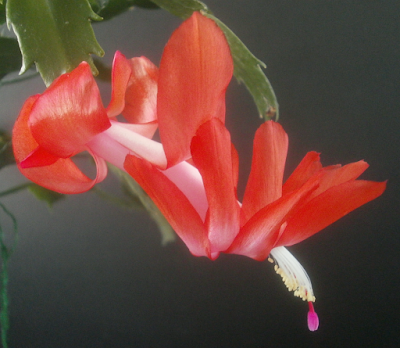 I don't remember when I first became aware of Dorothy Parker, but my guess is that it was probably in high school; I went through a spell where I read all the books of witty, famous, or otherwise notable quotes I could find, and copied them by hand into a notebook.3 And Parker is nothing if not quotable, so she wound up in there a lot. Some of them you probably already know: on being challenged to use "horticulture" in a sentence, Parker came back with "You can lead a horticulture, but you can't make her think." She drank a lot (was almost certainly an alcoholic), which led to "One more drink and I’ll be under the host." The one I liked the best that I hadn't heard before researching this post was:

If you have any young friends who aspire to become writers, the second greatest favor you can do them is to present them with copies of The Elements of Style. The first greatest, of course, is to shoot them now, while they’re happy.4

Parker was not a happy person. The impression I got from this piece at The New York Review of Books (which I strongly recommend reading) is that she could be delighted at how wonderful the world could be, and yet was so often disappointed by how mediocre, lazy, unjust, and pretentious it often actually was. The cynical, caustic exterior she presented wasn't because she hated the world and wanted to die; it was a defensive response to being disappointed so often, by so many, including herself. Few of us would (or could) make a career out of disappointment, but we've all felt it, which is maybe partly why we still remember what she had to say.5

When Parker died in 1967, her will left her entire estate to Dr. Martin Luther King, Jr.; on his assassination in 1968, it was transferred to the NAACP, and her ashes are now buried at the NAACP's Baltimore headquarters.


1 Lately, I'm even keeping track of the pollen parents. Those seeds won't be doing anything interesting for at least a couple years, but at least I won't have to try to guess where their colors came from when they do.
2 Embarrassing but true: until I looked this up, I was not aware that hens generally also have combs. They're often smaller, duller in color, or both, and they don't appear until chicks are at least a couple weeks old (often longer; it depends on the breed), but the combs are nevertheless there.
3 In the snow! Uphill!
4 (It's funny because it's true.)
5 No doubt an oversimplification. And I may be overidentifying with Parker a bit too. But that sure seems to be the foundation of the piece from The New York Review of Books.
Posted by mr_subjunctive at 3:00 AM