Dana's the first good Anthurium news I've had in quite a while. The color doesn't photograph all that clearly (the camera lightens it substantially), but in person, it's a fairly dark purple, only barely lighter than her grandparent (the NOID purple), and substantially darker than her parent (0200 Mario Speedwagon). 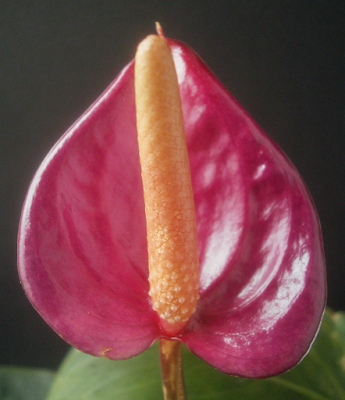 Not only that, but the spathes on Dana are larger than those of the NOID purple and Mario, as well, and she's remarkably productive. I don't keep track of every single bud produced by every single seedling, but I think she's just started building her sixth bud since the first one appeared five and a half months ago.

Even the new leaves are pretty. 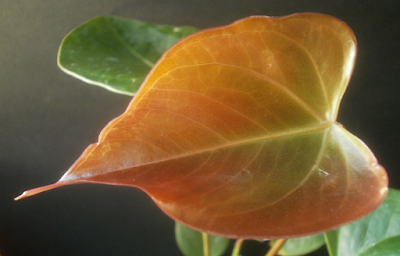 Which I guess just goes to show you that if you pull the lever enough times, sooner or later it'll come up BAR - BAR - BAR. Or whatever the winningest combination is for slot machines these days.1

Here's the plant as a whole, back when the first bud appeared. 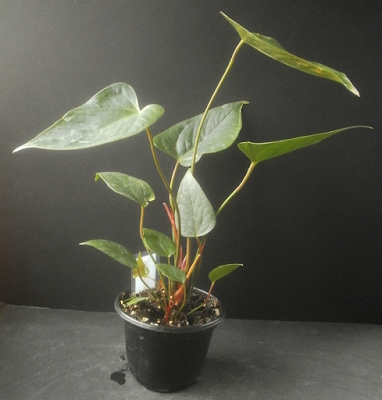 It doesn't look like that at the moment, because not long after that, I moved the plant up to a 6-inch (15 cm) pot. It's remained fairly compact (short internodes). Not much suckering, unfortunately, but there is a little bit. The overall habit is on the good side of average, at least.

There is also some thrips damage on the leaves from time to time; I don't see much of it on the spathes, but it's hard to know if that's because purple isn't attractive to thrips or it's just dark enough to hide the damage better. Possibly some of both. 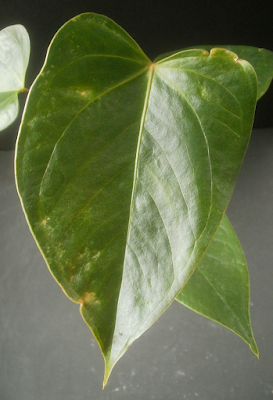 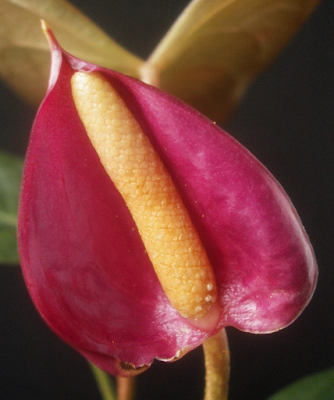 A couple other seedlings are doing things I haven't seen before -- I've mentioned 0648 Bianca Del Rio before, I think, which isn't doing anything you've never seen before, but Bianca's something the seedlings haven't done before, so that's interesting. And 1268 Li'l Miss Hot Mess produced a bloom, which isn't like any of the others either. Two other seedlings currently in bud, 1299 Sinthia D Meanor and 1325 Dixie D Cupp, have the potential to be something brand-new, if the bud colors are at all related to their final color, but it'll be a while yet before we find out. 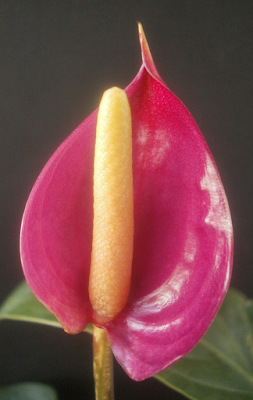 Anthurium, the genus, still needs to do an awful lot of really amazing shit if it wants to get back into my favor, but seedlings like Dana, Bianca, and Li'l Miss Hot Mess are a good start.


1 I've never played one in a casino, or even particularly wanted to. This is partly because one of my grandfathers had a hobby buying and refinishing old slot machines, and one day when we were visiting him, he gave my brother and I each a roll of quarters and had us play one of them until the money ran out. Which took very little time at all. If I had been thinking at all, I would have put the roll of quarters in my pocket and merely pretended to play with the slot machine. I don't remember how long ago this was, but I do remember feeling like $10 was a substantial amount of money. I mean, it wouldn't have been in the spirit of the thing, and I guess the actual experience effectively immunized me against gambling for the rest of my life, so it's probably saved me $10 in the long run anyway.
Posted by mr_subjunctive at 3:00 AM

What an exciting seedling! Have you tried backlighting to spot possible thrips damage on the spathes?

I hadn't tried that, but it's a good idea. Dana has a new bloom open now, so I'll try that.