The first inflorescence Nina produced was disappointing; the spathe didn't open fully, and the spathe color was in the same general red-pink area as so many other seedlings. But the second time, it was actually kind of nice: 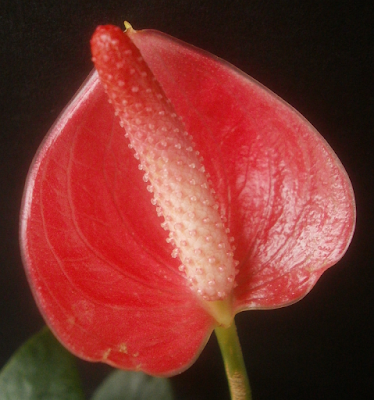 I mean, yes, the color hasn't changed and is kind of ordinary. But it's well-executed. If this is more typical of what the seedling's going to do in the future, then it might deserve the name Nina Flowers.1 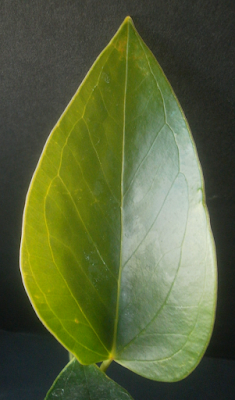 The leaves are mostly free of thrips damage, and the plant as a whole is fairly full, with a moderate amount of suckering. 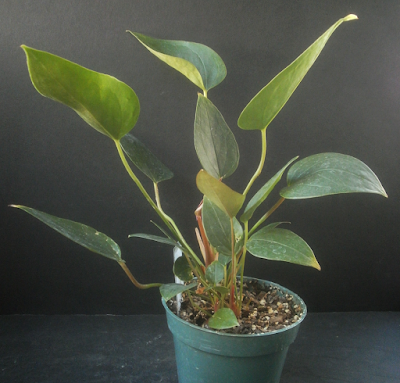 So, Nina's probably a keeper. My only regret is that the bloom isn't anywhere near as dramatic and stunning as the queen. Certainly there's a place in my world for solidly executed blooms that aren't particularly flashy, but it seems odd to name one of those "Nina Flowers."

In fairness, though, I'm not sure there are any Anthurium seedlings which are complicated and dramatic enough to deserve the name. "Nina Flowers" might be more appropriate for a Schlumbergera: they're at least more angular and complexly shaded than Anthuriums.


1 (A prominent Colorado-based drag queen with heavily stylized but impressive and precise makeup skills; also the namesake of my now-deceased anole.)
Posted by mr_subjunctive at 3:00 AM

I miss the pictures of your sweet little Nina. You kept her alive for ages, so I know she had a happy life.