So now I'm faced with a sort of problem. It's a completely optional problem, but it's still a problem.

The thing is that there's a completely unreasonable number of unblogged Anthurium seedlings,1 and most of them are not interesting on their own, at all. I could possibly make them interesting by talking about some other, barely related thing and ignoring the seedlings entirely, but that's kind of exhausting to do, particularly if I have to do it dozens of times.

So the plan is to write about the five or six most interesting ones,2 and see how I feel about the others once I'm finished. This will probably take a while, because having a new computer means I can have new games, and playing video games is a lot more fun than blogging about Anthuriums, even interesting Anthuriums.3 But we'll see how things shake out.

In the meantime, right at the moment, we have Anthurium seedling 1715, which is simultaneously one of the weirder, prettier, and more information-rich seedlings in a very long time. 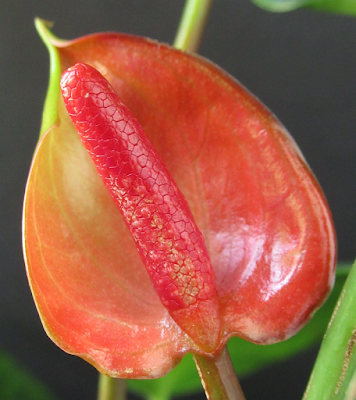 "Pretty" may or may not be obvious from the photo, but Tyler is consistently right on the line between red and orange, which I don't think I've ever seen before. Previously, they've always fallen pretty solidly on one side or another; the in-between color is really striking in person. There's also some green on the back of the spathes, like we've seen with 0330 Faye Quinette (who I suspect of being the pollen parent), which is unusual enough to qualify for "weird." 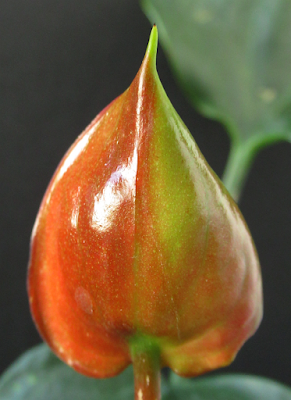 "Information-rich" comes from the foliage. You may remember that there's been a long-standing puzzle about seedling 0115 ("Erlene Adopter") and her clones (0580 Marsha Marsha Marsha, 0581 Adam All, 0586 Vera Special). All four of them, and none of the other 1500+ seedlings, will periodically and for no obvious reason go yellow at the veins, usually along the minor veins rather than the midrib or other larger veins. Sometimes it's only a couple spots, sometimes it's the whole leaf. It looks like this when it happens: 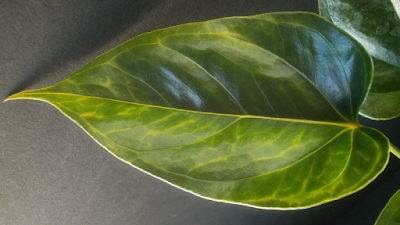 If I only had one Anthurium and it was doing this, I would assume a nutrient deficiency of some kind, but since I have lots, which are all in the same soil, all getting the same fertilizer at the same strength, etc., and only the ones that are clones of this particular seedling do it, I was thinking maybe it's genetic, or a virus or other disease which the original plant had, so all its clones did too.4

The virus theory's looking less likely now. I have thrips around, and thrips can transmit viruses, so if it were a virus, I should have seen this happen to other seedlings. But it's still only ever been the Erlenes.

And so now we have Tyler, whose seed parent was 0580 Marsha Marsha Marsha, and look at his leaves. Mostly they're fine: 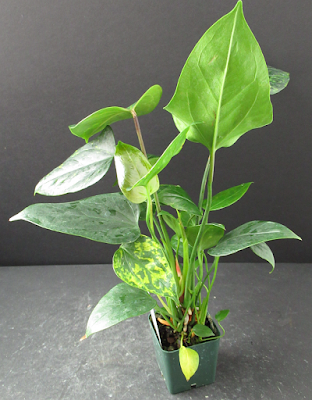 And they don't get gradually worse over time, as far as I can tell. The yellowing happens, 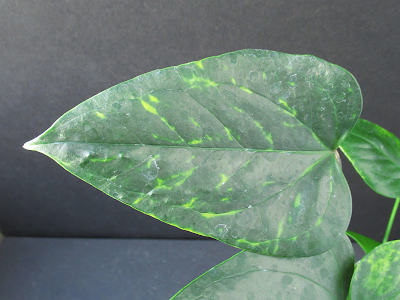 and then it stays. Doesn't reverse itself, doesn't get worse. The below photo is the same leaf, about a month after the above photo:5 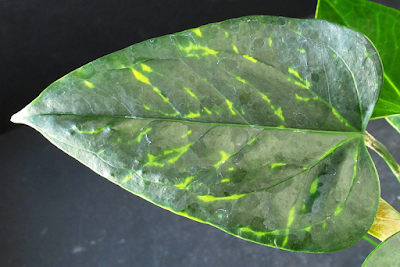 I mean, that might look a little worse because of differences in how the photos were taken -- the latter was more strongly backlit than the former -- but if you look, the spots haven't gotten bigger, and except for a couple along the leaf margin at the top left, which possibly just didn't show in the first photo because of reflection off the leaf surface, there aren't any new spots, either.

Occasionally the colors are much more dramatic. 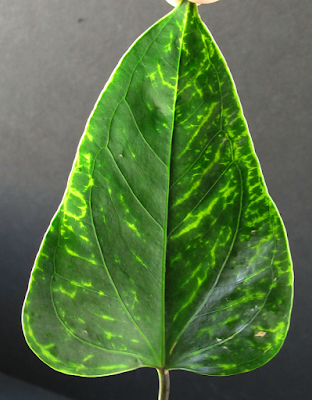 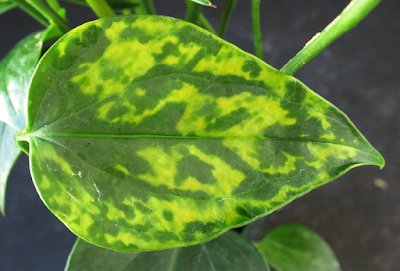 So now the situation is that all the clones of one plant, plus the offspring of one of those clones, does this. Which looks like support for the genetic theory, though the only other surviving seedling from the Erlenes (1727 Mercedes Sulay) has normal green leaves that stay green. And also I don't think any of the Erlenes ever produced a leaf that looked like the one in that last photo: that's pretty extreme.

Tyler would have been a keeper regardless, for the bloom color and suckering, but as the Erlenes are pretty robust plants in general,6 and I'm interested in whether the leaf weirdness will be passed to a third generation, it's really really a keeper. I doubt it has any commercial value: even if it's not sick in some fashion, it looks sick, which surely wouldn't sell terribly well. But I want it around at least until I understand it.


1 "Unreasonable" = 35.
2 Definitely 1332 Alexis Gabrielle Sherrington; probably 1409 Ramona West and 1733 Jayyvon Monroe; possibly 0650 Phyllis Deen, 1438 Johnny Cockette, 1716 Tess LeCoil, 1718 Charo Beans DeBarge, and 1767 Constance Waring, depending on whether they still seem interesting to me later.
3 Dishonored 2 is incredible. There could be even more incredible games, I suppose, but my gaming tastes are very specific (single-player; realistic graphics or at least not blocky, pixelated graphics; interesting art; for shooters, I like stealth/nonlethal play as an option, if not the whole point of the game; multiple routes to the same end goal; high replayability), and Dishonored 2 sits exactly in the center of, like, all of them.
I've also recently gotten Prey, Thief (2014), Assassin's Creed, and Cities: Skylines, each of which fits my criteria at least a little bit, so I'm going to have something to entertain myself with between rounds of watering for a very long time. Though apparently the first Assassin's Creed is not great and I was supposed to have started with Assassin's Creed 2. I didn't know.
4 Also, for what it's worth, I have tried adding magnesium to the fertilizer, in the form of Epsom salt (MgSO4), and that had no effect. I don't have element-specific sources of other nutrients to try to add, but the fertilizer I use does contain most of the trace elements plants need: boron, iron, copper, manganese, etc.
5 (31 October 2017 vs. 29 November 2017, for the record.)
6 (with the exception of the ghost mites, to which they seem more susceptible than average)
Posted by mr_subjunctive at 3:00 AM

That is quite an interesting coloration on the spathe! Assuming the leaf spotting is not a sign of illness, I feel the variegation was more uniform and consistent, it could well be marketable.

I strongly suspect that this odd coloration is from a virus. I am into hostas too and it reminds me of the discoloration that hosta virus X causes. I would be really careful not to leave these plants close to other prized plants or share tools/pots/etc with other plants.

I guess it is some virus. I had a few of my orchids test positive, as I got them tested after a Cattleya maxima showed color breaks similar to those in this Anthurium leaves. The virus seems to also stunt growth and make the flowers last less, apart from showing unnatural color streaks and distortion. If you use scissors or cutting tools should be disinfected or treated with flame in between plants. I discarded all my virused plants except one that has sentimental value. You could contact Critter creek lab if they test plants that are bot orchids.

Even some botanic gardens have virused plants. I would isolate this plant from others or discard it and keep some flame device to sanitize pruning shears

PS - The discoloration reminds also of leaves of Fig trees (Ficus carica) infected by viruses. The shape of the spathe close up shows some distortion. I find a hybrid like this is not worth the risk of spreading incurable disease to other plants of the collection