This spring, we're lucky enough at work to have not just one, but two different kinds of pesky flies that swarm around the tables when someone picks up a pot. There's the standard-issue fungus gnats, which undergo regular population spikes and crashes but are always present on some level or another, to the point where I don't even notice them anymore, unless I happen to inhale one. Which is unsettling. But then besides the fungus gnats, there's something else: 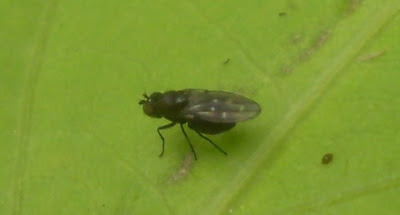 They're called "shore flies," and they're brand-new to me. They look basically like a baby housefly (Musca domestica), but they never get any bigger than about fruit-fly size (about 1/8 inch, or 2 mm), and, in fact, look quite a bit like fruit flies in general, though fruit flies are less goal-oriented. (Fruit flies tend to just kind of drift from objective to objective; shore flies seem to have ideas about where they're headed and why. Or, to put it another way, fruit flies are English majors; shore flies are engineering majors. I'm fairly certain that fungus gnats don't go to college.)

We haven't had a problem with these before, since I've been working in the greenhouse, but now there are suddenly many of them all over. Or, well, not all over: they congregate in certain very specific spots on the tables, anywhere that water collects in the capillary mats, and then someone will pick up a plant and a cloud of flies will erupt from the table and alight on his/r arm. They're worst around some of the geraniums, for reasons which will be explained.

They're also completely harmless, to people and plants, but I have yet to get a chance to explain this to any customers, because the customers don't complain about them to me: instead, they complain to the front counter people, who then tell me that we need to spray for fungus gnats. Like, every single person who works the front counter told me, individually, through various means (including one note with a smiley face drawn on it, which pleased me and irritated me at the same time), a couple days ago. It's actually the shore flies, not the fungus gnats, but I suppose the customers can be forgiven for not making the distinction, customers not usually being the best pest identifiers.

(One lady a few weeks back asked us to spray a plant she wanted to buy for whiteflies before she took it. Like to have given us all heart attacks. Turned out that what the plant really had was fungus gnats, and she just didn't know the difference. You'd think that people wouldn't call little brown-black flies whiteflies, on the theory that whiteflies are probably called whiteflies because they're white . . . but let's not get sidetracked.) 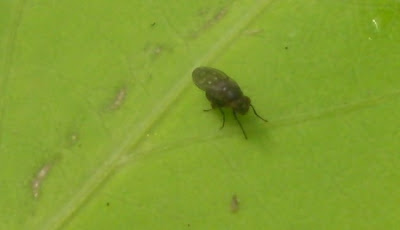 Anyway. So since I don't get to explain this to the customers, I'll explain it to you. Shore flies eat algae and rotting plant matter, which it just happens that the ideal conditions for growing plants in a greenhouse (lots of light, warmth, water, and fertilizer) are the same as the ideal conditions for growing algae and generating a lot of rotting plant matter. Add in that our tables aren't perfectly level, and so water tends to pool in spots here and there, and then factor in the fact that there are geraniums on all the tables, and geraniums in hanging baskets above the tables, the flower heads of which are constantly shattering and sending debris down into the small pools of fertilized water, and what you have is a recipe for shore flies. The good news is that they'll go away as soon as we close up that greenhouse (probably about a month away). The bad news is that I'll hear about this over and over until then, and any customers I explain it to won't believe me and will think I'm lying to try to convince them to buy buggy plants.

You know, I was perfectly happy with winter. We didn't have nearly enough winter here. I just don't see the purpose of this "spring" business.

Yup, must be tough dealing with all the 'joys' of the 'spring' gardening season, bugs and customers included. But hey, if you're looking for more winter, come up here in Canada where we have oodles of it for many, many months. The spring and summer seasons will zip by so quickly, you'll barely notice they were there - bugs and greenhouse customers included. Sigh... I think I'll go buy a plant now to cheer up... :)