The husband and I went to Cedar Rapids on Friday: I'd wanted to check on Pierson's, to make sure they'd come through the flooding okay, and also to look at plants that I didn't have to take care of, and we both sort of wanted to look at the downtown area to see the extent of the damage for ourselves. Which was, yes, gawking. Well before we were done, I was pretty ashamed: feeling a pretty strong sense of we should not be here, now.

There are, of course, huge chunks of town that were more or less unaffected, where business proceeds as usual, but in the parts of town that were affected, I didn't really have to aim the camera. Any direction I shot was going to show something. So, without further ado, I give you Cedar Rapids as of June 27, 2008: 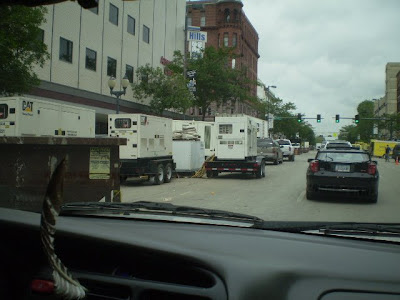 Downtown is full of guys running around in white hazmat outfits, big dumpsters on the street, and lots of cleaning companies, dehumidifiers, etc. Traffic moves, but slowly, and all the equipment narrows the streets down considerably from what they usually are like. 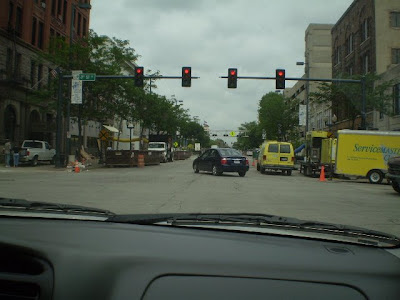 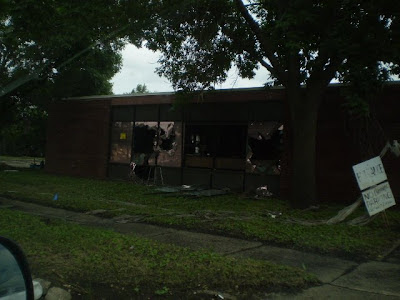 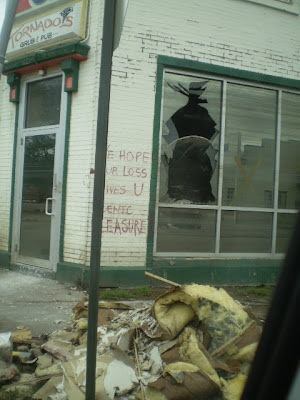 The message is "WE HOPE OUR LOSS GIVES U SCENIC PLEASURE." Interpretable in more than one way, but it doesn't, you know, sound particularly friendly. I was assuming it was sarcastic, which made me 1) want the picture more and 2) feel more ashamed of taking the picture. 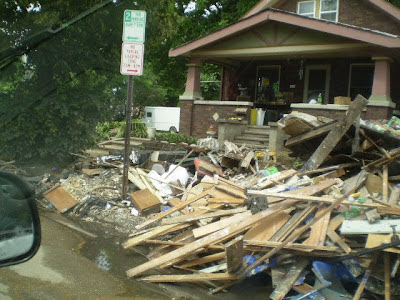 Piles upon piles of garbage. Siding, washing machines, tires, chairs, paper, swingsets -- all the stuff you've got in, on, or around your house, soaked for a week and a half in toxic water and then collected in piles. 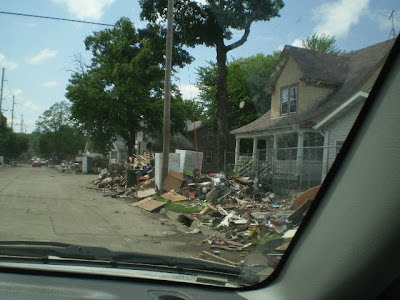 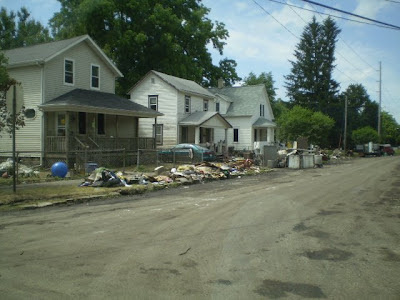 Something that fails to show up well in the pictures: everything's also covered in dirt. I mean, in the pictures it looks like just a road, but in person, it's muddy and smelly and neverending. 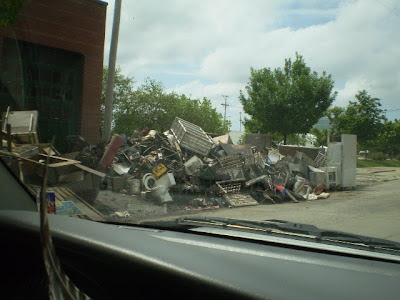 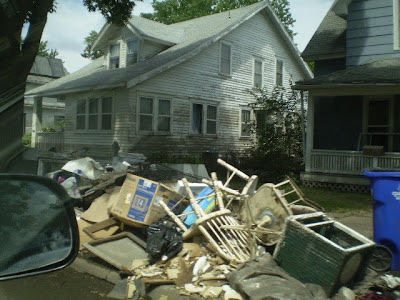 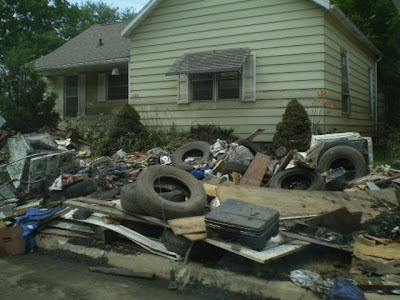 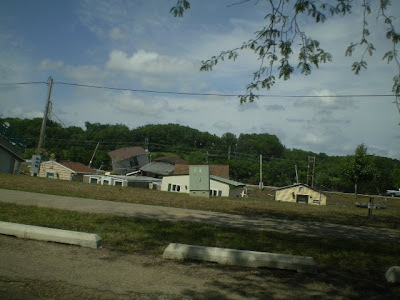 Houseboats on the (still very high) Cedar River. Can't really tell from looking at them what kind of damage they sustained, but it's obviously not all fine. 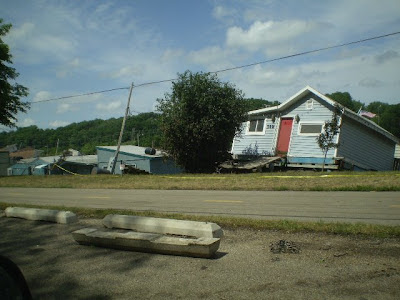 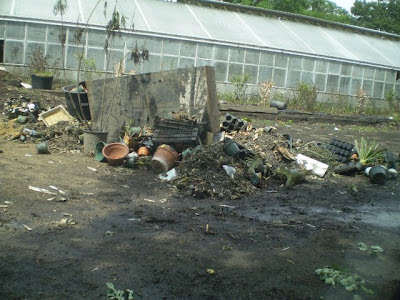 And then the part that shocked me: Pierson's. The business is not gone altogether, because they had two locations: this one, the original, which was where the tropical plants (most of them, anyway) lived, and then another one elsewhere which seemed to be mostly for flower deliveries. The latter is far from the river and therefore fine, but the original location is basically ruined. Some plants barely visible in this pile: some unknown bromeliad, a sago palm, a croton. 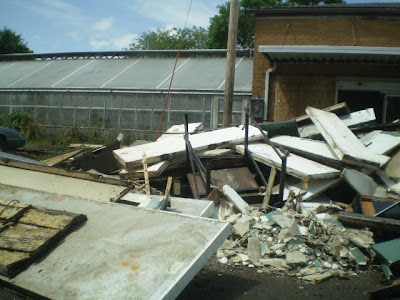 A couple panes of glass were broken in the greenhouse: I couldn't really see much in there, though it was obvious that there were plants in it still. I couldn't really tell if they'd moved anything out or not: either a bunch had been taken away before the water hit, or else a bunch fell over in the water and nobody had been in the greenhouse to pick them back up yet. 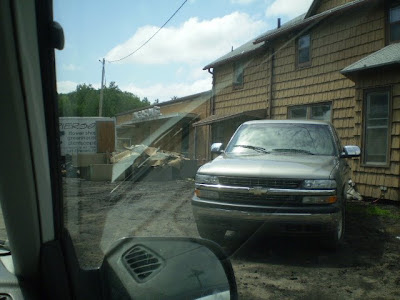 Couldn't make out much of what was going on inside the store, either, though some of the walls didn't look like they were there any more. I could kind of make out a couple studs with debris hanging off of them.

Pierson's is especially sad to me because I can relate: Pierson's is to Cedar Rapids more or less what my employer is to Iowa City, and we were at one point expecting to get more or less what they got: we just dodged the bullet. Plus, on a completely self-interested note, I now have that many fewer options when I want to go out of town and buy a tropical plant. But it's hard to look at that and not wonder what they're all going to do. I mean, the oldest greenhouse was indeed very old, and if they were insured, then they might be better off in the long run to be rid of it and build a brand-new one. But how likely is it that they were insured? They were only a block from the river, it turns out (seems longer, somehow, driving to them). So maybe.

I was kind of telling myself while taking pictures and feeling ashamed that it was okay, karmically, because I was going to be posting them for other people to see, and that meant there'd be help coming, and I was therefore doing something useful even though I wasn't, you know, doing anything useful. But that's kind of a crock of shit. I mean, people knew there was a flood anyway, help was already coming. I was just taking pictures because there didn't really seem to be much else to do, because it was too much to take in all at once, because it was impossible to look away. It's pretty overwhelming in person.

Wow. Devastating. I went on a work trip to the Mississippi coast about a year and a half after Hurricane Katrina, and the piles of trash in front of the houses look just look those in your pictures. And that was a year and a half later.

That graffiti slogan on the white building is just weird. I don't know what to make of it either, but I don't think it means "best wishes".

I feel so sad for the homeowners and the business owners who have had their lives turned upside down and are possibly facing financial ruin.

I did a slide show years ago for my church and tried to get some discreet pictures of homeless people. It was for a good cause but it still made me feel crappy.

I'm sorry about Pearson's, but in my case it would probably be a good thing if the supplier of my plant addiction were no longer around to enable my addiction. Not that I wish destruction on any plant business though!

Gawking or not, thanks for this post. It'll go in my next newsletter.