UPDATE 4 Aug 2009: The plant in this post is in fact not a Disocactus. What it is, is a Pseudorhipsalis ramulosa. It was sold to us (where I used to work) as a Disocactus, so that's what I called it. I would rewrite the whole post to reflect this, but that would be an awful lot of work to go to for an old post that nobody is likely to read anyway, so instead I'm saying this. Sorry for any inconvenience and/or confusion.

This is a Disocactus. I initially misunderstood it as Discocactus, but no, Discocactus, though it actually does exist, is a different thing. (It looks more or less like a regular barrel-type cactus, with spines and ribs and all. Another way to tell the difference: when grown in good conditions, sometimes a Discocactus has to boogie oogie oogie 'til it just can't boogie no more. Though this is rare.) 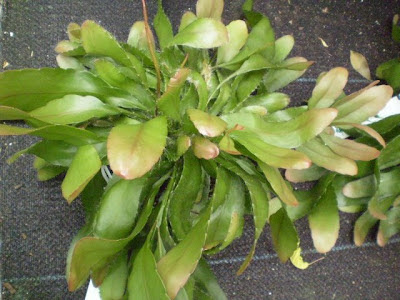 At least, I thought it was a Disocactus, because that's how it was sold to us. And also 'cause WCW said it was, and she's almost always right about these things.

They're nice enough in their own right as plants, of course. In full sun, they change colors from green to red, which is kind of pretty (though I think it takes a lot of sun), and if they'd been just a slight bit smaller and cheaper I probably would own one, but I don't.

We also had a customer in a while back who wanted to know what kind of Disocactus we have, because apparently they come in kinds. There are some that have red flowers, and some that have yellow, or white, and some of the flowers are big, or small, or etc. I had no idea. Neither did WCW. 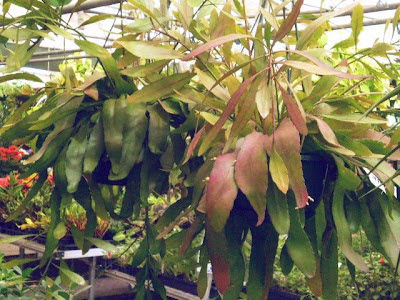 Then recently, they started growing little bumps along the edges of the leaves, which was weird but not really noteworthy: for all I knew this was an alternate way they budded off new stems (or leaves, or whatever they are).

Then the bumps turned into flowers. So now we know: white. Also tiny. I'm a little disappointed that they're not more dramatic, but at the same time, well, it's something new. 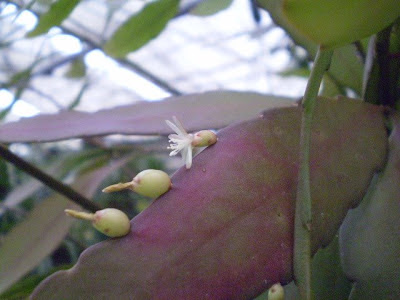 It may yet be, WCW's considerable expertise aside, that these aren't technically in the Disocactus genus: I wasn't able to find anything that looked like these in an admittedly hasty and non-thorough search. I found better likenesses among the Rhipsalis and Epiphyllums. I'm not betting against WCW: I expect this just means I should do a more comprehensive search.

This is a very ODD plant...

Hi! Sorry I haven't written back yet, last week was NUTS. Anyway, just wanted to say that this looks like a Rhipsalis to me. There are quite a few flat-leaved ones like yours: R. oblonga, R. elliptica, R. pachyptera, R. crispata... This site is incredibly thorough, maybe you'll find it here: http://www.rhipsalis.com/species/pachyptera.htm

Hrrm... turns out some of the Disocactus are now or were at some point "Pseudorhipsalis" - P. ramulosa looks a bit like yours maybe?

I just purchased one of these today and having never heard of it before ran home and did a search and ended up here. I really thought was related to a night blooming serius at first but it also looks very much like my rick rack catcus. Thanks for the photo that helped me identify it.