I know I said the Araucaria bidwillii profile would go up today, but I just didn't have the time to quite finish, plus I was having some issues with the heat yesterday (not sick so much as just tired), so it's been postponed. Hopefully tomorrow. In the meantime, check this out.

I don't really have any context for this; I'd never even heard of Lisianthus until maybe three months ago. All I know is, one of the varieties called 'Mermaid Pink' ordinarily looks like this: 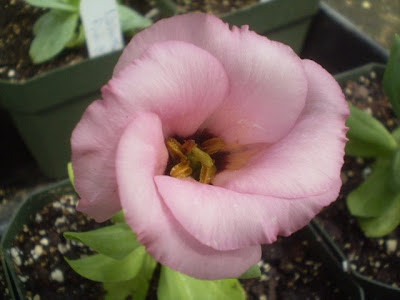 But there's one particular specimen that doesn't, and instead looks like this: 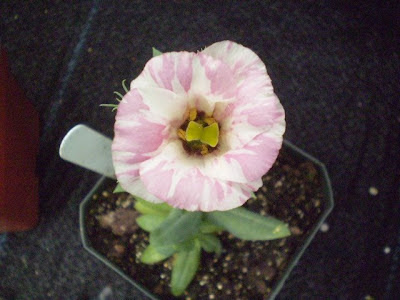 I think this looks pretty awesome, but I'm guessing that it's probably a virus or something causing the splotchiness, and therefore isn't really a cool development at all.

But pictures don't hurt anything, right? 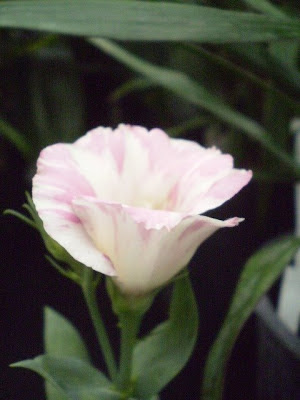 Very fond of the Lisianthus, by the way. They took forever to do anything, granted, but sometime during the flooding, the two short varieties we have all went into bloom kind of at once. (Still waiting on the tall ones.) It was pretty cool to come back to. WCW tells me that they're touchy about being too wet, which means the ones around here probably aren't doing well this year (we actually got another big splash of rain last night, maybe 3 inches, and there's supposed to be about that much again over the course of the next few days), but I definitely see the appeal.

Posted by mr_subjunctive at 3:47 AM

That "splotchy" flower is lovely. Perhaps it's a sport? Might be worth saving seeds. Can you propagate through cuttings? This is a new flower to me. Probably doesn't do well so far south (grow region 9/10)