Repotting Boston ferns is a pain. They're big. They have fronds flopping every which way, there are often dead fronds around the base of the plant, right where you have to add the new dirt, which can be so stiff they're sharp. And so it's kind of an ordeal.

But when I was getting ready to repot a customer's plant on Saturday, I had an idea. Here's what I did.

I cut a piece of plastic from a roll we've got in the potting room.

I popped the fern out of its old pot.

Then I rolled the foliage up in the plastic and then taped the plastic to itself, basically making it into the scrunchie for a fern ponytail: 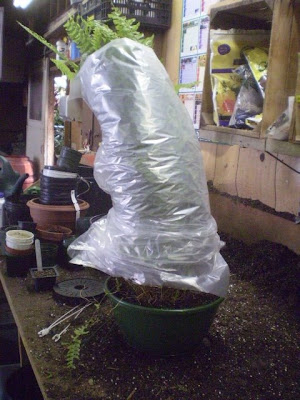 I repotted with this on the plant, which kept the fronds out of my way and let me get my hands in close enough to add the dirt around the root ball, and then when the repotting was finished, I pulled the plastic off -- 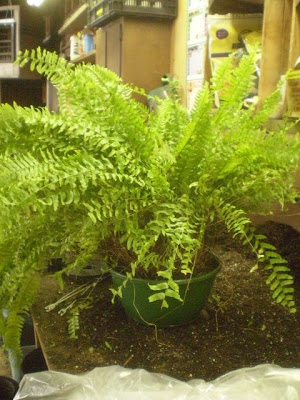 Granted, it's a little bit complicated to wrap the fern in plastic in the first place, but I think it's still faster to take the time to do that than it is to have to keep brushing fronds back so you can see where to put the dirt. Even if it actually takes longer, it's way less frustrating.

One could substitute butcher paper for plastic and the basic theory would still hold up, I think.

Maybe this is not a big deal, and everybody else already knew about this. But I was pretty proud of myself.

What a great idea! That's exactly what I'm going to do from now on. Thanks for sharing!

That is an excellent idea. I tie a foam plant tie around the fronds so they look like a top-knot, but that does occasionally damage some of the fronds. It's such a messy fern.

Great idea and it doesn't hurt the plant in the least.

What a great idea! Recently we replanted a large sword palm that just about cut us to ribbons. As a solution, we put a sleeve like one you made around the bottom of the palm and slid it up the side. Worked like a charm.

I think you came up with the perfect solution to the Boston Fern. It's not something we'll be putting in anytime soon but if I even need to... the Fern Scrunchie (you gotta put that on a late night infomercial!) will be our first choice.

Good for you! That is a topper of an idea and I bet we readers don't forget that one. It could come in handy for several kinds of jobs. Thanks for sharing your out of the box thinking.

You are a genius. But I still refuse to grow Boston ferns, except maybe every few summers hanging on my front porch, when I'm feeling a little Victorianesque. They're messy, and they get rootbound so fast that you can't keep them watered in the summer (I guess now I have to excuse not to up-pot them, though, there goes that excuse). But dang they are gorgeous.