Last year at approximately this time, I had a customer point out to me that there was a disturbing black mold growing on the backs of some of our Aglaonema leaves. This happened on a particularly wet and cool day, and the plants were crowded pretty tightly on the tables (which cuts down air circulation and encourages fungus), so I thought, oh no, we have a fungus outbreak, and I pulled them all out of the greenhouse and wiped each and every leaf on each and every plant with a series of wet, soapy paper towels, followed by spraying them with a fungicide, and it kinda sucked. Took basically an entire day to do.

The mold wiped right off, very easily, and didn't leave a mark on the leaves, and they all stayed clear, into the colder and wetter winter and spring, so I gradually forgot about it. Fluke mold situation, obviously. Could happen to anybody.

Then about two weeks ago, I noticed that it was back: 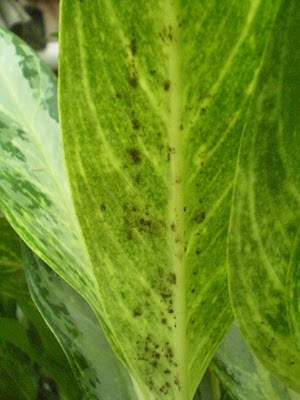 The weather hadn't been wet and cold, and the plants weren't particularly crowded, so this didn't make much sense. The plants had seemed happy enough, too: no dropped leaves or anything. Hell, they'd even just flowered, most of them. But it was definitely the same stuff.

So out came the paper towels again, though I didn't bother with the soap or the fungicide this time. And as I was wiping, I noticed something: some plants had it much worse than others, and even on a particular plant, the mold was much heavier on some leaves. Think, Subjunctive, think: what could explain this pattern?

And then I realized: the ones that were still moldless were the ones that hadn't flowered yet. Which, some of the flowers had had droplets of something sticky (nectar? some kind of flower-related guttation?) on the spathes. And it would make sense that the mold would happen at the same time of year again, if the Aglaonemas flowered at specific times of the year, like most plants do. So I went through and cut off all the flowers (which I possibly should have done anyway: people buy for the leaves, not for the flowers, and flowers do take energy to produce), and so far, the mold hasn't come back again.

I need to keep watching them, but I'm hoping that I solved the mystery, and can keep this from happening again next year. Maybe we won't know until then, though. Anybody else seen this one?

Well, I've never seen the mold, but I've seen LOTS of ags over the years. At work, we are quite anal-retentive about pinching out the flowers ASAP. We never have mold. Cause and effect? Could be. Because our storage facility is ANYTHING but well-ventilated.

Just had another thought - hibiscus growers are always warning about "black sooty mold" developing on the leaves after you get honeydew from whiteflies or other pests. So yeah, I'm guessing the sticky flower stuff from the ags will do it.

I have a very healthy looking Agalonema which is showing the same symptoms. I see mold like black spots on the underside of many of the leaves. Would be grateful for any tips to remove them and prevent them from coming back. Thank you in advance for any and all help :)