You hear about these things, but never think you'll experience them for real.

Let me explain. I don't remember where I first read about 'Sharry Baby,' but the idea of an orchid that smelled like chocolate was interesting enough that I remembered the name. So when, a couple weeks ago, I saw 'Sharry Baby' on an availability list, sure, I went for it. Let's see these supposedly chocolate-smelling flowers. 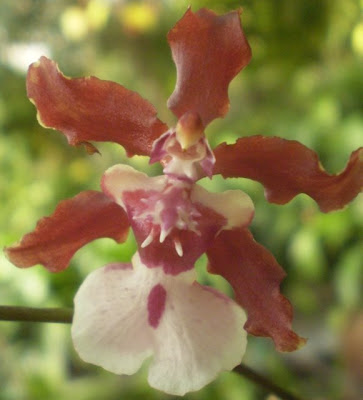 Incidentally, the colors in these pictures aren't very true to life. Depending on the light, it either looks like a pleasant brick-red color or like a deep red with a hint of blue. The picture below is a little closer to reality.
The flowers aren't especially interesting to look at, except I guess insofar as all orchid flowers tend to be more interesting than your average flower. But who cares, right? We're wanting a good smell.

So I tried a few different times on Saturday. First sniff was maybe around 9 AM, and wasn't particularly interesting. Not a strong scent, and what scent there was wasn't very chocolatey.

Third sniff was around 4 PM, and it smelled faintly, generically floral, with no particular element of chocolate as far as I could detect.

When I tried checking in on the same plant during the day on Sunday, it was fairly consistently chocolatey throughout, though the smell was still sweeter and more candy-like between about noon and 3 PM. No huge difference between days, though Saturday was hotter and sunnier. Maybe that explains something. 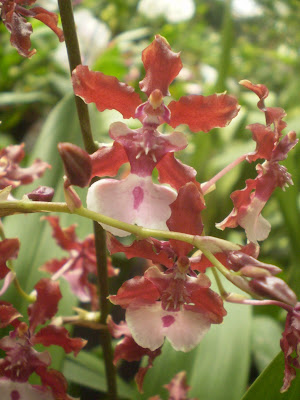 It's not unusual for flowers to smell different at different times of day, though usually the change is in intensity, not type: Hoya carnosa fragrance peaks around midnight, for example. There are other houseplants whose scents actually change in character over time, though: Sansevieria trifasciata is a weirder, somehow sad smell when the flowers are first open, and becomes a more generic floral as time passes.

I suppose it would be unethical to video your customers?

Esther Montgomery
ESTHER IN THE GARDEN

Hi Mr. Sub, I had to comment here because I have one of these orchids that has rebloomed faithfully for over ten years, even in poor conditions, like covered in drywall dust and no light during our renovation in 2000. I had no idea it was supposed to smell like chocolate until last year when Garden Rant did a post about it. I commented after sniffing that it did not smell of chocolate to me, making a total idiot out of myself as usually happens when I comment on there. In the evening when I went into the greenhouse/sunroom, the whole room was filled with the fragrance of what you describe as cadbury creme eggs. I had to go back and leave another comment but of course it was too late to redeem my foolish remark. Good job with the capture, I have not been able to take a decent shot of the flower yet.

HOORAY!!! I love Oncidiums! They tolerate my neglect and bloom frequently!

Check out Oncidium 'Twinkle'. They're minis and also have that lovely chocolate-vanilla smell. They come in a couple of color schemes; white and gold, and maroon and dark pink.

They are easy to grow as houseplants in a bright cool location and are faithful bloomers. Some plants smell better than others, this is really obvious when they are next to each other.

I have one of this and I really love its smell. But I never realize tha is Chocolate! you are right!

mine smells like vanilla not chocolate.
can some one tell me where to cut after flowers all fell.