Gesneriads and I have had something of a falling out lately, which I've made reference to elsewhere, for example in comments at Kenneth Moore's blog. It's not that I wouldn't like to like them. In fact, it's completely a sour grapes thing: I have too many other plants around to be worrying about keeping up with the watering on Saintpaulia and Streptocarpus, which means they don't do well for me, which means I don't like them. And some of them, like Columnea, didn't even do well for me at work. So screw you guys, I don't think your flowers are pretty anyway.

Maybe mealybugs. I bet it's mealybugs. That would be just like a gesneriad.) 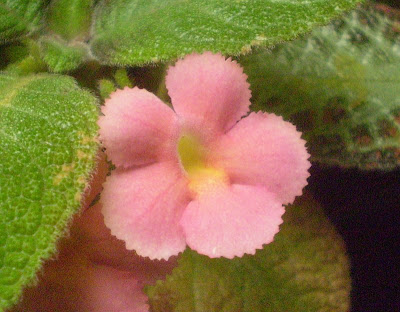 The reason for mentioning this is, my ex-job got in a whole bunch of Episcias at the beginning of June, and they were spectacular, but I didn't get one because everything I've heard about them says that they're touchy: high humidity requirements, but no water on the leaves, don't get them too wet but keep them evenly moist, etc. I didn't see a future there. So I settled for getting a close-up picture of the flowers. I don't really find this flower all that impressive; some of the other varieties had flowers that were much cooler. Unfortunately, this was the only picture that turned out even remotely well, so it's the picture you get.

We hadn't even ordered them previously, although they'd been available, because WCW had told me that they hadn't done well when we'd brought them in previously. Probably we should have ordered them anyway, because they apparently do sell. Either that or more than half of them had already had to be thrown away within a month of their arrival, which is also possible.

Who out there has experience with Episcia? Am I being unfair?

My Episcia "Coco" is doing fine. I have only had it for two weeks, of course, so I will let you know how it does. The general humidity in the area is about 50% on average, and I've been spraying 'cause of spider mites (but I get water on the leaves and they don't seem to care). I'll give you a more detailed update n a year. :-P

Many years ago, when I lived in central New York State, I was given an Episcia by my mother. It was a red flowered variety and it was around for many years with first her and then me. Every summer, in July and August, it had a big burst of flowers and a few more sprinkled throughout the spring and fall.
We didn't do anything special except basically treat it like an African violet.
However, it is not a plant you can expect to thrive left to its own devices. It does need attention and a little pampering. It is worth it though because the leaves are gorgeous and the flowers provide a beautiful contrast.

Mine does just fine in the kitchen window, in a (horrors) self watering pot. Maybe it's just that I'm better suited to cactus, but those self watering pots are the only way I can deal with them, otherwise the proper time to water seems to be when I'm out to dinner, or working or somewhere else entirely.

Self watering actually seems like a good idea for these.

My mom had one for about two months doing alright but anytime she forgot to water it the whole thing collapsed and would never properly recover so we'd cut it back and it would start growing again... until the time it didn't.

I sort of want to try another in a terrarium using wick watering just because they are pretty cool but never again under low humidity using standard watering.