To finish out what has accidentally become Cereus peruvianus week here at PATSP, I have a random plant event that I was not only not expecting, but that I wasn't even aware could happen: one of my plants has a new sprout coming up out of the soil: 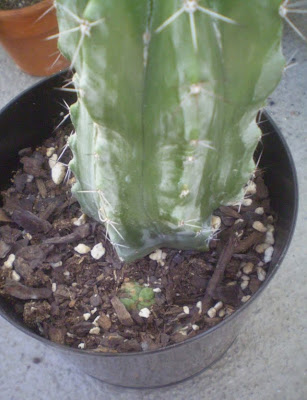 I don't know what's going on here exactly. Not only was I not aware this could happen, but when I searched on-line for information about it, I couldn't come up with any pages that mentioned it happening. "Cereus peruvianus sucker" didn't get me anywhere, nor did "Cereus peruvianus offset." And yet, it's obviously there. 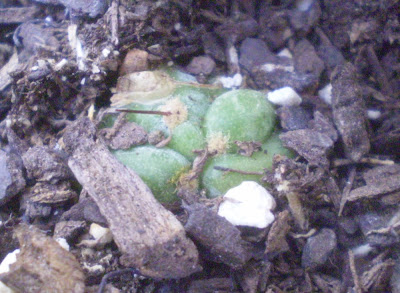 It can't be a seedling: none of my eight plants have flowered in the three or four years I've had them. Even if they had, all eight have been repotted at one point or another, so the seeds wouldn't still be in the soil even if some had managed to grow buds, flower spectacularly, and develop fruit without me noticing. And a seedling wouldn't develop a growing tip that large while still under the soil.

So I'm forced to conclude that this cactus is branching below the soil, for some reason. None of my other plants, even the ones that are verging on eight feet tall, have branched for me, but this little eight-inch-tall (including the pot!) guy is. Why that one? Why now? Why from underground?

Don't look at me. I didn't even know this was possible.

Interesting... Maybe you just got a cantankerous plant that's gonna do whatever it wants. It's probably sitting there thinking "well, if he thinks I'm gonna just go straight up, he's got another thing coming... I'll show him!"

I've seen them used as fences (not even goats eat them I guess) but no habla espanol, at least not enough to ask how they managed to get them so thick - suckers? Imagine your picket fence bursting into glorious bloom some night.

I would just be thrilled (aren't you?!) that mama is happy in her home and producing for you ;) But I know your inquiring mind wants to know HOW...WHY??? Like your blog title states...lol.

When you potted it up, were there any areoles below the soil line? A cactus can offset or bloom from any areole.

Claude has a point. If your plant was grown from a cutting, it may simply have been old enough to start branching out and it just decided to grow a branch from an areole beneath what is now the soil line.

I couldn't swear to it, but I think this plant was probably seed-grown. When I first bought them in Nov. 2006, there were three plants per pot, and I divided them. It's been long enough that I'm not positive, but I think they were sort of shaped like a fat cigar, tapered on the bottom. If they'd been grown from cuttings, there would have been an obvious cut, still, correct?

There were, almost certainly, some areoles below the soil line. I sort of dimly recall not enjoying the repotting process because I couldn't always see the spines.

Not neccesarily... It's common with these plants to grow them from log cuttings. That's where you take a 1 to 3 foot section of the plant stem, cut at both ends and lay it flat on the ground, then half bury it. The 'log' will then send roots into the ground, and all along the top it will send up new growing tips. These tips are then broken off and rooted. If this was how they were grown, then the cut where they were removed from the parent log would be about a half inch to an inch wide, where the branch came out of the areole. After they were rooted they would be more cigar shaped. If they were seed grown, they would be grow to about a foot tall before they'd be getting as wide as a cutting.

I read back to some of your past posts... are these plants that had been attacked by Mealy bugs? If so, the plant may be doing what it interprets as self defense... the plant feels like it's existing growth has been damaged or is under attack, so it's sending up new side growth (ok, that's a bit of an anthropomorphic stretch, but I hope you know what I mean...)

The log-cutting theory would explain it; I didn't know these could be propagated that way (I would have assumed they'd just rot).

The mealybugs lasted longer on the older, much taller two plants; the six small ones had mealybugs to one degree or another but the infestation never seemed particularly dire on any of the plants, just persistent and hard to eliminate. This particular one is the shortest of the six short ones, and they were all more or less the same height to begin with, so it's likely that it was under some sort of stress from somewhere, whether it was the mealybugs or not.