The term "walkaways" officially replaces "stuff I didn't buy" for the posts about interesting plants I didn't purchase. This kind of makes it sound like the plants walked away from me, instead of me walking away from them, but we'll let that slide: it's snappier, doesn't take nearly as long to type, and describes the situation well enough for my purposes. Thank you to N.N., who suggested the term by e-mail. (I'd use your full name, but I thought maybe you'd rather have the anonymity. Let me know.)

These are all from my ex-work.

First up is Agave geminiflora. Not a terrible-looking plant, though also kind of plain. And the tips of the leaves are in fact really sharp, and it was $25. So I didn't buy, though they had several of these so I can change my mind later if I want to. 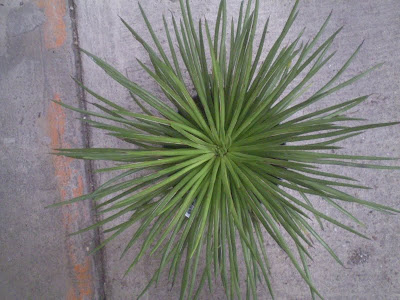 The resemblance to a Koosh Ball (do they still make those?) is amusing. Though you wouldn't want to play catch with one of these. 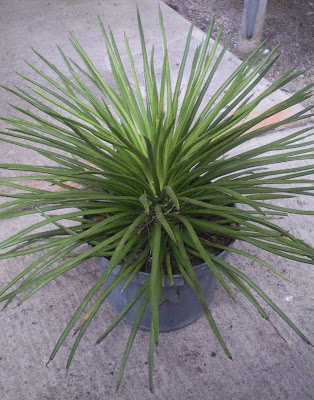 Next up, Pachira aquatica, which for some reason we had a lot of trouble getting in while I worked there. Not that I tried that hard: it wasn't like the customers were demanding them or anything. (In fact, I don't think I ever had one single request for a Pachira, in a year and a half of working there.) But it didn't matter, because when we did try to bring them in, we didn't get them for one reason or another: failure to make a minimum order, trucking company error, or whatever. I don't remember everything that happened.

Anyway. Lowes had them often enough that if I had wanted one, I could have gotten one, and I am apparently just not that interested. I'm partly put off by the number of Pachira-related posts at Garden Web, which make them sound difficult. I don't know if they are or not, but Schefflera arboricola covers similar ground and I know how to care for Schefflera already, so who cares about Pachira? 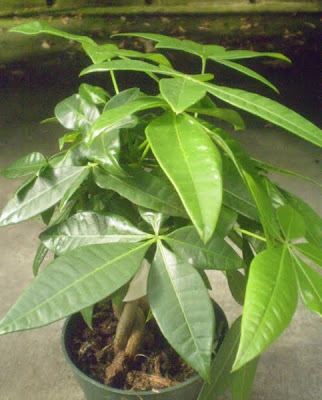 And then finally the real reason for the post, Alocasia rugosa melo, which WCW was so enthusiastic about that she all but dragged me into the back room to show it to me: 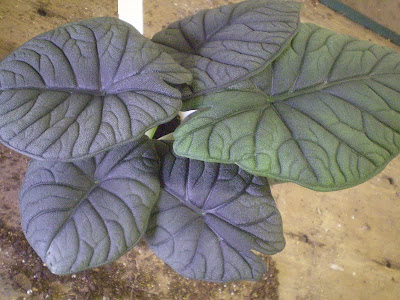 The leaves are approximately the weight and consistency of non-corrugated cardboard. Like, cereal-box cardboard. And the texture is . . . I'm at a loss for words to describe the texture. My mother had a 1960s hard plastic suitcase that came close.

I took these pictures a couple days after they got the new order in, and when I went back a couple weeks later, it was nowhere to be found, which makes me 1) glad I took the picture on the first visit and 2) suspect that WCW has a shiny new Alocasia melo at home now. I wasn't especially tempted by this either, having heard enough stories about indoor Alocasia catastrophe to fill a book, and anyway if I were going to throw away money on an Alocasia from this last order of theirs, it would be 'Frydek.'

Surprisingly, I've mentioned 'Frydek' in three posts now without ever having posted a picture of it. I haven't even taken any pictures of 'Frydek.' I will try to remedy this the next time I get out there.

Pachira aquatica does so well for me I can't imagine what/why with all the complaints and problems. As with any plant, it's nice to know what they live like at home and try to at least accomodate the basics. But no problems here and if this isn't a challenging place for them I can't imagine what would be (cold, dark winters, gas appliances, salt air, all the Maine benefits). But how could you walk away from that Alocasia? I would have grabbed it - not that I could promise it a good life, but I'd love to watch the evolution of those leaves as they unfurl. Alas, not likely to show up in my neck of the woods. Thanks for the pics.

I actually HAD to buy a Pachira, and probably from Lowe's, for it's cool braided trunk and star-shaped foliage. The new growths are a pretty color, (soft tan/pinky)too. But that alocasia would have screamed my name! Guess 'Frydek' is more spectacular...?

I like that Alocasia a lot, but I don't grow them indoors anymore. My Frydek was a spider mite resort!

Agave geminiflora grows here outside in the desert in full sun. Is it a houseplant where you are? I wonder if it would get enough sun inside or if it would freeze outside? It is plain and doesn't do much but stay green and healthy looking here--but that's saying something in Phoenix in summer!

It would have to be a container plant here, at the very least. Davesgarden.com says they're only hardy to zone 9. I don't know whether one could be grown indoors or not, but I'm growing other Agave spp. indoors year-round now, and they seem to be coping with it okay, so I'd be willing to gamble with geminiflora if I could find a smaller, less-expensive one.

Well, it would have been enough that it was an Alocasia, but also WCW had said she was trying to decide if she wanted to buy it, and I wasn't going to try to buy it out from under WCW. Particularly not if it's a plant I expect will be difficult, but even if it weren't.

I don't remember what the complaints and problems were with Pachira, just that there seemed to be a lot of confusion about watering.

Here is the answer to where the incorrect name appears to have originated,

Pete Boyce is a friend and we trade email virtually on a weekly basis. Pete just answered my note with this response, "Apologies that we're a bit late replying, we spent the holidays in Brunei, returned back late last night. This is Alocasia melo. I have told Agri-Starts MANY times that the name rugosa is fictitious!"

Agri-Starts is a great company as well as a supporter of the IAS. They have made many plants easily available to growers at a low cost. However, they do have a tendency to use "made-up" names when the correct name is known to science. I suppose this is done in order to market the product. As a result, you are going to continue to see it sold as "Alocasia rugosa" but that is not what it truly is.

As for the name on the net Alocasia melo 'rugosa', that name is not a registered name, simply another made up name. Someone likely did that because they were trying to convey the correct name but included the fictitious name since many people already know the plant by the bad name.

In order to correctly use single quotes around a name the plant must be a registered cultivar and the International Aroid Society is the registry for aroids. As far as I can determine, no one has ever requested to register that name so it simply becomes a "common name". Any grower is more than free to use any tag they wish on their plants, it is simply up to the grower to refer to any plant by any name they choose. The name "rugosa" for this plant should be thrown in the trash.

I have also asked another of the authors Alistair Hay with whom I sometimes correspond to also comment on this thread.

You can see photos of Alocasia melo on the International Aroid Society website: www.Aroid.org

Best wishes, and keep up the great work.