A combination of unusually bad time management, a Flash-based online game, an upcoming plant profile that sometimes seems like it needs to be a two-parter and sometimes doesn't, a broken windshield, and probable but unconfirmed acute polyurethane-fume poisoning have left me with no pre-written posts at the same time as I need to start another plant-watering cycle, so the posts may be kind of lame for a while.

Before you ask: the windshield was self-broken on Saturday, from the inside, because it turns out that a space that should have been 8 feet long was actually more like 7 feet and 11.75 inches. And of course it happened at the stroke of 5 PM, when nobody was available to fix it or rent us a replacement.

Meanwhile. The husband has also been applying polyurethane to the floors in the house in small sections for a few days, which means we've been living with a low level of fumes for as long. Like most smells, you get used to it pretty quickly and then don't smell it anymore, but then on Sunday night he did the whole kitchen all at once and my eyes sort of felt burny, I had trouble concentrating, and I felt sick to my stomach though I didn't actually throw up. We'd go somewhere to escape the smell for a few hours, except the last time we did that, we broke the windshield. So.

Anyway. I mentioned a few posts back, in one of the transmitted light posts, that the Pseudorhipsalis ramulosas at work had been looking really huge and incredible (comparatively speaking) since we'd gotten them in almost two years ago, and promised to provide a picture, so here you go. 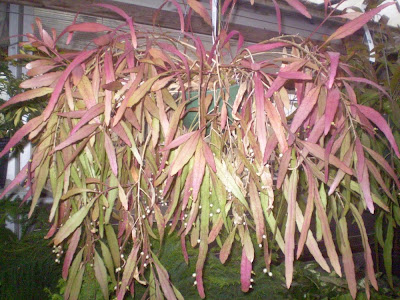 It may or may not be your particular cup of tea, but you can't deny that it's at least very large and colorful. I noticed that some of the branches seem to be drying up again -- this is something they also did last year, and we never figured out why that was or what we were supposed to do about it.

Also, I'd promised better pictures of the "Philodendron 'Cheesecake'" that was actually Monstera deliciosa, and I have delivered on half of that: I got more pictures. Whether or not they're better is debatable; it still might not be sufficient to prove that they aren't Epipremnum aureum, as was suggested in comments, but I think if you open them in a new window and inspect the petioles, you can at least see that they are not grooved from top to bottom, as they would be for Epipremnum. 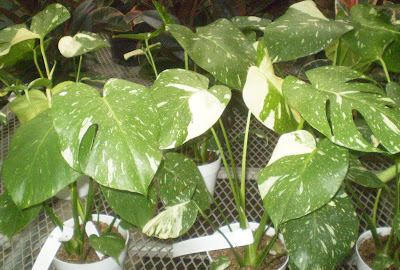 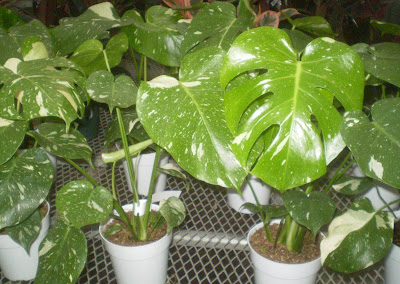 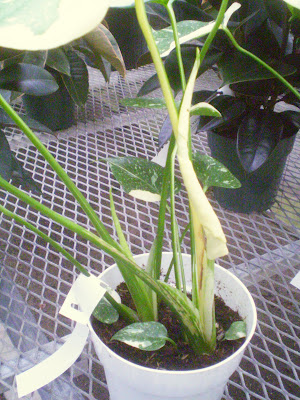 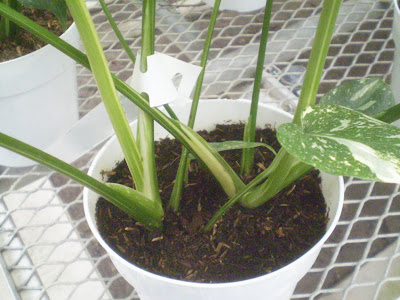 I'm still not especially inclined to buy one, though the price is not terrible and I admit I did think about it a little. Instead, on this trip, I bought a three-inch cactus that I hope is a Pachycereus marginatus and then, at a different place, a four-inch Zamia NOID. Pictures of which may wind up being tomorrow's post.

Now that Pseudorhipsalis is a plant to set my fingers itching. What a beauty (ok, I like the weird ones best). Otherwise not a terrific lot of news - yikes. I'd be camping out in the greenhouse before I'd stay in a house with fresh poly-anything on the floor. And you did leave hanging the question of what you were stuffing in the car that was eversolittlebuttoomuchlonger than the car. I know you have some pretty large plants, but . . .

Better soon in all respects I hope.

Nothing interesting, just a 4x4. Or, actually, four of them. We've transported eight-foot stuff before, but in this particular batch, one of them had to go on top of the other three, and the windshield slants backward enough that this meant there wasn't quite eight feet available for it.

There's a windshield guy coming today to fix it.

It is such a pleasure to find your blog and I appreciate your mention of mine. I put you on my blogroll and look forward to reading your posts.

"Baby" Mosteras are so cute. And 'Cheesecake' looks rather pretty, too. Wish I had room for one. But Monstera is absolutely out of the question. (Of course, I said the same about Pandanus. Now, I have not one, but two.)

Okay, those Monsteras are to die for. If I saw one available around here, it would be mine. I'd figure out where to put it later.

You can keep the Monstera... but the Pseudorhipsalis is something I definitely want... The few times I've seen them available, they're tiny rooted cuttings.

Don't get me wrong, the Monstera is a nice plant, but it's just not calling too me.