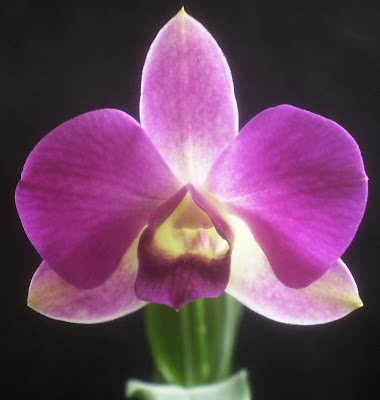 This actually happened a while ago (I think on the 4th or 5th of February), but I've been unusually capable of writing posts in advance lately (much more so than normal; I'm not sure why), so I had other, older, stuff to show first.

'Karen' flowered for me once before, too, and actually seemed happier about it then: it produced two buds that time, as compared to one bud this time. (It had a second one, but dropped it before it developed very far.) I know it's capable of quite a lot more than one flower at a time, but oh well. We get what we get.

I want to note here that 'Karen' is the only orchid, of any genus or variety, that has bloomed for me at home even once, much less two times. I don't like 'Karen's flower as much as some of my other orchids' flowers (If I were going to get a Dendrobium bloom, I'd much rather it be the "Humphrey Bogart" variety.), but at least 'Karen' gives me some flowers. One flower. So I suppose it has to be my favorite.

I hadn't noticed the yellow in the sepals previously. It's subtle, but nice.

I've always had trouble with orchids. Given that this one seems to bloom easily it would probably be worth a try. I actually dropped by Walmart the other day. They only had three species or so but the diversity of colouration was astounding!

Is it just me, or does Karen look a little bit like a bitch?

Everybody's favorite orchid is the one that blooms. We always tell people they need to fed orchids. I do it myself at home, and usually get lots of new leaves.

Considering that 'Karen' is the only one that flowers or does anything, I think it'd be more accurate to say that "Humphrey Bogart" is a bitch.

Well, I do feed them. They just don't care. No doubt I'm doing it wrong.

Sorta feel like I dodged a bullet, w/r/t orchids: I really thought that by this point, I'd be a lot more into them than I am. Instead I'm caring about them less and less as time goes by. Orchids schmorchids.

Though if I see the right Cymbidium, I may still try that, and if the Brassolaeliocattleya were to bloom I might have a whole different take on the family. But so far -- ennh. I'd honestly rather have a Pandanus amaryllifolius.

@Liza "Is it just me, or does Karen look a little bit like a bitch?"

It's a pretty flower, and that's all I'm going to say.

I think poor 'Karen' knows how you feel about her, Mr. S. She's upset and THAT'S why she is dropping her flowers...just to be frustrating!

I too have not had much luck with getting my orchids to bloom. I'm more of a tropical/foliage person i suppose. A friend of mine on the otherhand does super well with his, blooming them every year. His secret is that he dumps large quantities of Phosphorous (Bat Guano) on them in the fall after he brings them in. That, and the cool nights right before brining them in make his winters very colorful!

I have mainly orchids (and a few other plants indoors). This is what I do with this type of Dendrobium.
Grow it year round without rest, good light, short to burning the leafs. The more light, the more flowers. I feed it weekly, weakly... which is feeding with every watering. I use a fertilizer 5-6-7 year round and use about 1 ml in 4 liters. The Den's are allowed to go almost dry, but nut as dry that you would call the medium crunchy. When I water, I always dunk the pots. What else hmmm... they *love* to be root bound.
This way I have 3-4 spikes on a plant each time, with each spike close to 10 flowers. They can bloom from old canes, even the leafless too. Don't remove leafless canes when you repot, unless they are really shriveled and dead.

Not that I think you don't know how to grow these orchids, but maybe you can try to change the things that differ a lot from my culture. Happy growing! I love Karen :-)