I was bopping around the house the other day, like I do, and happened to catch a glimpse of this guy peeking through the thicket of Hatiora salicornioides cuttings. I think it photographed awfully well, considering. 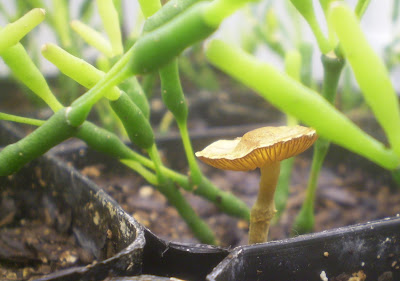 Mushrooms will occasionally appear in potted plants. It can be really alarming, if you're relatively new to houseplants: they're pretty big, they pop up really fast, and they're not something you expect to see. Sometimes there's a weird color, too. (Around the time of the flood, we started having a weird variety of mushroom pop up in pots around the greenhouse: they were fairly normal-shaped, but they were also brilliant, fluorescent yellow. Yellow the way a yellow highlighter is yellow. They were freaky. For some reason, also probably related to the flood, I didn't manage to get a picture of them.)

So the question of whether mushrooms are bad for potted plants gets asked fairly regularly at Garden Web, and something I occasionally was asked at the garden center too.

The answer is: kinda.

Most of the time, a mushroom's primary interest is going to be in the pieces of bark your plant is growing in, and not the plant itself. A fair number of fungi will attack houseplants, but the ones that do are rarely large, mushroom-shaped things. They're usually more powdery, like mildew or soot. The one exception I can think of, from my experience anyway, was this stuff, which I found growing directly on a Spathiphyllum petiole once: 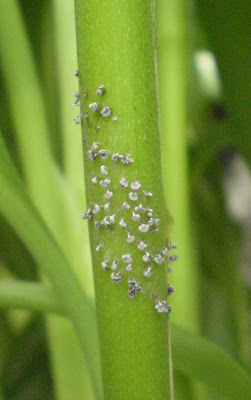 But most of the time, your mushroom isn't going to threaten the plant directly. However. Finding mushrooms is kind of like having fungus gnats, in that it's indicative of overwatering, or a bad potting mix. Sometimes both. The solution in both cases is basically the same: either repot the plant into a mix that will drain faster and dry out faster, or water less often, or both. Because both fungus gnats and mushrooms require a fairly steady source of moisture in order to function, letting your plants dry out between thorough waterings (which is what most of them would prefer anyway) will usually take care of the problem within a few weeks.

In the meantime, go ahead and pull the mushrooms out of the pot and throw them away. They'll eventually stop coming up. 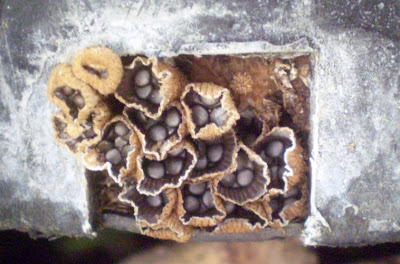 I forget what plant these were in, but this is a nice little collection of birds'-nest fungi growing out of the drainage hole of something or another. They came off the truck like that, if I remember correctly, and didn't last in the greenhouse for very long at all.
I have occasionally bought bags of potting mix that must have had mushroom spores in them. You'll know this has happened if everything you repot for a while sprouts the same kind of mushroom. (I think the aforementioned "highlighter" mushrooms came from a few bags of the Ball mix we used at work.)

I don't think the mushroom in the Hatiora cuttings was from the soil I was using; I think it was my fault. The Hatioras are in a flat with some of the Salvia elegans (pineapple sage) cuttings I'm growing, and the Salvia need to be watered about every three days, so sometimes the Hatioras get water when they don't need it. I doubt it'll make any difference in the long run.

What do you say to mushrooms growing out of your carpet? When I lived in Seattle, a friend moved in with me because her apartment was so damp the carpet was growing mushrooms. Only in Seattle.

Unwanted guest or not, it's still a pretty little thing. Nice picture.

Great post! I've been plagued with fugus gnats all winter. I'm trying to restrain myself ,to the point of wilting before watering my beloved plants.

If you pull or cut out the mushrooms, then just throw them back into the pot, won't that be like adding organic material to your soil (which is a good thing). That is assuming they don't continue growing even if you've plucked them.

Oh if you get to know them, they are such interesting things! Those bird's nest fungi are clever little buggers. Those spore packets are splash cups, and when a raindrop falls in them they throw the spore packets out - trailing long sticky tails that catch on twigs and wind up, pulling the sprores next to the plant. And there's one lovely parasol shaped one that grows only on the dirt floors of greenhouses (may have come over from England). Tons of interesting stuff - and yes, pulling them is just like picking apples, it doesn't kill the organism which is all underground, and which may not be harmful, some of them help the plant obtain food from the soil. If I sound pedantic it's bad habit, I taught mycology in the distant past.