I would just like to point out, for the record, that I'm really not-buying an awful lot of plants lately. I mean, considering the number of opportunities, I'm being very good.

First up, a bizarre Dracaena sanderiana. 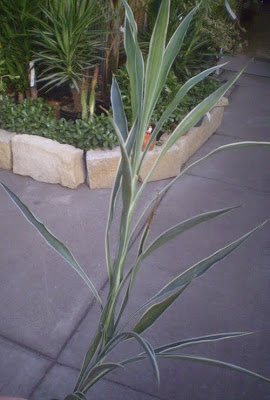 It doesn't photograph well (the leaves are too narrow for the camera to focus on successfully), but that's the best I could do, sorry. I don't see anything attractive about this plant at all, and am kind of baffled that they're being sold. It's like somebody took the only even barely attractive thing about the species, the variegated leaves, and stretched them out until the variegation almost disappeared. I don't get it.

If they must be sold, surely we could at least pot seven or eight stems together in a single pot? One stem by itself just seems sad, guys.

Asiatica sells a variety which is either very similar to this, or which is precisely this, called Dracaena sanderiana 'Whiskers.'

The second one I might go back for at some point; I suspect it's a Huernia (maybe H. distincta?) but I'm not positive, so this is also a Question For The Hive Mind: can anybody identify this for sure as a Huernia, or, failing that, suggest another possibility? I'll go back and get it if it's a Huernia. 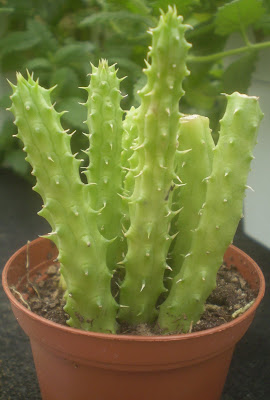 Finally, Syngonium podophyllum 'Pink Margarita.' I'm not a huge fan of Syngonium podophyllum. I want to like it, but Syngoniums either do badly for me, falling apart shortly after I get them and looking like crap within six months of purchase, or they do really well for me, growing like crazy and beginning to vine, which makes them look like crap within about six months of purchase. 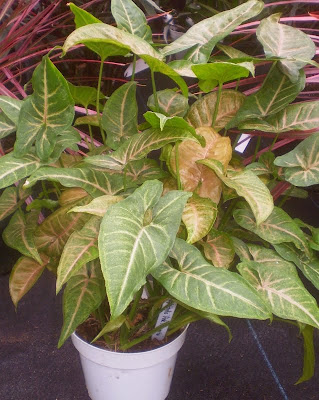 But I'll admit: 'Pink Margarita' is kind of cool. I was tempted. If I thought it'd still look anything like this in August, I'd have been at least halfway to making a purchase.

Your restraint is super human. You deserve a new plant for that. Or at the very least a blueberry muffin or some sort of pastry.

Could be a huernia, or a caralluma.... stapeliads are hard to ID until they bloom, and then they're easy. Maybe it's one of these?

Oh go on, buy a new plant. If for any reason, maybe because the sun is shining today!

I think it's perfectly fine to buy an awful lot of plants... getting them from cuttings is always fun, too.

Is anyone else not getting the pix to come thru? Yesterday it was just the first one, today it was the first and last. Usually I don't have issues with them, which is why I'm asking if anyone else is having the same problem. And, yes, buy more plants. There are worse things you could be doing with your money.

Buy yourself a new plant. I talked myself into buying a bunch of seed yesterday as a treat for giving up soda.

You can justify it any number of ways.

I agree with you concerning the lucky bamboo. I guess it must be the mass hypotic state where everybody wants it.

I found these in a pagoda shape where the canes are cut and sprouts in a different heights, the tallest in the centre and decending in a circular position.

People still buy this stuff and consider keep in them in prayer altars.

And they are expensive.

Definitely you deserve a new plant. I'm good at encouraging such behaviours in others, because I succumb to temptation all the time and want others to come join me on the shameful 'way too many plants' bench.

It seems to me it is a Huernia, and I agree with Peter, it depends on the flower... Personally, I have a Huernia macrocarpa var. cerasina which is terribly easy to grow and has the beautiful velvety-red flowers. It usually flowers at the bottom, close to the ground or to the new sprouts, though, so I have it in a higher-than-ground place to be able to appreciate the flowers...

Could be a Huernia but if not, I'd bet it is at least a Stapelia relative. I'd say go for it. If it turns out to be a Huernia, and something other than H. zebrina, we can later do a trade you and I