Hey, here's something you don't see every day. This plant was sitting with a bunch of Dracaena deremensis 'Warneckei' plants at the greenhouse where I used to work, and something seemed a little off about it. When I checked it out more carefully, I saw that it was in the process of trying to become a Dracaena deremensis 'Lemon-Lime.' 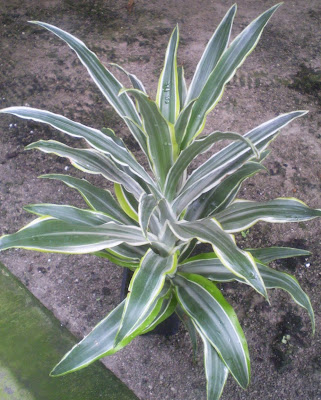 I don't know how obvious this will be on your monitor, but if you look carefully, or open the picture in a separate window, you can see that the plant's lowest leaves look like 'Warneckei' (gray-green center, white margin), then there's a stretch where they look like 'Lemon-Lime' instead (gray-green center, chartreuse margin), then back to 'Warneckei,' then back to 'Lemon-Lime' again for the newest leaves. Plus there are a few leaves here and there which are both white and chartreuse, at different points along the margin.

I almost included this in the last Walkaways post, because it was very, very close: I actually brought it up to the counter and was going to buy it, and then at the last minute I was like no, wait, I don't want this, I have enough Dracaenas already, and this one isn't even pretty. So I put it back. But it was still strange enough to warrant its own post.

Incidentally, something very much like this must have happened long ago, when the variety 'Lemon-Lime' first appeared: I'm told it originated as a sport of 'Warneckei.'

Very cool. I'm always on the lookout for random mutations like this.

It needs you to care for it, it is very pretty. Back you go.

Wow, that's super cool. :3
I don't think I would have been able to walk away from it.

Cool, I admire your restraint.