I don't know why people would, knowing that people are going to be photographing the orchids, set up a black and white grid as the background. No good can come of this; it's just going to mess with people's eyes as they look at the flowers. And that goes triple for a flower that's already this dark -- may as well light it with a pink strobe and have the whole display spinning around, as put it in front of a black and white grid. 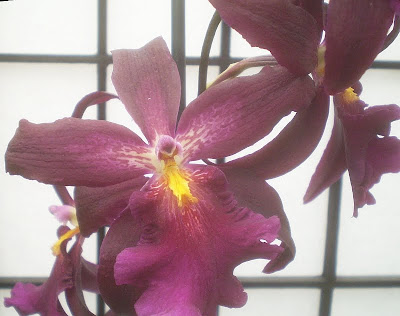 *sigh* But I am not bitter.

I've seen this particular plant before, at work, and am surprised at how much darker this flower is than those were. I don't know if this is due to cultural differences, or normal variation between flowers, mislabeling, or what, but it's a pretty drastic difference. I very much prefer the work flower to the orchid-show flower, because of the spots. (And the photography was better, too, as far as that goes.) 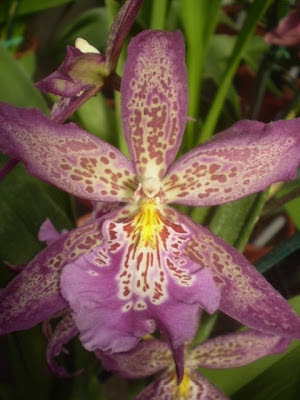 The 'Howard's Dream' from work.
They both have nice qualities, though. The dark purple in the top photo is a nice color, and I kind of like the shape better. So, you know. Whatever.

You're right...they look totally different! A beautiful orchid is a beautiful orchid. But I would definitely chalk it up to mislabeling. Do you grow (m)any orchids yourself? I don't have luck getting them to rebloom and I really don't like the look of the plants when NOT in bloom...

As a group, the orchid family really hasn't lived up to my expectations, but I'll keep them as long as they stay alive. No doubt if they ever do become consistent bloomers, I'll start liking them a lot better.

After seeing Mom's orchid with like, 12 blooms on it, I gave my last orchid away. Screw the little bitches - I'm not patient enough! That is why you are great, and I am not.

The foliage on some of them is borderline interesting, though. I mean, the mottled Paphiopedilums are attractive even if not in bloom, as long as they're not dropping leaves all over the place too. And the Brassolaeliocattleya has recently started to grow some big, interesting leaves -- it's not what you'd call pretty, but I don't insist on pretty.

Still not my favorite plant family, but I like them better now than I did, say, six months ago.

I adore orchids, but admittedly am a beginner. These photos are wonderful, even with the black and white grid which is pretty ridiculous!. The shape of the second speciman is more interesting, although the rounder shape of the 1st catches my eye more. Pros and cons of each...both very lovely!

I am so tentative about orchids, generally... But I do appreciate the spotting on the bottom one, even though I think it's a bit busy.

I think orchids are like artwork. Some people just collect them because other people do, some people do because they're obsessed, but others have to find just the right one that makes the statement they want to make. It's like finding a part of your soul. Except not really that important. But for me, bonding with an orchid is a difficult process, whereas I could buy any number of other plants with nary a thought. Well, "How am I going to pay for food?" crosses my mind, but I quickly shove that into a dark corner...