The husband had a large Dracaena fragrans when we met, not quite eight years ago. Over time, it grew, as plants will. By last year, when we were getting ready to move to the new house, it had gotten tall enough that it was hitting the apartment ceiling, so we cut it back, and threw the top into a vase of water, to be planted later, once things were no longer quite so crazy. 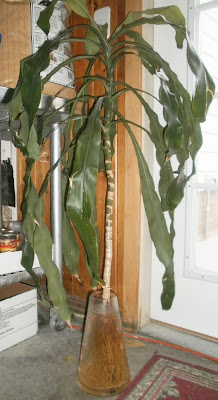 Over a year later, we have a four foot (1.2 m) tall corn plant growing in a vase of water. It's not entirely happy with the situation -- there has been some chlorosis, probably because tap water doesn't have enough iron and/or magnesium to keep it going. I've recently added tiny amounts of N-P-K fertilizer, epsom salts (for magnesium and sulfur), and a trace element supplement for outdoor trees that contains iron, copper, manganese and zinc, and things seem to be getting better, but really the point is not so much whether one can grow a perfect Dracaena fragrans in water for more than a year, but that one can grow one in water at all.

This isn't the first time something like this has happened here; the previous time we moved, a Yucca guatemalensis got cut back and was also temporarily placed in water. That one got planted up within a few months, though. I'm pretty sure.

Now that I've posted about this, I'll probably give the Dracaena soil relatively soon, but I figured it was worth letting people know that Dracaena "lucky bamboo" sanderiana isn't the only Dracaena one can grow in water. I can't imagine why anyone would need to know this, but if you've wondered, well, now you know.

It never in a million years would've occurred to me to put a Dracaena in water! I would've cut the piece, and stuck it right into the dirt in the same pot. They don't need roots or anything.

It is really impressive what you've done.

I wonder if it will be hard to transfer the roots into soil after such a long time. They get adapted to the water and can get grumpy with the change.

It's possible the plant might be reluctant to switch, but Dracaenas tend to be such resilient creatures that I expect it'd manage okay. Maybe some dropped leaves at the start. I'll let you know once I move it.

I did kind of the same thing a few years ago. My grandma gave us a really lanky one so we chopped it up and started a bunch of new plants. I was going to toss the top but then couldn't. I put in a jar and it stayed there for over a year. I'm not even entirely sure where it ended up.

Except for actually giving the plants the nutrients they need that water doesn't have, I did that all the time as a child when my mom was a "Tropical Plant Care Specialist" (read: she went around to businesses and watered the plants they rented from the company she worked for). She took a lot of cuttings, and we had Sanseveria, Dracaena, and tons of other plants sitting around in cups of water all over the house until we got around to killing them, potting them, or giving them away. I don't think any lasted more than a year, and I know none of them got quite so large. That's a true feat, mister!

Aha. That explains a lot about you.

The Dracaena piece was pretty substantial when it was stuck in the water; judging by where the stem starts to curve, I'm guessing it's only actually grown three inches (8 cm) or so since it's been in water. Which is more or less the amount I would have expected it to grow if it had stayed attached to the parent plant.

I have a Dracaena marginata successfully rooting in water along with a piece of Schefflera, just for the heck of it. If I'd known it wasn't supposed to work, I probably wouldn't have tried it!

Not a big plant guy, but was trying to figure out what to do with my 10' plant when I found your post--thanks for letting me know that I won't kill the plant by trimming it and that I can resurrect the cuttings!