As noted a couple weeks ago, my Hoya bella has decided, after a couple years, to give me some flowers. When I first noticed this, I saw two sets of buds; now there are at least four, which is pretty cool. The first set of flowers opened a couple days ago, and, well, they're pretty Hoya-ish -- 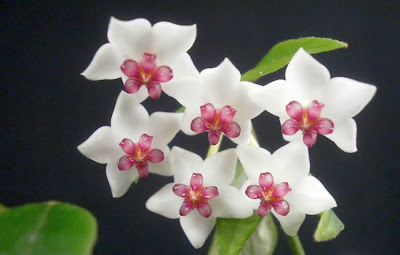 -- which is okay, but I'd thought maybe there'd be a weirder shape or color or something. The rumors that the flowers would smell like candy have, alas, turned out to be false. They do have a smell, but it's very faint, so I can't really describe it aside from saying that it's sort of generically floral and didn't remind me of anything in particular. Thomas's idea (from the comments in the previous post) of putting the blooms into glass globes to concentrate the scent sounds like a good one, but I don't think it's going to be practical for me at the moment, given that the plant still, after two years, doesn't have much of a root system. I really don't like moving it around, even to water; one of the stems swings around in a way that makes me think it may still not have any roots at all, after two years. But still, hey, there are flowers. I'm not complaining.

Slowly but surely, I'm coming to understand how people become obsessive about Hoyas.

I feel ya - they're ok. I must be a little slower than you, but yeah, I can see why people like them.

Sorry, Mr. S., I was suggesting putting just the inflorescence in a globe - the flowers float on the surface. The one I had years ago only flowered once on each peduncle, then shed them. At the time I just assumed this was normal for H. bella, apparently it is.

And if you haven't been here, a link to a site by someone who's really into Hoyas -http://www.myhoyas.com/index-ENG.htm

Wow! What a beautiful little flower.