About a month ago, I took the Cycas revoluta off the shelf to water and it was doing this: 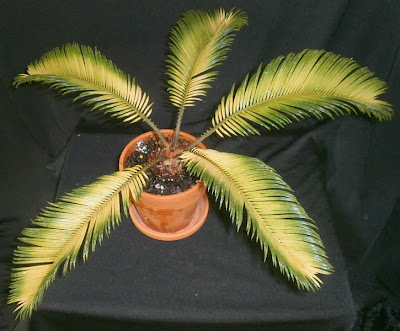 My guess is that it's a nutrient deficiency, probably of iron, magnesium, or nitrogen. I did spray it with an iron-containing trace-nutrient spray, and the parts that were still green appeared to have gotten greener. That doesn't necessarily mean that the iron fixed the problem (it's at least as likely that I misremembered how pale it had been before the iron), but that's my guess. I'm looking for 1) confirmation on the diagnosis, and 2) someone to tell me whether or not the yellowed parts will turn green again, ever (I'm assuming not).

This kind of nutrient deficiency is, of course, made more likely to happen by the way I water my plants. I flush with fairly large amounts of water at each watering, because that keeps salts from building up in the soil. A lot of my plants are sensitive to such salts, and this keeps them happy. Happier. Unfortunately, flushing out the soil to remove unwanted minerals winds up being the same thing as flushing out the soil to remove necessary trace nutrients too. This yellowing is a fairly rare phenomenon for me, because usually I repot things before mineral depletion becomes an issue, and also I add fertilizers to replace the minerals I leach out. But it's still happened a few times (Strelitzia nicolai and I have been through this more than once, for example). Usually I have more advance warning, though: the Cycas bleached out pretty much overnight.

The plant appears to be growing another set of leaves, though it's happening so slowly that I'm not positive, and it's maybe not getting enough light, too, in which case the leaves (should they actually come in) will be grotesque, big, pale things anyway. I didn't really mind until it changed colors on me, but if I'm honest with myself, this whole Cycas attempt really hasn't been going that well.

Meanwhile, I spent part of yesterday fixing up and publishing two posts, one about guest posts and product reviews (because I am occasionally asked), and the other a master list of every plant I've attempted to grow indoors in the last four or five years, and how that's been going, as of May 24, 2010. The latter is pretty dull, but it's there if anyone is curious. Links to both pages are located directly under the Caladium-themed header above. They will be joined by the Infrequently Asked Questions, as soon as I get around to doing that.

Also, I want to wish my Canadian readers a merry and festive Canada Day. May Celine Dion come down your chimney and bring you all the Nanaimo bars, Atom Egoyan DVDs (I really like The Sweet Hereafter, actually), and hockey sticks you asked for.

my experience with Cycas is rather recent, but I'd say your diagnosis is probably right. There seems to be a nutrient prob of some sort...

First, once a leaf has gone yellow, it won't green back up.

second, if the trunk is still firm, not gone hollow or squishy, it can come back...

These plants can handle full sun here in Texas. If you're growing them inside, give them all the light you can. But strongly consider putting it outside for the summer. It will appreciate it...

Some sources on-line claim that these plants are sensitive to clorine in city water. Others say the opposite. I have no idea, my plants get city water when we haven't had any rain and seem to be ok, but I thought I'd mention it...

The fact that the outer margin of the fronds remains green seems to reinforce your diagnosis of a nutrient deficiency. The fact that it occured seemingly overnight points to some other cause unknown.
I agree with Claude that putting it outside for the summer might help, especially if new growth is ready to emerge.
I would also try the minor nutrient solution as a soil drench. The glossy cycas leaves can inhibit nutrient absorption through the foliage.

The image of Celine Dion climbing down a chimney is going to be with me all day. Thanks. Thanks a lot.

My friend's plant started doing this and she found out that the plant had mealybugs in it's center, where the leafs start. She never got them out from there, and finally the poor plant died. Hope that yours is just lacking nutrients and will soon be green again.

I have also heard that these plants need to rest part of the year in cooler temperatures to stay healthy, but i haven't grown these, so i don't know for sure.

I've grown several species of Cycas and they have a tendency to come out of winter/spring looking yellowed. The plant goes through a very active growth period in the spring and early summer with a new flush of leaves and they respond well to fertilizer at this time, before they yellow (do as I say not as I do). Cutting the yellowed leaves off after you have new green leaves is the only option I know of. Don't give up on them too soon,they are pretty tough plants.

I grow mine under lights in a basement or on a cool windowsill. I hadn't heard about chilling them further. I may try that.Good luck

Thank you for your kind Canada Day wishes. Many of us celebrate by going shopping in America. To be different this year, we went to IKEA. We bought some Norrnas and a Julius.

My Cyca did the same thing this spring. One day it was green (I think) and the next day (I think) yellow. This is a really good site with all kinds of info on Sago palms: http://www.junglemusic.net/cycadadvice/cycad-my-cycad-is-in-trouble2.htm
On mine here I checked the acidity of the soil and mine was way too acid. I added lime to it and cut off the yellowed leaves and now it has a new set of leaves about 5 inches long. They have started to grow fast now. I would definitely put it outside for the summer too.

That's exactly what happened to my sago. Ended up giving it away before I killed it. Keep us updated on what you find out... maybe it will give me the courage to try again!

Cycads and Nutrients: The Mobile nutrients are nitrogen (N), Phosphorus (P), Potassium (K), Zinc and magnesium. These nutrients are able to move themselves within the plant to go where they are needed most. Immobile nutrients are not able to move themselves within the plant. So signs of deficiency can occur say when for example: magnesium is lacking in the soil (leached out)and so the existing magnesium leaves the older leafs as it moves to the newer growth,with the older leafs now showing symptoms of choloris, green veins with yellowing between the veins. This happens with Nitrogen as well, more so because N leaches so readily from the soil.
But now a very interesting thing about the Cycads evolution. Is that is has a sybiotic relationship with a blue-green alge, just like legumes do with bactieria. The Cycad plants roots provide a place for the Blue/green alge to live and the Blue/green alge provides (N) for the cycads. If your plant is inoculted, you will see nodules on the roots. There is more to this story; but to get back to the picture of the bleached looking Cycad. IF the plant was grown indoors (even green house grown) and the currnent mature leaves matured indoors, then i suspect that exposure to the out side sun would have sun burned them. Leaves that mature in the sun adapt with thicker skin so to speak. (Cuticle)(epidermis). It is very easy to forget an indoor plant outside for a bit to long and get sunburned. Even moving plant slowy into the sun out-doors can have bad results. But since Cycad can put new growth out one to three time a year, depending on (N) availabilty and exposure. Well timeing the exposure and new growth would be helpfull. As soon as the cyads starts to grow new leave expose it to brighter and and more direct sunlight so it will adapt to direct sun. Keep in mind though that all the older plants leafs grown indoor and in the green house will most likely burn when exposed to the sun. So if you have to bring in the plants,every year, perhapps never fully expose them to the hot direct sun, just bright filter light, say 50-70% rays through patio cover? or sun screen cloth? Oh by the way, all the nutrients have thier functions, magesium is a the major nutrient for chlorophyll. excuse my spelling. It hard for me to work without the spell check :o)
Magnesuim: = Epsom Salts (magnesium sulphate) You guessed it, it has a lot of uses -for plants for us humans. The local store Walmart probably carries it. Some package brands have the rates for plants and for its other uses.

Good luck with the Cycads, I love them. If you get a chance to see the female cone,and the male cones. Male and female plants, science fiction has nothing on the female cycad flower.
Dan Rivera