I was told a couple weeks ago that some of Dad's side of the family (though not Dad himself) had recently rented a local campgrounds for a week-long family get-together. They're more scattered around the country than they used to be, which has made organizing family events more difficult, though they used to do this all the time. Some families in this situation might give up on getting together for holidays, or scale back and only try to get everyone together for Christmas or something, but this group has just moved all the major holidays so they fall within a single week, instead. So on one day, they stayed up until midnight (for New Year's Eve); on another day they trick-or-treated (Halloween), there was a big turkey dinner one night (Thanksgiving), they hunted for colored eggs one morning (Easter), they had sparklers and firecrackers (4th of July), and they exchanged presents (Christmas). I may be forgetting some holidays.

This strikes me as being a really good idea, though since I'm related to all of these people I suppose I may not be genetically objective. But still. It's fun, it's festive, you get to buy all the same holiday paraphernalia, but you can do it when everything's heavily discounted, making it thrifty, and it's less of a disruption to everybody's lives because you only have to go through it once a year. What's not to like?

None of this has anything to do with Sheba or Nina or any of that, but I thought of it because of the upcoming Independence Day holiday, and then it seemed like something you'd be interested in, so there you go.

On to Sheba news. We've been taking her outside, unleashed, since Wednesday: the in-laws brought a Chuckit! for Sheba when they visited a couple weeks ago, which even if it's just a very large plastic stick with a ball-holding pocket at one end, it lets me fling the ball way further than I would otherwise be able to, and this means Sheba gets more time to run and chase it. Which she appears to like.

The back yard is incompletely fenced, and there were concerns that maybe she would run away if we let her out without a leash, which is why we hadn't done so before this week. But then the in-laws brought the Chuckit!, which we can't really use in the house, so I just explained things to Sheba before the first time on Wednesday, how if she ran away then everything would be bad. She didn't say okay, but she licked my hand, which looked enough like comprehension and agreement that I figured it was worth a try. And it's worked fine. Not only does she not run away, she seems a lot clearer on the retrieve-and-relinquish concept outdoors than she ever was indoors, so I don't have to chase her down, wrestle her to the ground, and pry her mouth open to get the tennis ball back. (Not that I was doing that before. I'm being colorful.)

Normally, we would be due for a Nina photo, but as I've just spent a couple paragraphs on Sheba, it seems more appropriate to go with Sheba this time. We'll get Nina her photo next week. 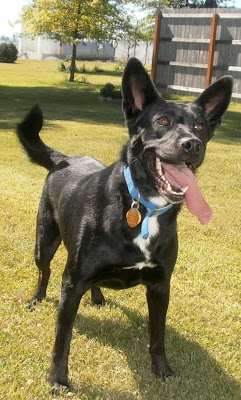 Waiting for me to throw the ball.
Posted by mr_subjunctive at 2:30 AM

Beautiful picture of Sheba. My dog hasn't a clue what to do when I throw a ball. But throw his soft toy and he will retrieve that and drop it at my feet until it is I who tire of the game.

Speaking of timing holidays to your own convenience, I have had to do that for years as I often have to work holidays. Christmas is more often than not celebrated two or so days before or after 25th December. I am lucky to have an accommodating family who appreciate that I am not in control of the rosters I am given.

Wonderful picture of Sheba; she looks so happy in it.

That's a great idea about the family. My husband's side of the family has been talking about doing something like that for the past few years, in the summer, of course. But nothing has happened yet. Everyone agrees it's a good idea, but no one has made a move to get it off the ground.