I really like this plant, and at some point during the late winter or early spring, I bought seeds of it, with the idea that I could plant them somewhere in the back yard and then enjoy them forever. That didn't happen, due to dithering about where and how a back yard garden would be constructed, which regular readers already know because they got to read some of the dithering. 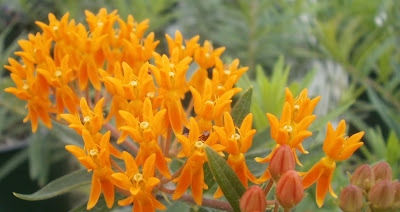 View full-size by opening in another window and see the fly (?) peeking out of the mass of flowers. It's really quite adorable, if you're the sort of person who can find flies adorable.
I'm assuming that it's probably too late, now, to do anything with the seeds, and even if it weren't, the back yard plans change frequently: I wouldn't know where to put them. Also "plans" is a charitable way of putting it: it's more like I have vague, mutually exclusive intentions about where to put certain plants. So oh well. It's not like the world is going to run out of seeds, and failing that, lots of places around here sell the grown plants. Whatever. Consider this post my announcement of intent to have one or more Asclepias tuberosas planted somewhere on property I own at some point in the future.

You won't regret it. It is a lovely plant.

Asclepias tuberosa makes me smile whenever I see it.

We also are big fans of the butterfly milkweed. Who wouldn't be?

Put them out now so the can winterize, right? And plant some A. incarnata, purpurascens, and sullivantii while you're there!

A fantastic plant for full sun, reliable and tough as nails, but a slow grower. Length of bloom season increases as the plant matures over several years. There are cultivars, or at least seed strains, in scarlet and in gold, as well as the orange of the wild type.

You could sow the seeds for stock that's already adapted to your soil, and if you plant them in several different exposures, you'll get an idea of where they'll grow best. Then when your garden plans firm up you can move them where you want them.