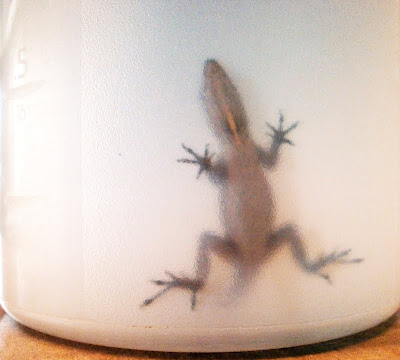 (During Nina's brief exile from the terrarium, while I cleaned it)
Sort of a futuristic look for Nina today, just because I can. It's not clear whether she's accepted the new arrangement of plants just yet, but I've already gotten an unexpected bonus from the change, in that I can now see her most of the time when I look in. For a while there, I really couldn't tell whether she was moving around or not, because whenever I looked in, it was always the same: Stromanthe covering everything, and no visible Nina unless I scanned everything carefully for twenty minutes.

We're also about to change things up again, relatively soon. I found and bought one of the small-leaved white Fittonias like I've been looking for for the terrarium, at the ex-job last Sunday:1 thinking back, I guess I was aware that they had them, but they were just cuttings on one of the back tables, it seemed like they'd been there a long time, and didn't look like they were doing all that well, so I wasn't expecting them to ever be for sale.

But last Sunday the Fittonias were out for sale, finally, and I bought one. But! Then when I brought it home, I first sprayed it with neem oil. I've been doing this with all the new acquisitions lately, just in case.2

. . . And then I realized that I'd just sprayed an insect-killing substance on a plant that I was planning to enclose with a bunch of crickets. Who are insects, whatever you may have heard, and do sometimes chew on the plants.

So I'm waiting. Google tells me that the half-life3 of the active component, azadirachtin, is roughly 2.5 to 4 days, depending on the conditions, so I'm figuring that at least 95% of it should be gone by August 1, two weeks after the first application.4 Or I'll just wait until the plant no longer smells like neem. Probably both. And then she'll have her Fittonia and maybe will no longer be emotionally scarred.

-
1 Ginny Burton had offered to send me one in the comments to last week's Sheba/Nina picture post, but this wound up not working out. Which is fine, because clearly Nina is destined to get one anyway.
2 I can't prove that it's helping, but I figure if I got a plant home and then saw bugs of some kind on it, spraying with neem is what I'd do. So it should work just as well to spray the plants if I don't see bugs on them, right? And odds are that some of the plants I've gotten recently have bugs, just by the First Law of Retail Greenhouses, so surely this must have helped me at some point or another.
3 The half-life is the amount of time it takes for half of a given substance to turn into some other substance. The half-life of the radioactive carbon isotope carbon-14, for example, is 5730 years. What this means is that if you have 100 grams of carbon-14, set it aside in a box for 5730 years, and then come back and check it again, you'll find you now have 50 grams of carbon-14 and 50 grams of nitrogen-14. Check again after another 5730 years and you'll have 25 grams of C-14 and 75 grams of N-14. And so on. With radioactivity, this is absolute: C-14 always turns to N-14 that fast, whether it's hot, cold, exposed to sunlight, or whatever. You can't make it faster; you can't make it slower. This reliability is the basis for carbon-dating.
With chemical compounds things are not always as mathematically tidy, but the basic idea still applies: if you're given 100 milligrams of a drug that has a 2-hour half-life in the body, then we'd expect only 50 milligrams to be left two hours after taking the drug, then 25 mg after four hours, 12.5 mg after six hours, and so forth.
4 The math is approximate, and it's entirely possible that the stuff breaks down a lot faster than this. It probably doesn't have to be 95% gone anyway; I'm just trying to be careful. Yes, I want the crickets to die, but only if they do so in a way that benefits Nina.
Posted by mr_subjunctive at 2:30 AM

Hmmm...I think I'd try washing the neem off with soap and water just to be safe. I don't know much about anoles, but surely coming into contact with insecticide can't be good for them.

That's a really cool photo of Nina. Looks like she's trying to find a way out.

Another option to be on the (very) safe side would be to grow out the plant and then take cuttings from the new growth that had never been in contact with any chemicals. That way you could also keep the main plant in the general collection as backup in case something goes wrong and it dies in the terrarium.

I'm with CelticRose in that I would wash it off with soap and water to be completely safe. I wouldn't want to take any chance with little Nina!

The neem wont hurt Nina. hell, i doubt it would hurt the crickets after it has dried. just spray the plant down with a little water, no worries.