Still waiting to see anything new above ground from the Selenicereus cuttings I started last spring, but the Epiphyllum cutting I received by trade in mid-May is suddenly sprouting all over. (Perhaps the Selenicereus would prefer to have an actual potting mix of some kind, instead of just the vermiculite? I'm pretty sure there are roots in there. Maybe I should do that. . . .) 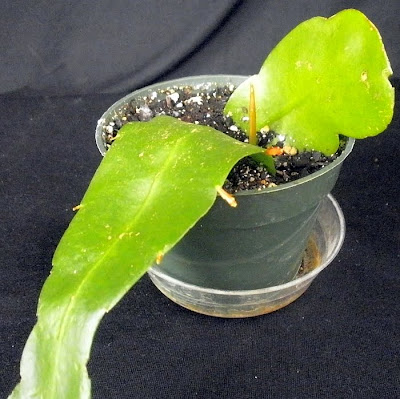 Epiphyllums are not the tidiest, most manageable plants out there, so I'm a little concerned about how big and how fast it will grow, but it's always gratifying to see plants doing stuff they're supposed to be doing. Particularly since they so often, you know, don't.

Meanwhile, I received some Ficus elastica cuttings by a different trade, at around the same time. It was originally a single long cutting, which I cut in half and stuck both parts in perlite. I've been watering approximately once a week (not very consistent about it), and they're in the basement, which is cool, but humid and bright, thanks to the artificial lights.

The original, baseline photo of the cuttings, immediately after they were put in the perlite.

These, too, have been zipping right along: a couple weeks ago I noticed I had roots growing out the bottom of the pot already. 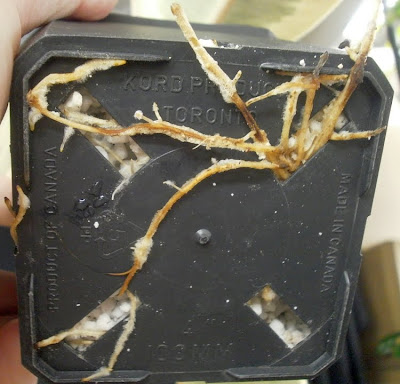 I had always sort of had the impression that it was hard to get Ficus cuttings to root, mainly because when I tried rooting them in regular potting mix at work, the majority keeled over and died within a week or two. I also tried vermiculite once, with a work-pruning of Ficus microcarpa 'Green Island' that I brought home, and that failed in a big hurry. I don't know whether that was the fault of the vermiculite, the species, the variety, the no-drainage plastic cup I put it in, the amount of time it had to sit out before I brought it home, or what. Whatever the case, perlite seems to be very effective when it comes to Ficus, and makes the whole process very easy. Go Team Perlite!

I've always rooted my ficus on plain water, and they have rooted well. Haven't had any problems with those.

I've never been able to get Ficus to root in water. Maybe you have superior water?

I've never successfully rooted a Ficus - definitely not in water - so I'm impressed. Whether that makes me easy to impress is a story for another day.

I am glad the Epiphyllum I traded you is growing! I have taken many cuttings of mine. I dry the cuttings out a few days then put them into some potting soil. The soil I use is fast draining. I have many aroids and that is what most aroids prefer.


My grandmother has a ficus. I grew my own from a cutting of hers. I started it in water. you have to change the water alot in the beginning because of the latex that bleeds from the plant. but after that plant gets going and some roots appear you can transfer them to dirt. I never had much success starting them in dirt only. they usually dropped all their leaves and withered.

We grew lots of F. benjamina and binnendijkii, and occasionally some F. triangularis, at my apprenticeship nursery - I guess they came right after the Philodendrons and Epipremnums in number. We dropped the cuttings in warm water to stop the "bleeding" (though I don't know if that's strictly necessary), dipped them in rooting powder, stuck them in whatever propagation mix we had (always peat-based, with maybe a bit of perlite), put them into the plastic-covered propagation frame for a couple of weeks - never a problem.
We made some F. elastica and lyrata, too, but those mostly by air layering (which I keep meaning to write about). If we took cuttings, we usually put them under the mist thingy (that's where my English knowledge reaches its limits - it's damn difficult find translations for certain horticultural terms) for the poinsettias, but I think it worked in the ordinary propagation frame as well. Maybe not as quickly, and with more leaf loss.

I was wondering how that Ficus was doing! Maybe I'll try rooting the other tip in pearlite.

You are definitely going to need a bigger pot for that Epi. You have great growth going though! I have one and the flowers are soooo beautiful. Some people collect these guys. I am a succulent freak as you will see if you visit!

I had a Ficus Elastica that didn't grow from the top anymore. I thought the grow point got damaged or something like that. I chopped the trunk in three and didn't do more than putting the cuttings next to the original plant. I did this end of May, the start of our growing season. Both cuttings too off :-)
Mama plant was still in the original dirt (recent purchase) so I think peat based. Now, love my pot with multiple grow points and three stalks instead of the single stalk it had when I bought it :-)
I kept the soil moist, just I would do for a well rooted Ficus elastica. That was all... amazingly easy...