I had an entirely different post planned for today, but technical difficulties prevent me from sharing it. Specifically, Firefox has been intermittently freaking out because my version of Adobe Flash Player is out of date and (paraphrasing:) going to make my computer catch fire and explode, so it sends me to a site to download the new version of Adobe Flash Player. Which I then dutifully download, giving my approval and permission where necessary.

And then AFP eats up all the memory in my computer for half an hour, does nothing, and eventually tells me that the file fails an integrity test or something, and then continues to hold all the computer's memory hostage for a few more minutes just to piss me off. After an hour in which I've been unable to do anything at all with the computer but also unable to go anywhere else, to do anything else, because who knows when AFP might let go and let me have the computer again, AFP finally relinquishes control and I can use my computer more or less normally again, except that I'm now an hour behind where I wanted to be, and in my hurry to catch back up, I do stupid things like accidentally double-clicking on something, opening 27 windows of Irfanview, and then slow myself down even more.

Since all of the prior AFP download attempts have failed (there have been about five or six, at random intervals over the last few weeks, and they all go like this), what this means is that at some point a few days or weeks from now, Firefox is going to be all like ZOMG YOUR GOING TO DIE UNLESS U DOWNLOAD THE LATEST VERSION OF ADOBE FLASH PLAYER!!!!1!11!11!!, and then we'll go through this whole thing again, and nothing will happen.

There should be more hollyhock pictures than just these two, but there was some problem I no longer remember with the other ones. (These are a few weeks old, from before it got too hot to walk with Sheba.) So: you'll look at the hollyhock pictures, and you'll like them. 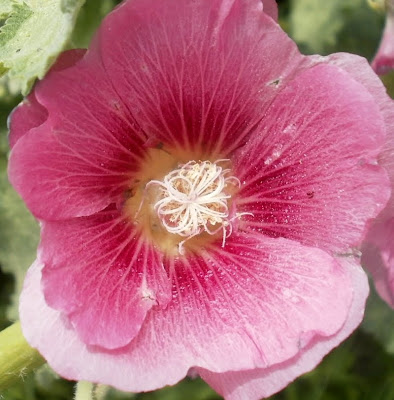 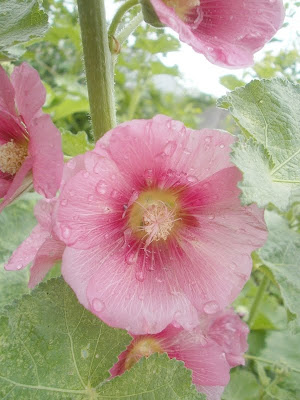 Like them? I love them! Especially the second one.

Ooh, sorry about your computer problems. That sucks! But I'm with Ginny, I like the photos.

I used to be fascinated by hollyhocks. Then I visited Amsterdam where they grow out of cracks in the sidewalk like common weeds and the magic was destroyed.

I love hollyhocks - I took some wonderful photos of some in New Mexico a few weeks ago that were almost black.

And I really hate when Flash makes my computer catch fire. That's why I try to avoid sites that use Flash.

This post reminds me of some pictures I took of my gran's garden last year (last year? Or the year before? Huh?), many of which were of hollyhocks.
When I showed them to her, she almost didn't believe they were from her garden - "I didn't know I had such beautiful flowers!"

Downloading things can be a pain - I tend to put it off as long as I possibly can.

Have you tried going directly to Adobe's site to do the download rather than following the link Firefox gives you? It's possible that you could be experiencing a malware attack disguising itself as an official Firefox message -- Adobe updates should be fast. Also, try updating to the latest version of Firefox and see if that helps -- my Firefox just automatically updated itself today, so there's a new version out.

Good luck with the computer, and the hollyhocks are lovely. :)

Firefox updating itself was actually what set off this latest round; when the "What's New" page came up, the freak-out message about Adobe was part of it.

And, yes. Your experience echoes mine with the firefox/adobe screaming. I finally got adobe to load this week, I'm hoping that settles it for a while.

What a freakin headache!

There was a page on how to download with Firefox when I just mended my Mum's Flash plug-in yesterday. Eventually it started working.