At the beginning of the summer, I planted five of my Salvia elegans plants in the back yard, and four of them are doing very nicely. (No flowers yet, but apparently it's early for flowers. So I will be patient.)

The fifth plant, though, has had a patch of trouble lately, beginning with the husband "bumping" it with the lawnmower. I had some trouble understanding this when first told about it: we have a border around it that shouldn't be lawnmower-permeable. It was a heavily-improvised, non-professional border, granted, but it'd be enough to keep a person from going over it with a mower to bump the base of the plant. When questioned further, the husband said that it wasn't so much a bump, per se: a couple branches of the plant caught on the mower or something as he was going by, because it had grown over the border, and they got pulled hard enough to break off. 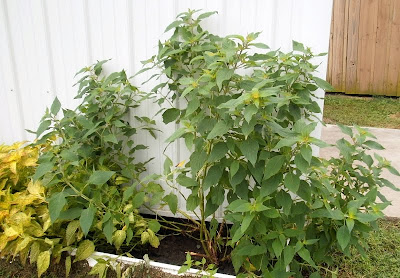 No big deal really. It's a big plant; you'd think it could lose a couple of branches here and there. It didn't look great, but at this point I could still tell myself well, it's a fast grower, though: maybe it'll fill in a little before it flowers.

But what actually happened was that: a few branches were broken, but didn't show the damage until a day or two later, so those came off. And then we had a few really windy/stormy days, which snapped away a few more, and then after that, one day playing fetch with Sheba in the back yard, an errant tennis ball landed a few inches from the poor plant, and Sheba exploded what was left of the plant while retrieving the ball.

At one time, there were two matching plants on either end of the garden shed. Now, well, see for yourself:

(That's Solenostemon scutellarioides 'Glennis' in the middle.)
Not so matchy anymore.

This was all quite the learning experience for me, since I really had no idea that pineapple sage was so brittle, or that the branches depended so much on one another to serve as windblocks. I mean, we've had bigger storms this summer; this plant had dealt with wind repeatedly before this. It's just that apparently once they reach a certain size, the stems get both really brittle and really good at catching the wind.

And, you know, catching dogs.

It's probably good we don't have a lot of airplanes flying overhead here.

Nothing to be done about it at this point. It's basically toast. I was going to cut it down and turn it into a bunch of cuttings to overwinter for next year, but on Tuesday, I found that all the big Salvias in the yard, including the "bumped" one, also have whitefly (another kind of exploding that pineapple sage can do, it turns out, is producing a thick swarm of whiteflies when poked with a stick), so that's probably not happening. I have one tiny cutting that's rooting in water in the living room, which I took a while ago and looks like it will be the ancestor of next year's plants, because it's the only one I can be reasonably sure is clean.

Still, as long as the plants all burst into glorious bloom when they're supposed to (and they are beginning to bud, so this should happen soon), and we don't have any further "bumping" incidents, and I don't wind up bringing any whitefly inside with me, it'll all be worth it. Right?

In designing a border, there are a couple of rules of thumb that help prevent this sort of trouble. One is to make the width at least twice the height of the tallest plant you intend to grow. The other is to make the width a minimum of three feet. Bumping incidents aside, narrow borders give a stingy effect in the landscape.

For the edging, you really don't need anything more than a clean lawn edge made twice yearly with a half-moon edging tool. Around here, people often emphasize a lawn edge with rectangular granite cobbles, but in your part of the country that's probably an expensive solution.

Maybe the white flies came from the Solenostemon -- you mentioned in its profile that it was a white fly magnet.

Have you ever considered putting the correct pronunciation next to the Latin name of a plant? Fear of mispronunciation may be one reason why most people (e.g. me) don't use the Latin names. Of course, laziness is the biggest culprit (me, again).

Ohhh, a snowstorm in the backyard!
In my chronic inability to take anything serious, that was the way I always treated whitefly infestations at work - "ohhh, a snowstorm!"
But, yeah, not so funny when it happens at home.

You had a zillion baby Salvias back in February. What happened to them all?

Whiteflies are a bitch. Our neighbor's nasty Myoporum tree had them a couple years ago. Disgusting. Our solution was to hack at all parts of the tree on our side of the fence. Preferably when the neighbor's are at their summer home north of SF. Hope you still get some gorgeous blooms!

Sold, traded, planted in the yard, or dead due to chronic underwatering. The very back of the yard has about 30 planted in the soil. I planted them too late and they don't look like much of anything, but that's where a lot of them went. At least they didn't die of underwatering, which is where they were headed if I hadn't planted them.

Also, I've thought about putting a pronunciation in the profiles, but, ironically, the main reason I don't is laziness. It's just one more thing to do, and the profiles take long enough as it is. I think they're important to learn, or at least try to learn, but I don't care that much whether people pronounce them "correctly." I care if people are able to communicate and understand one another; I don't care that everybody adheres to a specific pronunciation.

My attitude to the pronunciation is to think with a silly Italian accent then take a good run-up.