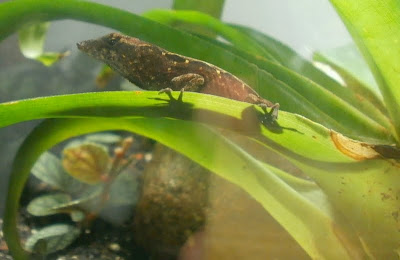 Fall Hiatus is almost upon us, and I'm hoping to post the Aloe vera profile before that happens, ideally on Sunday. (UPDATE: Done!) So minimal commentary today. Neither Nina nor Sheba had a very exciting week, though it's looking like Nina will be getting a new place fairly soon.

The fish in the basement aquarium aren't doing well; I don't know why, but I suspect it probably has something to do with the changes to the basement since the flood a month and a half ago. I'm not going to start treating them worse in the hopes that they'll die, but sooner or later they will anyway, and when they're all gone, I'm going to clean out the tank and give it to Nina, rather than replace the fish. It's not a huge step up, but it'll be a little roomier in every direction, and I can maybe use some taller plants. The Vriesea she's sitting on in the photo is all she has to climb right now, and it's getting a little ratty. It'd be nice to give her something a little taller. Don't know what it would be yet, but it'll have to be able to roll with erratic watering and not get too tall too quickly, which limits the options.

Its still so unusual for me to see a brown anole as a pet, since I see about 10 of the invasive critters on the way to my car every morning. I suppose I did have a green anole myself as a kid when I lived in Kansas... have you ever kept one of those?

Good luck (or not) with the fish! Mine got tuberculosis. That's right, the kind that humans can catch and die from.

So I gave them all a painless death with clove oil and alcohol (at least, all the online sources said it was painless...) and threw them away. We have enough fish diseases in our water system without people flushing dead fish down the toilet...

No, Nina's my first lizard. And I wouldn't have her had she not stowed away in a tropical plant shipment from Florida a year and a half ago.

I did have box turtles as a kid, though, for quite a few years.

Well, clove oil is supposed to contain a mild anaesthetic (eugenol, which is, or at least was, used in dentistry for the purpose). So maybe.

Not sure if I'm hoping for them to keep going or die quickly; I do like the catfish, and they actually laid eggs a number of times when I was in Iowa City (softer water there, which they like) and I managed to grow a few to adulthood. The algae eater I'm less attached to, but I wouldn't mind moving the catfish to a goldfish bowl or something. We'll see what happens, I guess.