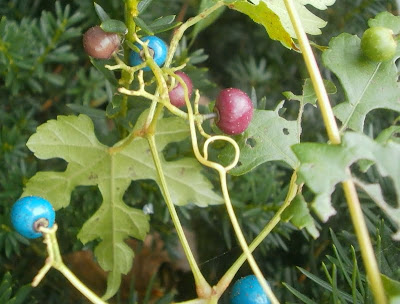 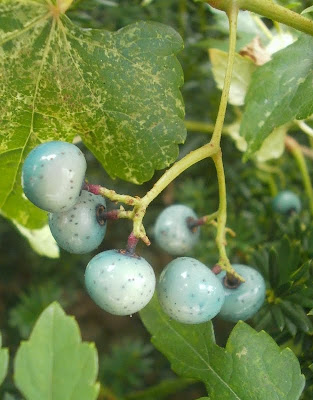 But come on. These berries are damned pretty. So many colors! 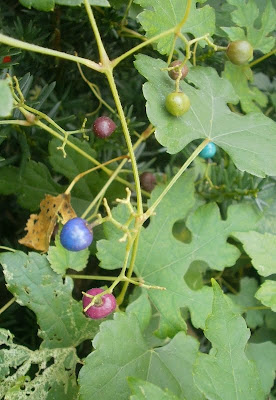 I'd noticed the plant before, but a few days ago was the first time I noticed that it wasn't the same thing as grapevines. Why I ever thought it was a Vitis in the first place, I don't know -- the leaf shapes are hardly similar -- but you know how it is. You pass a plant eight thousand times, notice nothing about it, and then on the eight thousand and first you're all like, hey, what's a grapevine doing with oak-shaped leaves like this? 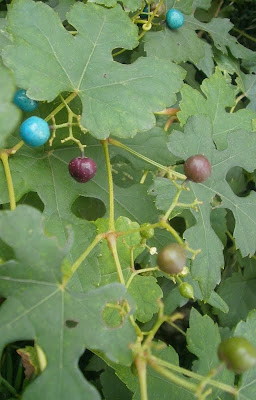 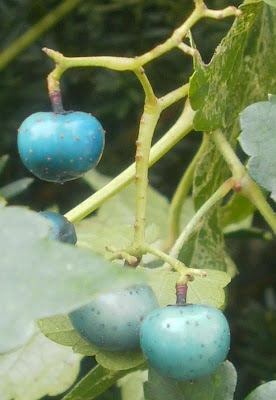 Anyway. The obvious tip-off that it wasn't a grape? The berries. Teal/turquoise is a rare color outdoors here, and it jumps out at me when I see it. 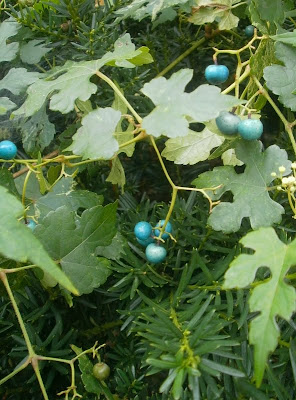 It makes me very sad that Ampelopsis tends to spread out of control and take over ecosystems and all that. It apparently also attracts Japanese beetles, which isn't endearing either. Although the leaf shape is interesting, it's not that pretty when not fruiting, either. But. Slightly iridescent fruits in white, green, turquoise, blue, brown, and violet -- all at the same time -- is a pretty cool trick. 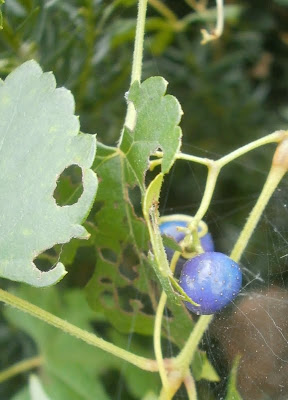 I share your pain. I have a really hard time pulling it out of my yard. I keep temporizing: "Surely just one or two of these could stay. I'll keep an eye on them and make sure they don't spread. I'll put a net over them so the birds don't get to the berries." It's just so beautiful.

Do you think it would work as a houseplant in a sunny window? Has anyone ever tried that?

I agree that the berries are cool, and turquoise is rare among plants, hardy or not. If you want to plant something else that's hardy with turquoise fruit---but isn't invasive--- you might consider Clerodendron trichotomum. It should be hardy for you, and has a lot of other virtues, too. It's aggressive but not invasive.

There's a family resemblance among all the members of the grape family, so it doesn't surprise me that an Ampelopsis could be taken for a Cissus (grape ivy) or a Vitis (grape) or Parthenocissus (Boston ivy or Virginia creeper) if you only see it out of the corner of your eye in passing. But grape ivy is semitropical.

What pretty berries! That turquoise is an unusual color to see on a plant.

I don't know whether that could work or not. It's from temperate areas of China (actually the northeast corner), roughly at the same latitude as Seattle, Winnipeg, and France, so it would likely be adapted so as to need a cold spell in the winter. As far as I was able to find, it doesn't seem to be an invasive threat in the U.S. south of North Carolina, so prolonged indoor temperatures might be a problem. Also a couple sources noted that it has a long and deep taproot, which might also not work well in a container.

The reason why I phrased it the way I did in the post is that I was going to say turquoise was unusual, but then I spent a lot of my day yesterday repotting succulents. All kinds of succulents (Agave, Aloe, Sedum, Echeveria, plus some cacti like Myrtillocactus geometrizans) have leaves (/ stems) which are turquoise, at least to a first approximation, so I had to specify outdoors and here.

Edited the post slightly to be clearer that I meant I thought it was Vitis, not Cissus.

They are pretty - I've never heard of this. I suspect it might not like our long dry spells here. But I do like the colors anyway.

Yes, the berries are pretty, look just like some coated candies haha

*blinks*
That is a freaky colour!

Ampelopsis brevipedunculata var. maximowiczii* 'Elegans' is listed in all my books as a houseplant - needs cool temperatures (below 15°C, you do the maths if you think in Fahrenheit) in winter though.
___________
* how I hate those Russian names! Impossible to spell!

I've never seen Ampelopsis in a houseplant book; it's interesting that yours include it. I wonder why the difference.

I might translate it in my posts, if it comes up. In comments, I demand the right to be lazy!

I always find it interesting that for most plants, we do even have the same varieties on both sides of the pond - and then there are some, like Pedilanthus or Homalomena, that I've never seen or heard of (except here, of course. Oh, and one of my houseplant books - the one that could double as a murder weapon, it's so big and heavy - lists them.)

I have never seen these at home in Michigan or here in Massachusetts, though if they are invasive in Iowa it is probably a good thing that I have not seen them in either state.

I could understand skipping Homalomena, since it's a relatively new introduction, but I'm surprised there's no Pedilanthus over there, 'cause it's old as dirt and not hard to grow.

From what I read, it sounds like they're mostly a problem in New England, so they should be somewhere in Massachusetts. This is the time of year when they're most noticeable, so keep your eyes open.

It's described in one of my garden books, but no pictures, and says nothing about invasiveness. I didn't realize how cool the fruit and leaves are. I'd plant it.

That blue is so wild - it reminded me of another blue fruit, Decaisnea fargesii. I know it's not the same, and can't quite call them pretty, but they are blue...

The fruits are edible but not very palatable according to the Plants for a Future database. I wonder what colour the wine would be?