I've had this plant for over four years now, moving it up from a 3-inch pot to a 4-inch and now a 6-inch, and it's behaved itself admirably for most of that time. This spring, though, it started to do this: 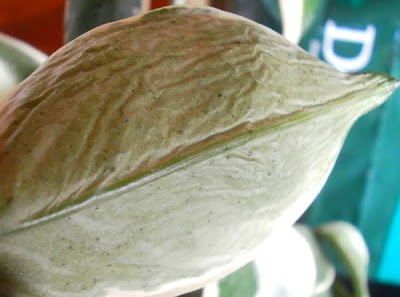 The leaves wrinkle and then eventually turn yellow and fall off. Usually this is a stem-by-stem thing: one stem will wrinkle and yellow and die, and then another one will go a little later. Lately, though, they're all going at once, and I don't know what to do about it.

It's in the plant room, between two H. carnosa 'Chelsea' plants which are both doing fine, and there are a couple other H. carnosa varieties elsewhere in the room that are also fine; whatever the issue is, it's specific to this plant. 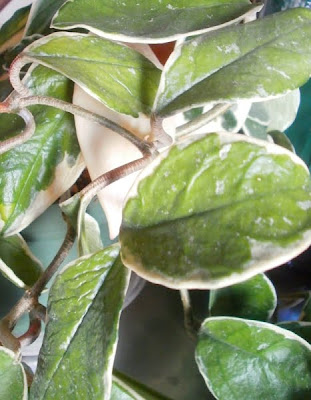 I topdressed the plant a little after this started happening, which didn't help, but otherwise haven't messed with it. It's been a while since it was repotted, though 1) when this started happening in the spring, I checked the roots and they seemed fine, and 2) everybody says Hoyas like to be rootbound anyway.

With most succulent-ish plants like this, wrinkling leaves would mean the plant's too dry, but it's not getting any drier between waterings than the 'Chelseas' next to it, and when I tried watering more often for a while during the summer, the leaves didn't wrinkle, but they still turned yellow and dropped.

So I'm hoping that someone out there has seen this before and knows how to fix it. Help.

I don't know the cause of the problem of your Hoya. I've 4 Hoyas and 3 are in hydroculture. Beside pest the only problem I've is I put them at a place that is too cool. Hoya needs 'warm feet'. That means It is better to put the pot at a higher place instead of on the floor.

Some fungus disease in the roots would be my guess. Is the soil porous and permeable? Have you been over watering?

I would take some cuttings and make them a better soil mix. I use 1/3 dirt, 1/3 vermiculite and 1/3 leca (light expanded clay).

The exact same thing has been happening to my beloved jade and I'm at a loss as to what to do with it! Hope somebody can come up with a good solution.

I had a similar problem when the roots were damaged, probably from over watering. The plant was unable to take up water and started to shrivel.

Maybe it just doesn't like you. Haha, I'm kidding. You're very likeable!

Hy
I think the problem is on the roots. I don't know what the problem is, but I will try to put the hole plant in a transparent plastic bag. This will keep the humidity and maybe will get the plant healthier.
good luck

I agree with Aralia. It smacks of a fungal infection or blight of some very odd sort if nothing else is being affected. It definitely reminds me of what happened to Piper betle.

My best treatment guess would be to repot with a significant amount of sulfur and keep in a drier place; maybe watering with a clove/chamomile decoction. I know it sounds super granola-y, but cloves really do pack a punch on fungi.

Secondary - it has a magnesium deficiency or some trace mineral shortage. Is there any new growth? If so, do the leaves look fine?

I've been watering the same way the whole time I've had the plant, save for a short period this spring and/or summer when I watered more often because I thought the wrinkling leaves meant that it was too dry. But of course that was after the problem had already started.

Soil breakdown is possible; I don't know when it was last repotted, but I'm pretty sure it was in this 6-inch pot when we moved, a little over a year ago. I top-dressed between then and now, but not very much.

There hasn't been any new growth in quite a while. I don't know exactly when it stopped, but I'm pretty sure that it hasn't produced any new leaves while this has all been going on.

I think I'm inclined to try to start over with cuttings, rather than trying to preserve the plant as-is.

I have no idea what the growth habits are, but if there's been zero new growth, it sounds like it's a terminal situation. I'm a pessimist like that, though.

Cuttings seem wise, though I would still pre-treat using multiple antifungals and quarantine.

I guess I spoke too soon; when I went to check the plant for watering today, I saw that it did have one spot of new growth on it, but I cut it back anyway and used the pieces to start new plants from cuttings. Whatever will be, will be. It's not like it's hard to find Hoya carnosas to buy.

It's occurred to me since I left that comment that one of my other Hoya carnosas, that I threw away a long time ago, did basically this same thing. I threw it out rather than try to salvage it; don't remember why. But that suggests that maybe there's something I'm doing that's different from how everybody else cares for Hoyas. Not sure what it would be, though. Maybe I'm letting them dry out too long between waterings?

It looks to me like the plant does need more water. If it is tight in the pot, it takes a lot of water in the growing season. I keep mine moist then. When it is resting, I water less, but try to give it enough to keep it from wilting.

Paul, would your advice about the repotting and clove decoction apply to a jade plant also? If so, how do I make a decoction??

I had some horrible thing kill two of my hoyas rapidly after repotting with miracle grow moisture control potting soil. I was furious...but still do not know what's killing my hoyas. Its like it sucks up the moisture internally and it rots and then dries out...m

To other commenter that used miracle gro moisture control - good to know! I used the same soil to supplement a hoya, with the same result. It's good to know that the soil is likely at fault... and I will never use it again!

I have had my hoya 10 years never had a problem with her, we moved and I have been fight to keep her alive ever since...she was soo big and beautiful and now not so much😫...and yes the moisture control miracle grow is the worst product ever!!

We’re you able to rescue your Hoya plant? Mine is doing something similar with the seemingly thin leaves and slight curling on the edges. Strange thing is she has 17 blooms on her as well, so I really didn’t notice a problem with the leaves until I was picking up spent flowers from the floor around her.

Well, it's been a while so I don't remember exactly what happened, but I'm pretty sure I never figured out how to reverse the decline. My advice would be to take some cuttings now, as insurance against losing the plant entirely.

I was able to save my Hoya plant. Nothing magical, but I did start using the Espoma organic indoor houseplant food for periodic feeding. The leaves are no longer curled on the edges and I have noticed some new growth as well.