Nina went through a spell a couple months ago, not long after the Pellionia pulchra started climbing up the side of the terrarium, where she would hide underneath it on the wall, sometimes for long periods. Like her more recent goth phase, I suppose I'll never understand what was going on, but it seems to be over. 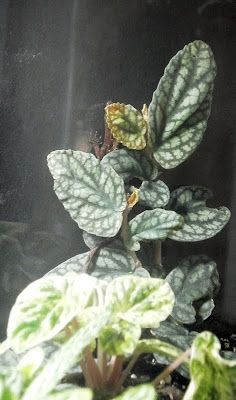 Sheba, meanwhile, has been meeting the boxelder bugs (Boisea trivittata), on the rare occasion that one makes its way indoors. (Maybe it's just earlier in the season than it feels, but it seems like we should have way more of them in the house than I've seen so far. I'm not complaining; just puzzled.) She didn't appear to understand quite what the bug was for, but she diligently followed it around anyway, pawing at it occasionally to see what it would do. 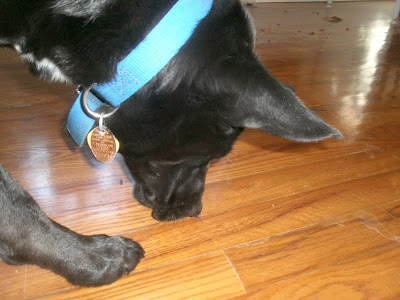 I occasionally realize that I give Sheba more credit for intelligence than she deserves. I mean, for a dog, as far as I can tell, she's plenty smart, but I guess I've read too many stories about the dog that jumped into the river to rescue the baby, or woke the family up when the smoke detector didn't work, or ran in the house to tell everybody that the robbers were hiding in the old barn and then ran back out again to disable the transmission on the robbers' van and call 911. 'Cause when she freaks out over something, I assume that there's something there to be freaked out about, and then I get freaked out, but so far it's always turned out to be nothing. She almost never barks, but when she does, it's usually because one of the neighbors has slammed a car door. Occasionally she growls really intensely at nothing in particular; the only time we've been able to figure out what it was, it turned out to be the husband's shadow, moving around on a shelf full of plants. On one memorable occasion, she barked and growled like crazy in the plant room, long enough that it sounded serious, so I went to see what was the matter and found -- the husband, weeding, in the back yard. Why she couldn't tell it was him, I have no idea.

The point of bringing this up is that Sheba freaked out at this Halloween decoration on Monday: 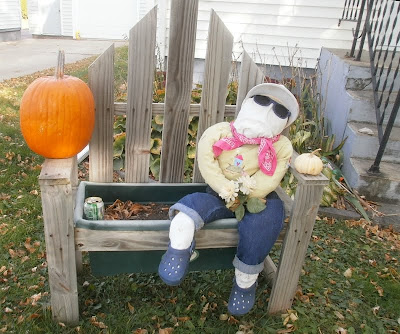 She was jumping around it (sort of trying to charge it and run away from it simultaneously), barking, growling -- basically losing her mind over it. I had to drag her away from the thing. On Friday, the walk took us by the same house, and she was very interested in it again, but she didn't bark at it. Maybe she was just surprised to see it for the first time?

I don't know. Whatever might be going on in her head, though, it was a reminder that she is, after all, only a dog, and less than two years old. Whatever canine powers of perception and intuition she may have, she's not magic. More like a nearly silent toddler with really good hearing and strange obsessions with houseflies, squirrels, and tennis balls.

This is only a guess, but since I've had dogs fixate on carpenter ants and earwigs - 100 pounds of dog diligently following the earwig, nose to carpet - I have assumed that these things smell. Whatever it is, no, they don't outgrow it. But at least it seems to amuse them and does no harm (not like deciding to catch the pretty black and white critter and drag it in the dog door, ooooooh no!)

A brief, yet offtopic, question!

Is there a chance for autumnal transmitted light pictures?

Also, Nina is awesome in her macabre exhibition of self-identity. :D

That was too funny. Sounds like Sheba can be very entertaining at times.

I don't know if you've seen the Pixar film Up, and if you haven't, I'm not sure I can recommend it as a whole. But just imagine these two scenes of dog-squirrel fixation (http://www.youtube.com/watch?v=bBWrMQVsuak) as happening in the midst of a large amount of non-interrupted and non-squirrel-relevant conversation. I thought it absolutely hilarious.

Yes and no. There are pictures, but not a lot of them (outdoor autumn leaf pictures are problematic because some leaves curl as they dry, or crack, or spot, so the number of suitable leaves is smaller than you'd think), and I post the leaf photos in the order I get them, which means that right now we're ready for the pictures I was taking last spring. I may have to do an all-transmitted-light week sometime, just to get through some of the backlog.

Cute pic of Sheba checking out the bug. :)

That last line nails it.

When they get older and have a bit more confidence, it's like the toddler one minute, sulking teenager the next, back to toddler.

She still may dramatically save you, from something more than shadows. Lots of time ahead of you.

Maybe the strange little scarecrow freaked her out because her canine vision told her small human, but her canine olfactory sense said WTF, and she challenged it to declare itself. Very brave of her.

An all-transmitted light week would be awesome on many levels!