I don't know whether houseplant books still mention it, but a fair number of the books I have talk about propagating Dieffenbachias from cane sections.1 One is supposed to take a plant with a long, leafless stem, cut it into pieces three or four inches long, and lay them on their sides in moist soil. Eventually, new growing tips will emerge from the nodes of the cane, and the piece of stem will root, and then at some point you wind up with a new plant. 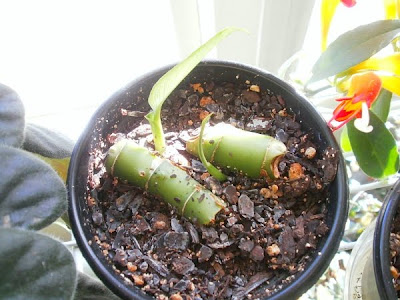 I've tried this a number of times now, under different conditions, and sometimes it's worked, and sometimes it hasn't. The first time, which worked, I laid pieces of stem (I think from the cultivar 'Sparkles,' though I've never been able to pin down the variety for certain) down on regular potting mix, and kept it all in the mini-greenhouse,2 and most of the pieces wound up sprouting new plants.

The second time, which didn't work, I did the same thing but used shorter pieces, only one or two nodes long, of I think 'Tropic Snow.' All of those rotted immediately.

There was also an attempt to root a decent-sized NOID cane at work, that WCW brought in from her other job, which rotted and died pretty quickly too.

Presently, I'm trying a different, and much more time-consuming, approach, which involves rooting stems in water first, then cutting off and planting the rooted portion on its side in soil. It feels stupid and wasteful, because the stems will produce roots all the way around the stem, and then when you plant the stem, half of them wind up on top, where they dry out and die. But even so, it works, and if the original cutting is long enough, you can repeat the process after you've cut off the rooted part. 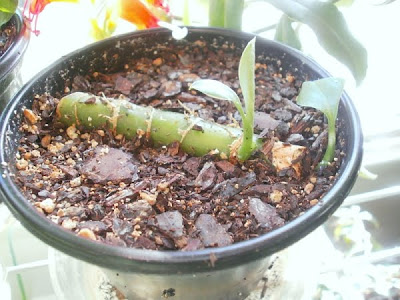 It's a long and roundabout process, so it's no wonder that the growers don't use it in mass production. And also you don't always wind up with a pretty plant when it's over; they tend to turn out with thin stems, and it's nearly impossible to get a Dieffenbachia to sucker indoors.3 In this particular case, the plants I'm propagating were spindly, unattractive plants to begin with, so I'm not losing anything by turning them into additional spindly, unattractive plants. And it's a much more accessible method than tissue culture.

1 The Griffith growers' guide mentions stem-section cuttings as a means of propagating Dieffenbachia, but then goes on to say that nobody in the industry actually propagates them that way, that everybody uses tip cuttings or tissue culture instead. The stem-section method, he says, is "better suited to hobbyists and collectors than commercial growers."
2 The mini-greenhouse has been out of service since we moved to the house, because the plastic got ripped up during the move, and it was pretty flimsy plastic in the first place, and it would be falling apart from age even if it hadn't been ripped up. Instead of that, I now mostly use plastic clamshell-type containers (e.g.). If the plant in question is short enough, those work just fine, and for taller plants, I have plastic containers from pre-packaged salad mixes.
3 I've managed it, but it felt like a cheat -- I buried the stems deeper. It won't give you a big fluffy mass of suckers around the plant's base, and sometimes you won't wind up with any new suckers at all, but occasionally planting deeper will rouse the plant to throw out a new stem, and so far doing this hasn't killed any plants. It also sometimes happens that a Dieffenbachia that gets cut back will replace the one growing tip you cut off with two growing tips, though that's not a good way to get a thick, fluffy plant either. When it comes to the smaller Dieffenbachias, my personal experience is that it's never going to be as fluffy and full as it was when you bought it, and it's best to accept that early on. The larger varieties are usually only one or two stems planted together to begin with, so suckering isn't really an issue, and I personally find the larger varieties like 'Tropic Rain' and 'Tropic Snow' easier to grow, so I prefer them on both counts.
Posted by mr_subjunctive at 2:30 AM

Thanks for that, mine rotted too.

My question is that if you've got a section of stem that you've rooted in water, with roots all the way around the circumference, why don't you just try placing the stem section in the soil vertically, as if it were a cutting with leaves? It should still put up new growth. I've rooted bare Aglaonema stems that way. I would still keep it in a moist environment, to keep the stem from drying out before it produces.

The thinking was that I'd have a better chance of getting multiple sprouts from a rooted horizontal cutting than a rooted vertical one. In the case of 'Camouflage' (top photo), that didn't work, but for 'Pacific Rim' (bottom) it did.

I've water-rooted Dieffenbachias and then planted them before, but usually my experience has been that they sort of limp along for a long time. By the time they get established, they're already so tall they need to be cut back again. The hope was that this way, I'd start out with a smaller plant, that would have time to mature gradually. Which sort of worked.

I've water-rooted Aglaonemas before like you describe, but I have had very divergent results, depending on the variety. 'Maria' rooted pretty easily and transferred to soil without much difficulty; with 'Stars,' about 1/4 of the cuttings died before they water-rooted, and then I lost 2/3 of what remained when I tried to transfer them to soil.

What is the orange/yellow flower in the background?

Dieffenbachia is very moisture sensetive. For this reason the cutting should NOT be kept to moist. The cutting only needs to be one node long. lay the cutting horizontaly with the "bellybutton" or node at the top (polarity plays a big role in any type of cutting). It also helps to use a rooting hormone on the wounds 1000ppm will work fine. Also making an additional wound on the underside of the cutting will help. Only water when the soil becomes completely dry, if not the cutting will easily rot. Also, rootzone heat works exceptionally well with this species.

My plant was a gift to my parent's for their wedding in 1946. I first received a cutting in 1990 and have been propagating it ever since. If you use the cane method make sure it is covered with soil/perlite to 1-2 inches. This method has only worked for me in the Spring and Summer. My plant will grow to 17ft and is not full like some of the newer hybrids, so I top it, dip the end in growth hormone and stick it back in the same pot with the parent plant. This method works year-round.

How long did it take for a few leaves to emerge like in your pics? Weeks? Months? I'm setting up a science project for my kids and hoping that we will see action in a month (science fair due date). TIA!

I don't remember how long it took; that was a long time ago, and I didn't write it down in my journal. I wouldn't bet on seeing anything that looked like a leaf within a month, though. I couldn't think of any plants that I would bet on within that time frame, either, though you can do the same thing with stems/canes from Aglaonema, Cordyline fruticosa, most Dracaena, and Yucca guatemalensis. Possibly a philodendron? Less dramatic, but the principle is the same: cut up a stem, set the stem on a moist rooting medium (ideally vermiculite), keep in warm enclosed container with bright light but no direct sun. I wouldn't bet on full leaves there either, but it seems like maybe your best bet if something has to happen within a month.

Once the plant sprouts and grows leaves should the exposed original cutting be moved further into the soil?

Well, it's been a long time since I did this, so I'm not sure what I actually did, but -- I don't think so. I'm not sure how much it would hurt if you did, but I'm pretty certain it's not mandatory.