Goodness. It really is going to be like last year, when all kinds of random plants started blooming at once. I noticed buds for this plant maybe three weeks ago, and saw the flowers open last week.

H. lacunosa 'Royal Flush' has leaves that are similar in size to the species, but they're flatter -- they don't have depressions between the main veins like the species does -- and heavily speckled with gray/silver. Also in bright light, new growth of 'Royal Flush' is dark purple: the species will bleach out to a yellow-green in strong light. 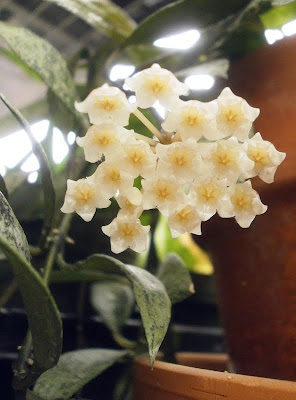 In certain conditions, the flowers will be tinged with pink; you can see a picture of that at this davesgarden.com page. (I'd tell you if I knew what the conditions were, but I don't. Sorry.) The fragrance is basically the same as for the species: that flower-cooler smell, which is very faint for most of the day and then becomes very strong at night.

I got this plant in a trade earlier in the summer, and it bloomed once almost immediately then, but then it was quiet for several months. All of a sudden, it's decided to go again, and I'm not sure why. With the species, giving it a lot of light, to the point where the leaves yellowed, triggered blooming, and then the plant kept on blooming for months. That's not what happened here: it hasn't been moved and I haven't done anything differently. Plus, this plant is in the basement, which is probably the least variable of the various places we have plants, though a couple times during the basement being torn down and rebuilt, the husband has had windows open down there, even though it's cold out. The plant's close enough to the floor that a bit of cold shock might explain why it's flowering again.

I don't know. I'm just happy it is. I enjoy the smell tremendously.

I am so glad you're enjoying the Royal Flush! Mine formed blooms when I brought it inside a few weeks ago. I have found that it is happiest overall if I keep it more evenly moist than my other hoyas, and most of my other houseplants. I'm not sure if that has anything to do with the blooming or not.

I bought a Hoya in bloom a few months ago. I had wanted one, it was cheap, and it was blooming. Not sure what kind, but it didn't much matter; I loved the smell. I brought it home and hung it in the window. It continued to smell fantastic. After a day or two, however, my perception of it began to change, as I got accustomed to the aroma. I noticed how incongruous the obscenely "nice" smell was to the rest of my house's natural smells (books on the shelf, the kitchen, etc). It began to smell like a coverup, like one of those plugin contraptions. Which led me to thinking about other ways we try to cover up odors, and it hit me exactly what the smell profile is like: a urinal cake. Very intensely flowery smelling, on top of something you can barely smell but don't want to. So now I'm sort of dreading when it reblooms. At least the first day or so is really nice. Sigh.

Wow. That's a terrible mental association to make. Though I know what you mean; I sort of felt that way about the smell of the Crassula muscosa, way back when. Were the flowers pretty to look at, at least?

Oh, of course they looked nice, a thick flush of those funny succulent petals. They make me think of candy for some reason, like those star-shaped confetti you can buy for cakes.