Plans for Nina's new place, mentioned in last week's SMSA/ONP, are coming together much more slowly than I'd hoped.

I have purchased a couple plants specifically for Nina, things I would never have bought without a terrarium to put them in. I'm not going to tell you what they are, because that's Monday's post, but I'm sort of pleased (maybe) about trying a couple new things. Planting them is a ways in the future, still.

The aquarium was dirty when we got it (mostly mineral deposits in rings around the tank; it might have been used for salt-water fish, or it might have just been used somewhere with really hard water), and some of the spots don't come off with just soap and water. There's also a bit of tape residue involved, it looks like. I intend to try cleaning it with vinegar when I get a chance, and maybe acetone or rubbing alcohol if the vinegar doesn't work, but I've been too busy watering, writing, shopping, or lying around with a headache (Tuesday was a bad day) to get to that yet. I also can't plant right away because I haven't chosen all the plants -- I still need at least two more, maybe three, and I don't know what they're going to be, so I don't know where I want to put the ones I have already. 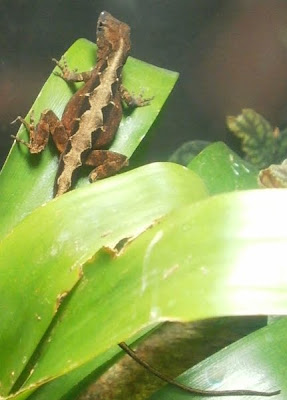 Even once we have the plants in place, Nina can't move in for a while: lid and lights were not included, and we have to figure out what we want to do for those. I asked at the pet shop where we get Nina's crickets, and it looks like a new lid is roughly $20-25, which seems excessive for something that's basically just a wire screen with a hinge in it. And then a light fixture, plus special UV-producing bulbs, adds however much more. So we're at least going to shop around for a little while, if not try to improvise one or both items.

Which all means that Nina's stuck with her ratty old cricket-chewed Vriesea for a bit longer. But maybe I can make up for not getting her anything last Christmas by presenting her with a new apartment this Christmas.

Knowing her, she'll focus on the lack of a formal dining area and stainless steel cricket warmer, and complain anyway. But we'll see.

Fabulous shot of Nina! What a handsome pattern down her back. She's looking pleasingly plump. She must have been gorging on crickets, since pregnancy is out of the question.

Try CLR (http://www.jelmar.com/CLRbath.htm) I lived in an area with super hard water and also had an aquarium that collected mineral deposits like crazy. This stuff works pretty well. You'll obviously want to wash/rinse the tank excessively when you're done because I think it's some pretty potent chemicals, (oh, and wear gloves) but I use this in my sink and on the outside of the tank all the time. Good luck!

I'm sure a cover is easy to build, and you can probably build a much better one from bits and bops at the hardware store. If you have welding equipment or know someone who does, zing! I've also seen terrarium equipment at local animal shelter yard sales and such. Very cheaply priced.

Well, pregnancy is out of the question, true. The photo is oldish (July?), so heavy cricket-consumption might explain it. Or it might have just been the angle.

I occasionally run across old photos of Nina from when we first got her, and re-realize how much she's grown since I've had her. She must have been very young when she arrived, I'm thinking.

We actually tried CLR first. It got rid of some, but way less than expected. (We don't actually know what the stuff on the glass is, so it's not necessarily surprising that CLR wouldn't take it all off, though it's on the glass in rings like it was deposited during successive evaporations of water, so whatever it is really ought to dissolve in water whether there's CLR present or not.

We may have to go over the glass with a razor blade at some point, in addition to the acetone and/or isopropanol. I don't know. I still haven't had a chance to do much of anything to it yet. I didn't even do the CLR part (that was the husband). I'm sure we'll get there sooner or later, though.

Yes, mostly. I had a fairly bad headache for about half the day on Thursday, too. Not sure what's going on, but whatever it is comes and goes.

I know you already bought some plants, but check out this link for some great terrarium plants... in the sidebar you can sort by category too.

Anyways, when I had an Iguana we actually converted a china cabinet that was broken during the Landers-Big Bear quake into a sizeable condo for Wanda Iguana, adding pegboard along the back and plexiglass for the front. We even potty trained her to use a small aquarium at the bottom of the enclosure!

Yes, Nina does look fat in that pic. Though pregnancy is out of the question now since it was July, females can become gravid with sterile eggs sometimes. I think its an evolutionary adaptation to lessen the chances of predators finding viable eggs.

Anyways, I can't wait to see your terrarium! At the Jax zoo (that i just posted about) they seemed to have a lot of luck with pothos, and boring as pothos is, I'm sure you can appreciate its toughness and availability. That way you don't have to worry about crickets eating something rare!

Oh, and for a cover you can just find metal mesh or screen at the hardware store and staple/nail it around a frame. For the horned lizard enclosure I had as a kid, we even installed a handle for easy cricket feeding!

You're right that CLR won't always do the trick. It's good for removing calcium deposits on the glass. The problem is that the discoloration isn't necessarily *on* the glass, but *in* the glass. Liquids high in calcium (hard water, milk, etc.) will often do this to glass. It's actually an ion-exchange, where the silicon ions in the glass are replaced with calcium ions, and that causes the glass to lose its transparency. It usually doesn't go very deep into the glass, but a deep and labor-intensive polishing is the only real remedy. (Besides my entourage of plants, I also do antique glass, where this is a real issue sometimes.) Sorry to say, but it may be easier to live with the calcium bands, if they aren't too distracting or distressing. Of course, you might have to convince Nina it's just modern architecture.

By the way, how's the advertising going? I commented on that the other day (anonymously, because I wasn't paying attention, I guess). Hope it's generating a little something for the --started to say "kitty", but "doggie" or "lizzie" is more to the point.

Try lemon juice. I use it to clean the markings in my aquariums glass covers. It has to sit on the stain for a few minutes, and then i scrape the stain off with cleaning sponge.

Again, love your blog. Since everyone else is throwing out cleaning advice for your terraquarium, I figured I would as well. My brother and I had quite a few growing up as well as a couple now. Just get a good old-fashioned straight razor and carefully scrape the offending areas (it may take several passes). I would try holding it at around a 25-45 degree angle and push the sharp edge forward. This almost always works for us and goes really quickly.
Grace and peace.
Kaleb

Sadly, that has been tried. It doesn't get anything off in most spots, and where it does, it's only a very thin layer. Either way, the glass looks the same after scraping as it looked before scraping.