I'm not a fan of sensitive plants. I know, I know, I'm a grumpy old man with a shriveled black heart who will never know the true meaning of Christmas. But it's just -- they always look kind of scruffy and weedy and miserable. (They actually are weeds in warmer climates than Iowa's.) And then if you touch one, it'll wilt and then look even more miserable. As novelty plants go, it's kind of a dumb trick, though I concede that even a dumb trick is better than no trick, like most plants.

Anyway. So this isn't one of my personal plants: I took the pictures at Pierson's, in Cedar Rapids, in October. 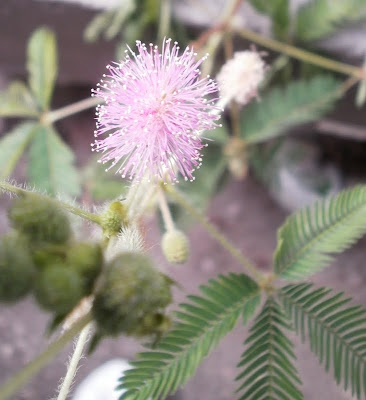 That said, the flowers would be sort of pretty, if there were more of them and/or they were larger. And even as the solitary small things they are, the flowers are interesting, I suppose. Different from the usual flower. 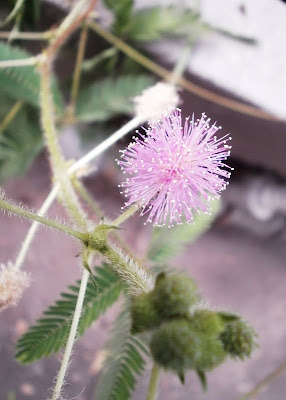 I dunno. I was basically neutral about Mimosa pudica until I worked with them at the garden center. So much time spent trying to separate plants that had grown into one another and tangled; so much angst about germination until we found the secret (hot water + overnight soak + bottom heat). I never hated them the way I hated some plants, but I can't imagine ever wanting to own one, either.

'Course, there are other schools of thought.

I have one of these - it flowered for several weeks, but is not enjoying the winter so far. I am hoping it picks up again in spring, as I've become very attached to it. It looks weedy and miserable right now, but it was so lush and thriving and beautiful.

They go leggy so quickly I couldn't be bothered with them. The only time I have seen them look good was as a whole, tangled bed of flowering mess at Kew Gardens.

I think there are plenty of others in the pea families that go to sleep at night, surely that would fascinate children? They are usually marketed at children or the child-hearted. I pride myself on staying childish but I don't get it.

They grow as trees in Austin and they're awesome. The smell is almost as marvelous as a brugmansia in full bloom. Their nitrogen fixation is a huge plus, too.

This is the one that reminds me of bundleflower. It's good to feed to donkeys (and presumably other animals).

Haha, you're funny! I'll stand by my belief - they are great teachers for kids.

Miss Mimosa is about to flower. Apparently she's happy on my kitchen windowsill.

I actually bought my plant from Kew, Pat. During the summer it really was lush, not leggy at all, I swear!

I used to have one for a long time - it did get leggy, but I placed its little pot on top of the bigger one of one of my Dracaenas, and wrapped the Mimosa stems around the Dracaena, so that didn't bother me.
I eventually had to throw it out because it got a bad case of spider mites. Haven't dared to get one since (it was the first of my plants to get mites, too - and since then I've never managed to get rid of them!)

http://en.wikipedia.org/wiki/Mimosa_nuttallii is a sensitive plant that actually has pretty nice flowers, the few times I've seen it they're larger and held higher so that you actually notice them. It's also native to the midwest!

They sell plants at Kew now? They have a few I'd like...

Ivynettle, I have been using one drop of rosemary oil in a litre of my usual washing-up liquid/olive oil/yucca mixture and the spider mites disappeared. A recent scientific paper said it attacks their little brains as well as stripping the wax off them as many essential oils do. Use too much or without the olive oil and it can damage the plants.

Had a patch of that growing in the yard when I was growing up. The thorns hurt like heck

This is one of our most dreaded weeds here in tropical India. Personally I think that once you've got those thorns hooked deep into your skin, all thoughts of novelty, etc goes flying out of the window along with the longest string of the most colourful cuss words one can dream up. Which is why I was so shocked when my citi-fied daughter came back from a school trip, proudly clutching a mimosa pudica plant that she had actually paid for! She got conned into it with pretty stories about sensitive leaves that bow to you when you touch it ... yeah, right!