Events lined up for me yesterday such that the plants were all watered and the husband had a free day, so we went to Cedar Rapids so he could watch me buy plants. Except he didn't even do that, because he stayed out in the car with Sheba, so really it was more like, he drove me to Cedar Rapids and then watched me bring plant-containing bags out of stores. It's apparently more fun than it sounds like.

Sheba, meanwhile, threw up twice during the trip and then once again after we got her back home, which hasn't happened in a long time, and we're all a little confused about why it would have happened on this particular trip. She'd been doing so well with car rides previously. Sheba never seems particularly disturbed about throwing up, but she's also never really happy about it either, unlike some dogs. Mostly, yesterday, she just seemed kind of tired. (In fairness, the trip was cutting into her nap time quite a bit.)

But so anyway, the point is that I didn't have time last night to get a post together, by the time the plants all got unpacked and photographed and added to the spreadsheets and stuff. Ordinarily, I wouldn't have gone out without having a post ready first, 'cause I'm all responsible like that, but I've been working for a couple weeks now on a post about the trip to the Quad City Botanical Center, and it hasn't been going well. Also it might want to be three posts. I don't know. The upshot is that I've been running around a lot, and this could pay off in the form of all kinds of really cool posts about all kinds of great stuff at any moment, so be ready.

Meanwhile, for today, you get a photo from the Menards parking lot in Iowa City, which isn't plant-related but has to do with a plant-buying trip so it's, like, plant related by association, or something. 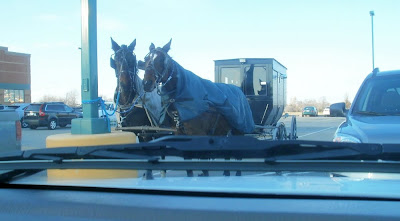 There's a pretty substantial Amish and Mennonite community around here, mostly south of us, in and around Kalona. And sometimes they need to go to Menards.

This is something one sees occasionally in the area, especially near Kalona, though it's fairly unusual to see horse-drawn carriages as far north as Iowa City. Too much traffic, I suspect, to be horse-friendly. I saw plenty of people doing double-takes in the parking lot. One couple even whipped out a camera and got a photo with the horses in the background. (Yes, I was taking pictures too. But it's different: I'm a blogger. I have to.)

If I can get one together, there will be a plant-related post this afternoon, but I also have to start watering again today, and there are a ton of pictures to sort, so that might happen, and it might not. We'll see.

I hope you had a bucket and shovel so you could get some of nature's best fertilizer, delivered by the kindly Amish horses!

I relieved to hear that somebody else also inventories their plants on spreadsheets :)

(Kind) laughs to Ginny. I bet horse plop indoors during the winter would be...something. But it worked wonders on my acorn squash.

RE: Dog barfs - some dogs are just weird like that. As long as she doesn't keep doing it or show any other symptoms (shivering, withdrawn apathy, squirts, immobility), she should be ok. My pits have hyperdelicate stomachs and will even reject some new dog foods. My girl is worse, but she had heartworm when first adopted, so that could play into her sensitivity now.

I hear the odds are now that anyone taking photos in Amish Country being a blogger are 2 to 1.

I'm guessing since you didn't mention it, Sheba didn't notice the horses?

No, she did, and was intensely interested for about five minutes, even whining a bit (which she rarely does), but she got over it pretty quickly once she realized she couldn't get to them.