This has also been called Encyclia cochleata, which is what the file name on the photo says and what the tag on the plant at the show said. Encyclia still outnumbers Prosthechea by two to one on Google, but it's a new plant to me, and I figure as long as I'm learning a new name, I may as well make it the right one.

One of the common names is "clamshell orchid," from the appearance of the petal at the "top." It's actually sort of the bottom of the flower, though: P. cochleata flowers are upside down, developmentally speaking. Usually, an orchid flower's labellum, or lip, is an enlarged petal which serves as a landing platform for insects, like the "slipper" of a Paphiopedilum. In P. cochleata, the labellum hangs over the rest of the flower like a hood instead, but it's still the labellum. Hence, upside-down.

Whether or not the labellum looks like a clamshell is a matter of opinion, I guess: I'm not impressed with the resemblance myself, and would prefer "octopus orchid." But they still don't consult me before giving plants common names, so clamshell (or sometimes "cockle-shell") it is.

Supposedly the flowers smell like lemon/citrus; I don't remember there being a smell when I took the picture, but I wasn't thinking about that at the time, either.

A version of this plant is native to Southern Florida: it has three anthers, instead of the usual one, and is self-fertile. It's also, unfortunately, endangered, which is what happens when you're an orchid trying to coexist with the five and a half million people in the greater Miami metropolitan region. 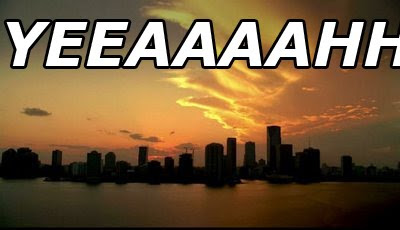 1
The usual one-anthered version is the National Flower of Belize, but is found throughout Central America, Columbia, Venezuela, and the West Indies, and is consequently in much less danger of extinction.

Supposedly they're fairly easy, as orchids go. I don't know whether that's true, but if I see one for sale and have the money, I may very well buy one to try. There's some sound-seeming advice about their care here.

-
1 The opening credits for "CSI: Miami" are set to the song "Won't Get Fooled Again," by The Who. The song starts off with a long, drawn-out, overenthusiastic YEAAAAAAAAAAAAAAAAHHHHHH!!!!! that's fairly over the top all on its own, but comes off as being even more over the top when it follows, as it usually does, a scene involving David Caruso, who is usually trying to be dramatic by putting on his sunglasses and pausing a lot, but they don't give him very interesting lines to end scenes on, so the drama tends to fall flat. Adding a YEAAAAAAAAAAAAAAAAHHHHHH!!!!! after someone says something relatively uninteresting, or something interesting that falls flat, turned into a minor internet meme.
This explanation really wasn't worth the joke, and in fact the joke probably wasn't even funny: I suspect it only seemed funny because I'm in a strange mood at the moment.
Posted by mr_subjunctive at 2:30 AM

It is far more dangerous being a young and pretty human in Southern Florida, from what I have seen of CSI:Miami. Caruso rather undermines his cool with the few lines he gets being like:

"Timmy, I promise you we'll save your mother and your puppy from the heartless, unstoppable dog-eating serial killer we haven't been able to find for the last three episodes. I know that sounds ridiculous even to a 6-year-old raised on Disney but you have my word as a Horatio." Removes sunglasses, forgets next line.

It apparently is called the Octopus Orchid (It even comes up fairly often by that name on Google) so feel free to continue calling it that.

Green Hornet is not too difficult, it seems to want to bloom. But I don't smell lemon/citrus (in mine), more of a musky honey smell, similar to the annual sweet alyssum. Something interesting about orchids is that the flowers develop labellum uppermost, then the majority undergo resupination to put the labellum in the 'welcome mat' position. http://www.oscov.asn.au/articles2/respun.htm

One of my favorites! We used to get them in fairly often at work...but I never wanted to spend the $30 to get one in bloom. Too bad they always sold before they hit the 50 off table :(

Such a wonderfully weird plant - I've admired them at the botanical garden before, but I've never seen them for sale.

They are as tough as iron. I've left mine unwatered for a couple months, and it still just won't die. Getting it to bloom requires more normal care, but go for it if you can find one! I like growing it in Sphagnum like all my orchids.