Seen in Cedar Rapids last Friday, at a little florist's shop. The shop in question, Stejskal Florists, is one we'd happened upon once four years ago, looked at briefly, and then didn't go back to again. This is because it's small, and they didn't have much, and the other places of interest in Cedar Rapids are all on the other side of town -- it just wasn't worth it to go all the way across town to look at Stejskal's. But on Friday we went anyway, and they had Cymbidiums, and Cymbidiums are pretty. 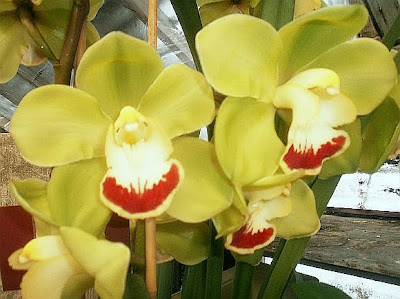 Cymbidiums are also sometimes out of focus. So far they've also always been out of my price range, these two in particular (seriously, folks, florists are like the worst places to try to buy plants, if money is an issue), but someday I'd like to try growing one. I'm especially fond of the pink/red ones, like the one below: 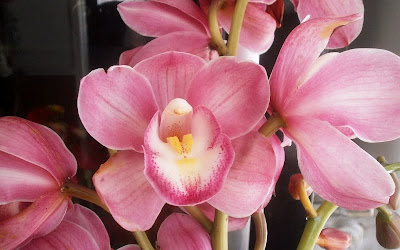 I think we mostly just confused the florist when we came in; they don't, I guess, get a lot of people who are interested in looking at the (attached, slightly rickety) greenhouse, and I kind of assumed that we had permission to do this because someone had given permission four years ago, so there was some confusion at first. And then as we were leaving, she wanted to know whether we were with the nearby community college (which has a horticulture program, which is actually what we'd been checking out four years ago), so then there was another awkward moment, where I wasn't sure if explaining that I have a blog that eats pictures at a phenomenal rate will clarify anything for the person who's asking or just lead to more invasive questions about what, precisely, are these "blogs" of which I speak, and why would I need to take pictures for one, and so on. In this case, I mumbled something about having a blog, and she didn't push for further explanation but I felt embarrassed and weird anyway, so I turned to go, but then I was distracted by the pink Cymbidium and was compelled to stop and take photos of it, making an already-strange moment that much stranger. I did not leave the place feeling particularly suave, I guess is what I'm saying.

But I got a blog post out of it.

Time for a Blog Pride movement? It is not a cause for shame. In fact a brightly (orange on dark blue?) embroidered jacket with:

"I BLOG
That is why I am photographing your plants."

on the back would make you and the shopkeeper both feel better. They will either stay away because you are obviously crazy or lay out the red carpet so you advertise their business for free or give you free Cymbidium plants.

OMG you're giving away blogging secrets! Next thing you'll be telling people you save up photos for future use.

I hate taking pictures sometimes too. I just feel silly and to be totally honest, I used to have my nieces take pictures for me when they were tweens. They took amazing pictures and I would assure them that I was helping them to learn photography. I know. I'm horrible.

The opposite can sometimes be true too. In a few weeks I will be in Seattle at the Flower & Garden Show and I will have to elbow others in order to get pictures. That is really embarrassing too.

Pat, I like that idea! I hardly ever take pictures in shops, because of that awkwardness (and because my friend, then working in a garden centre, once told me about how they threw out someone from a competitor who was photographing their displays, and I'd hate to be mistaken for such a person).

I like Cymbidiums, too, but I'm not sure I've got the space for it... actual space, and in appropriate space (cool enough in winter). Maybe if one ever ends up on the discount rack somewhere...