It's Nina's turn this week, and I was going to get a brand-new picture of her, just . . . I don't know, just because I was -- but when I first put the camera in the terrarium, she hid. And she was really, really good at hiding, too, because the Pellionia has done such a thorough job of climbing over everything that the actual soil in there is pretty much hidden from view. Plus her coloration is sort of camouflage all by itself. So this is the best I could do for a current Nina picture: 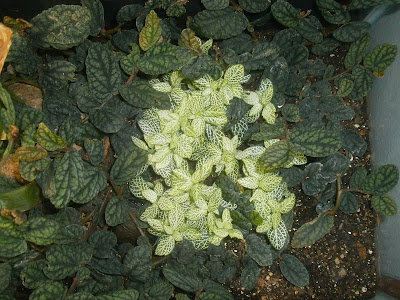 She's under there somewhere.
Since Nina is unable to fulfill her duties this week, Sheba will be filling in. 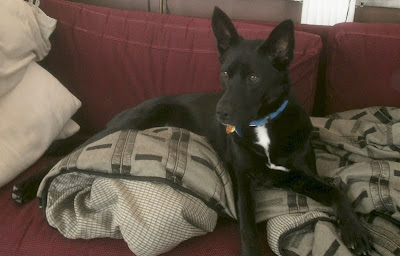 When Sheba first got here, almost a year ago, right away she wanted to jump up on the couch. And right away we told her no. And that was pretty much that, for a while. She wasn't supposed to be on the couch, and she understood that. (She did forget herself occasionally. I'd be in the office and hear her jump up on the couch and then back down again immediately. I don't recall ever having to tell her to get down, it was that fast.)

But I decided that I kind of wanted her on the couch, when we watched TV, because . . . I don't know. We'd be up there, and she'd be on the floor, and -- the floor seemed so very far away. So we had to re-explain the couch policy, which she likewise understood almost immediately. It's turned out well: I like having the three of us together, the husband doesn't have a problem with it, everybody's happy. Sheba seems to have concluded that we've given the couch to her, though, so that's where she sits, most of the day. She'll still allow us to use it at night, though.

My dad's dog knows he's only allowed on the lounge if he's sitting on someone's lap. It's very amusing on cold nights when he pretty much herds people into the lounge room, head butts them in the back of the knee to make them sit before making the leap onto cosy comfort.

And yet he'll never sit on the lounge without a convenient human as a cushion!

Has it really been a year?! Time sure flies!

We were originally going to make the rule that she was only allowed on the couch if we were there too. I think she would have been smart enough to figure out the difference, but I was lazy and didn't want to put the time into training.

I hope your dad's dog is at least small. Sounds kinda pushy.

Not quite a year yet. Maybe six more weeks.

I've never understood the "no pets on the furniture" policy. All of my pets (dogs and cats) were allowed everywhere except the kitchen counters and dining room table.

Tell Nina that she needs to get over her camera shyness so we can admire her. ;)

Very gracious of her.