Well okay. Back in the saddle again, or something like that. Went to Cedar Rapids on Friday, saw some plants, bought some, didn't buy others. And some of this was somewhat interesting. I guess. If you're me. I'll leave the plants I actually bought for another post. (There were three: all three were gesneriads; two were unusual; one of the unusual ones was very cool.)

The theme for the walkaways on this trip: slightly-unusual varieties of perfectly ordinary plants. First up is a variegated Euphorbia milii, from Peck's Garden Center. I'd heard of these, but hadn't seen one myself until Friday. As with most of the walkaways on this trip, I didn't buy it because I had slightly less money than it cost. (In this case, I was also trying to conserve money for later purchases -- Peck's was the first garden center we hit.) 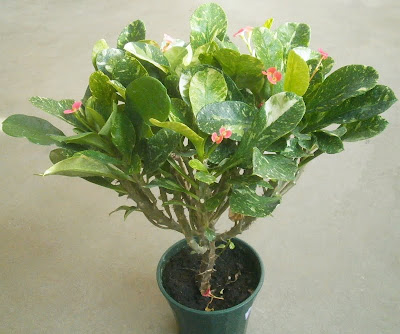 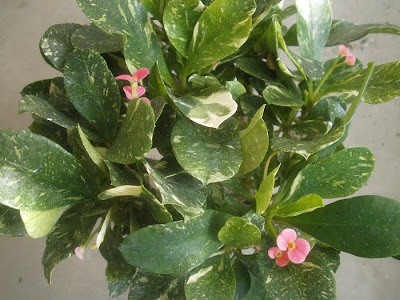 Same plant as above, seen from top.
Peck's also had a NOID Dieffenbachia I've seen before in Cedar Rapids. One day, I'm going to own this, but I had way less money than needed for this plant. 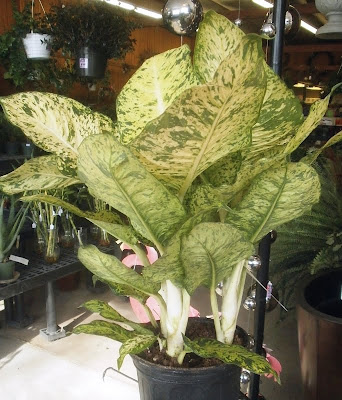 NOID Dieffenbachia cv. (maybe 'Neptune?')
I liked this NOID cactus, too. The photograph makes it look less impressive than I found it at the time. I assume it's probably a Mammillaria. I could have afforded this, but was saving my money for the super-cool stuff I was sure I'd find elsewhere. 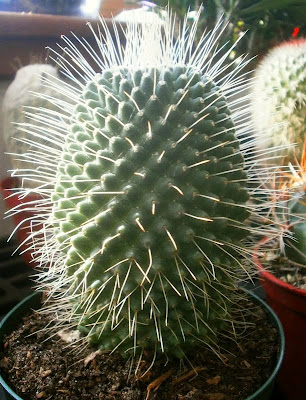 Possibly a Mammillaria of some kind? UPDATE: Believed to be M. spinosissima 'Un Pico.'
Finally, I passed up what I think must be a cultivar of a bird's-nest fern (maybe Asplenium nidus or A. antiquum), because anything that might be an Asplenium is automatically removed from consideration. They hate me, I hate them, we have an agreement and we stick to it. Still, though, I don't think I've ever seen one quite like this before. (I have a nagging suspicion that I may have seen one semi-recently on someone else's blog, though -- has anybody posted about this plant lately?) 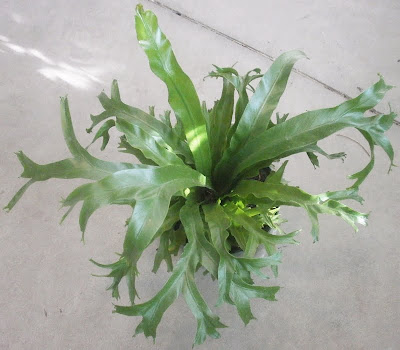 Asplenium something?
We stopped at Lowe's, but they didn't have anything I was interested in (I came close to picking up a partly-dead hanging basket of Hoya lacunosa, because it's one of my favorite plants, it only cost $2.50, and it was only partly dead.), so then we went on to Frontier.

Frontier looked like they were getting ready to receive a new shipment of stuff, because a lot of the tables were cleared off, so they had fewer options than usual. I lingered over a Polyscias I've never seen before -- 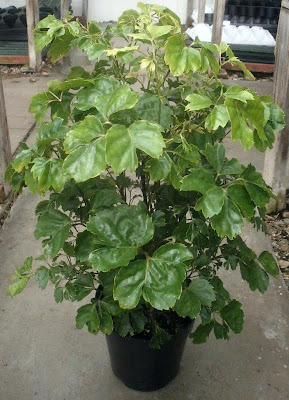 Probably a Polyscias balfouriana variety.
-- which I thought at the time was a new variety of P. fruticosa, but having gotten home and looked at my fruticosa and balfouriana, I think it's actually a mutant balfouriana. Balfouriana leaves are often divided into three leaflets like the above plant and the leaflets are usually rounded. Fruticosa leaves are much more subdivided, and there's nothing rounded about them: they're all angles and points. This makes me feel better about not buying it: balfouriana and I are still not entirely sure we like one another.

Frontier also had a monstrose Cereus peruvianus (or maybe C. hildmannius) that was interesting. I've seen a lot of small monstrose cacti (mostly C. validus or C. repandus?) for sale, and we had them at the ex-job quite a bit, but the bigger ones are rarely available. So I was tempted, but yet again, it was slightly out of budget.

Monstrose Cereus peruvianus.
The main one I went back and forth on (to the point of considering asking the husband if he could buy it for me) was a Zamioculcas zamiifolia. Now, I already have a Zamioculcas. In fact, officially, I have seven. But this is a slightly different variety. I've written about it before (reader consensus was: "yuck."), but had never seen it in person until Friday. 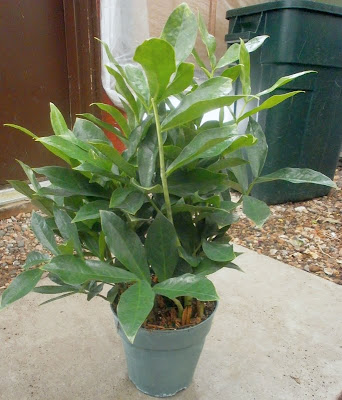 Zamioculcas zamiifolia 'Mini' or 'Zamicro?'
The variety names I've heard for it are 'Mini' or 'Zamicro.' I'm kind of puzzled about why: it's not noticeably smaller than the species, as far as I've seen. Mostly the difference is in the plant shape, but it's a really subtle difference -- the leaflets are a little pointier than the species, and are held more horizontally. You can sort of see the leaflet shape better in the photo from the top of the plant: 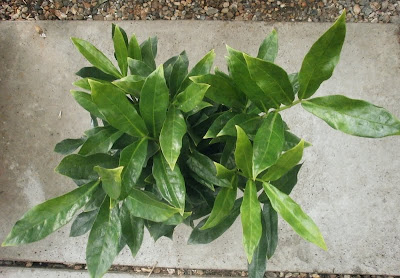 Same plant as above, seen from top.
Otherwise, they appear to be the same thing, which was why I kept going back and forth on it. I already had it, but I didn't, but I kind of did, and yet I sort of didn't. In the end, I decided that the species and I don't get along well enough to justify collecting every variety I ever see. (We're doing better lately, but it's been difficult for me to figure out how to water mine: contrary to what you'd expect, I think I was under-watering for a long time before I figured it out.)

So that's what I didn't get in Cedar Rapids. Which non-purchase was the biggest mistake?

The pictures of plants I did buy will be posted relatively soon.

Oh, wow, love that variegated Euphorbia milii. I'm not sure I can pass up something like that!

Have to agree, the Euphorbia is pretty neat (and I don't even like Euphorbias... never liked them much anyway, and then I had to work with them... ouch.)

I'm surprised my Asplenium is still alive. Ferns and I usually don't get along, but this one's not even lost a single leaf in the two months I've had it. Just a plain old ordinary one, though, no interesting variety.

The first cactus is definitely a Mammillaria of some sort.

You made a good decision when you walked away from the montrose Cereus. Yes, they're seriously cool, but they also get absolutely huge and I don't think you'd be able to plant one outside in your climate.

I'm guessing that Mammilaria species is spinosissima. I have one very similar. Cool plant, and pretty easy care so far.

I'm a fan of exaggerated or dangerous-LOOKING armamentum which is not ACTUALLY so vicious (those long spines aren't bad).

I think the fern might actually be a variety of elkhorn fern, platycerium. Nurseries here in VA sell those and bird's nest ferns all the time. They seem to be fairly popular.

Well, the size wouldn't have deterred me; I already have two C. peruvianus that are seven and a half feet tall. In theory, I could always cut it back and restart, right?

I was all set to say no, M. spinosissima has red spines, but then I remembered the existence of M. s. 'Un Pico.' Which the plant in question may well be. I'm glad I didn't buy it, then: I have a regular spinosissima, which is so far not very impressed with me: it seems to be fine, but it hasn't grown at all. I really need to find a better spot for the cacti and more needy Euphorbias. Either they don't do anything, or they etiolate. Either way, not a satisfying plant-ownership experience.

It's possible. Davesgarden.com lists an elkhorn fern of different texture but similar appearance. The main difference is that the tips of that one split into a bunch more divisions, whereas the tips of this plant more or less come to sharp points and stop. There's another "elkhorn fern," Campyloneurum phyllitidis 'Tesselata,' sold by our friends at Gardino Nursery, which is sort of similar, but again, the tips on that one are all ruffly.

Whatever it was, it was a fern of some kind, and I don't do so well with ferns that I needed to have another, especially if there's any possibility it might have been an Asplenium.

Ah, ok. I do know what you mean about ferns. I love ferns but try to stay away from anything that isn't a bird's nest fern. I slowly, sadly kill them. Can't seem to provide the right conditions.

I did have a beautiful bird's nest fern in my dorm years a go that did really well... 'til I brought it home and my mom killed it.

If you already have 2 C. peruvianus, it's probably wise that you did not buy another. Like San Pedros, they're ridiculously easy to propagate.

The Euphorbia looks very compelling, but I generally avoid that family.

Well, yes, if you don't mind continually chopping off the top and rerooting it, then size wouldn't be a problem.

When I said huge, I was thinking along the lines of this monster (pardon the pun): http://bit.ly/fHguBX. ;)

@Paul: But he doesn't have a montrose Cereus. ;)

I second Anon's call on elkhorn, that's what the one I've seen that looks the same was called.