Sheba is surprisingly indifferent to the snow. I'd expected that she would either love it and want to dig through it, roll around in it, etc., or that she'd want to avoid it as much as she could and go inside immediately. She really doesn't seem to care one way or the other: what she cares about is whether she gets to chase tennis balls. Which she isn't even consistently good at: 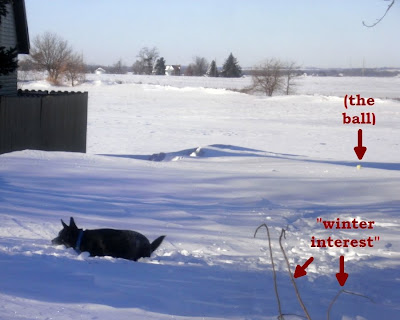 The "winter interest" wasn't there before the blizzard; I'm assuming it's branches of the maple that got snapped off by the storm and happened to land more or less upright. It does look a lot like "winter interest" often looks in photos, though, so that's what we're calling it until the thaw.
With the appearance of an extra foot of snow (the closest I've seen to an official total was 14 inches / 36 cm, by the way) to get through to reach the balls, she's adopted a sort of half-swimming style of getting through the drifts: she leaps ahead, then kicks with her hind legs until they're caught up to the rest of her, then leaps again. I occasionally have pangs that maybe it's cruel to make her do this -- I mean, it's cold, and it sometimes looks like a strenuous effort -- but her tail wags hard the whole time, and she has yet to decide it's time to go in before I do, so as far as I can tell she likes swimming through the snow as well as she liked running across the grass six months ago. Anything to chase the precious, precious tennis balls. Over and over. Not sure how I feel about this. I may be jealous.

Too funny! :) I love the pic of Sheba going in entirely the wrong direction.

A friend of mine has St. Bernards, and one of them contentedly reclined in front of the house during our last heavy snowfall (about 19 inches), refusing to come inside the house for a couple hours. My friend snapped a photo, showing the dog simply laying there, becoming part of the winter landscape. "Sure you don't want to come in?" he kept asking. Nope, the dog just kept laying there. I wish I had the photo - it's funny and endearing at the same time, and a reminder that we'll never fully understand another sentient being. Guess you can take the St. Bernard out of Switzerland, but you can't take the Switzerland out of the St. Bernard. (Yes, he finally came in, gave a good shake and seemed very cheerful.)

by the way, regarding Sheba: she might be sniffing interesting things - snow seems to capture all sorts of interesting scents.