I've been a little worried about the Justicia I got from a reader last August. It dries out faster than the 12-to-14-day watering schedule permits, so I only catch it when it's wilted from lack of water, and although it always perks back up again, it usually loses a couple leaves in the process. (Zach, at The Variegated Thumb, has experienced this also.) And I figured I probably didn't have enough light to get it to rebloom inside: it's in an east window, with a number of other plants between the window and itself. (I have lots of plants. They sometimes wind up in non-ideal locations.) But it looks like it's going to rebloom anyway, which is interesting. 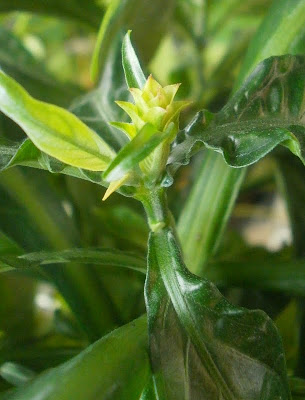 Justicia and I are still pretty much strangers to one another,1 but this is an encouraging development. I think it may also have thrown a seed into a neighboring plant, as they are rumored to do; the seedling didn't wind up surviving, but there was something I couldn't identify coming up in one of the Dieffenbachias a few months ago. I don't know exactly what happened to it, but it looked like it could have been a Justicia. They're also supposed to propagate fairly easily from cuttings.2 So all the early signs are looking good, except for that whole watering issue. And I'm fairly sure repotting would fix that.


1 Indeed, it may be something of a stranger to itself: Justicia scheidweileri is, as far as I can determine, the correct name for the plant, but they're still sold as Porphyrocoma pohliana, and some websites only acknowledge the Porphyrocoma name.
2 Not surprising for a plant in the same family as Hypoestes phyllostachya or Hemigraphis exotica, though the Acanthaceae is also home to Strobilanthes dyerianus, which I've found harder to start from cuttings, and often not worth it even when the effort succeeds.
Posted by mr_subjunctive at 2:30 AM