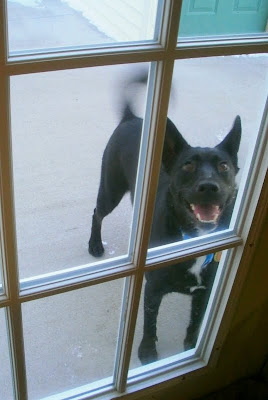 It's so much easier to find interesting photos for Sheba weeks than for Nina weeks. She has so many more places she can go, after all.

No news about either pet, really, though a couple weeks ago, the in-laws were here briefly with their dog. Sheba and the dog-in-law (female, mutt, mostly pit bull with something else that I forget) mostly got along, though there was a lot of playing (?) that sort of turned into something else, or seemed like it might turn into something else. Had the dog-in-law been a new permanent resident, I'm sure they would have worked something out eventually, but I wasn't always sure what was getting communicated between them or how they felt about one another.

We've talked a few times about getting a second dog, though for the moment we're agreed that this wouldn't be a good time. I check the Iowa City Shelter's website regularly anyway, and in one case we even went to the shelter so I could meet one of the dogs, even knowing that adopting a second dog wasn't going to happen. (The dog in question, a pit bull named Nico, has since been adopted.) Why? Don't know. Presently I'm semi-interested in a bulldog-mastiff mix named Devo, who's gone unadopted for quite a while now.

(Devo, of course, should be a whippet. Nobody consults me.)

Sheba made me smile and your last line made me laugh, both of which I really needed just now. Thanks. :)

Sheba looks so cheerful in that photo! Very cute.