The reader would be forgiven for not understanding why this is a big deal, but one of the troubles with Ficus elastica indoors is that they're reluctant to branch, so after you've had one a while, it often looks like a single tall thin stick with a tuft of leaves at the top. Even pruning -- which ordinarily causes plants to branch -- won't necessarily do it: it's common for an indoor-grown Ficus elastica to respond to the removal of a growing tip with . . . the production of a single new growing tip.

So I was pretty pleased to discover a spontaneous branch on my plant: 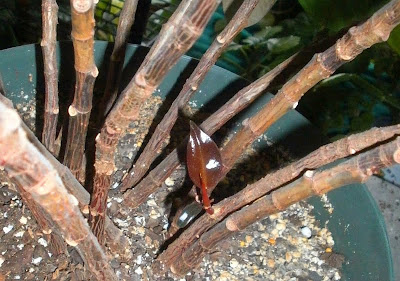 Granted, this is not going to do much to fill in the base -- as you can see, the plant's lost all the leaves down there -- but I figure it can't hurt, and I didn't have to do anything, so I'm happy.

In general, to get a Ficus elastica (or F. lyrata) to branch, the best way to do it is to let it spend a few months outside. It may also help to cut the stem back and/or move it up to a slightly larger pot first, though that's not strictly necessary. There are four things to keep in mind about letting your plant go outside for a season, though:

This plant didn't go outside, but it has been sitting under a couple shop lights for a couple years, so it gets fairly consistent, if not intense, light. Or possibly I'm just lucky. Either way, I'm happy it's decided to fill in a little.

Did you mean to post your Saturday picture on Thursday?

No. Shit. I would have sworn I checked the date before I hit "Publish."

Hehe, it didn't hit me until just a moment before I saw that comment - I already saw a Saturday picture, but it hasn't been Saturday yet, right? Right? (Not working makes it a bit difficult to keep track of the days.)

Anyway, I'm not sorry mine's not branching. Tall, narrow plants take up so much less space. And if it gets bare at the bottom, well, time to air layer again. (And see whether the bottom bit resprouts, and if it does, curse because now I have two plants, and I already didn't have the space for one of them!)

Congrats! Mine is under bright fluorescents and I've trimmed it back twice to no avail. Even had it outside in full sun for the summer. They just don't want to branch. Grrrrrrhhh...

I've found that occasionally they branch from or near a bend. I don't know if stressed tissue causes a new branch or two to pop out, or if it's just the plant's way of achieving gravitational equilibrium. In any event, I agree it's nice to see a new branch on these plants :)