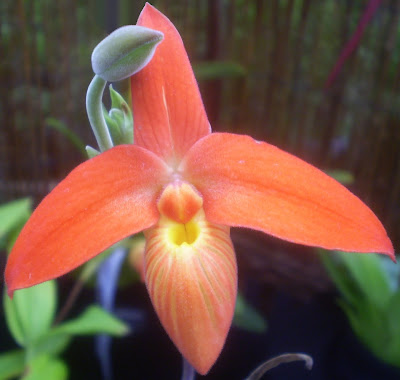 A notable historical fact about Phragmipediums (abbreviated "Phrag" by those in the trade, or people who would just prefer not to type out Phragmipedium, which is most everybody) is that one species, P. besseae, has only been known since 1981, when it was found in Peru by Elizabeth Locke Besse. It's unusual among Phrags for its flower color, which is a strong orange to salmon, and there are a few yellow or cream-colored specimens out there too. Naturally, once word got out about the existence of the new species, orchid collectors immediately descended on the site and took everything they could get their hands on. The trade of wild-collected plants is now banned, but it all happened fast enough that some populations were wiped out completely, either by overcollection or by habitat destruction.

This is all pretty obviously not a good thing for the local ecosystem (P. besseae is found along the eastern slope of the Andes in Peru, Columbia and Ecuador, so it's probably technically several ecosystems, not just one), but it's more ambiguous for P. besseae specifically. One could argue that it was doomed by development sooner or later, and the collectors saved the species from extinction. I mean, I probably wouldn't argue that, but now that P. besseae is part of the orchid trade and being used in hybridization, it's indisputably a hell of a lot less likely to go extinct than it was when nobody knew about it.

Of course the best option would have been for collectors to get specimens for breeding without taking so many that they wiped out the species in the wild, but that would have depended on everybody being restrained, rational, and co-operative. Which is unlikely.

In site-related news, I have a couple other orchid pictures from elsewhere that may or may not show up in the next month and a half, but this is the last of the Wallace's Orchid Show photos from 2010. I remind readers that the 2011 show is March 12 and 13 at the Wallace's Garden Center in Bettendorf, IA, and I'll be there on the 12th (or at least that's the plan at the moment), should anybody want to try to meet up there. E-mail if you're interested.

They're so pretty...if only mine would ever bloom. Grr.

Bessiae flowers have spectacular color but are quite small for the size of the plant. Kovachii flowers have greatr color and are big. 5-7 inches from end-to-end measured along the petals are not unusual.