Other: The Green Cordyline fruticosa

I've recently become disillusioned with Cordyline fruticosa. I have five, at the moment, one of which has been with me for four and a half years now. But -- and it's a big but -- it's no longer the case that Cordyline is an "easy difficult" plant for me, as I said in the profile: I realized this around October or November this year, when I went to check them for watering and found spider mites on one. Again. Just like every other year I've had them. Previously, I've tried spraying the mites off with water, hand-washing the leaves with soap and water, spraying with neem,1 and anything else that's occurred to me, but it never gets rid of the mites: they're always back in a couple weeks. It's time-consuming and frustrating, but I felt obligated to do something, so I kept doing it.

And I would still have been okay letting the Cordylines stay where they were, mingling freely with the other plants, if not for the fact that they'd all started to get burnt tips and margins. The 'Kiwi' went first, in December 2009, and the others followed about six months later. My suspicion is that this was a delayed reaction to the change in water since we moved: in Iowa City, we had soft, slightly acid river water, and now we have hard (sometimes extremely hard), alkaline aquifer water. This is my theory mostly because I've ruled out pretty much all the other possibilities: the change in water is the only major thing that's happened to them.

So what I ultimately wound up doing with them last fall was: I watered the four small ones, sprayed them thoroughly with neem, put them in plastic bags, and stuck them in the basement. If they survive the winter, great: I'll cut them back, let them resprout, and send them outside for the summer. If they die, well, I was basically ready to throw them away already, so. 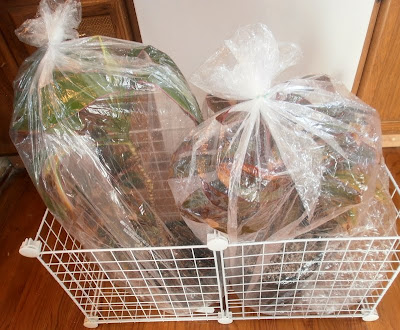 The bagged Cordylines.
None of which is even the point of the post yet.2

The point of the post is that the one exception was the large solid-green plant, which I've had for about three and a half years. It didn't start getting tip and margin burn when all the others did, so I have decided not to bag it for the winter. It probably has mites, but I'm willing to live with that if it'll just hold on to its leaves and not share them with too many other plants. 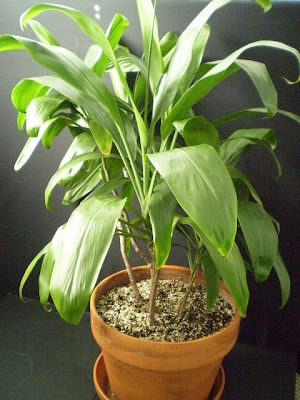 Old photo of the green Cordyline fruticosa.
So what's different about how the green one was treated, compared to the others?

The green one spent the summer outside last year. I think the explanation for the lack of leaf burn is that it got rainwater all summer long and hasn't been watered very often since I brought it in, so maybe doesn't have minerals built up in the pot to the same degree as the other Cordylines. 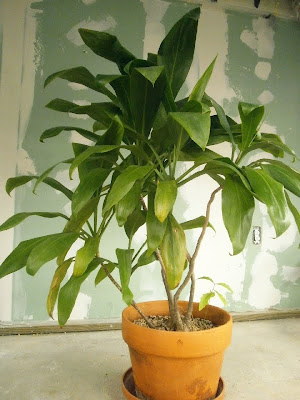 Current photo of the green Cordyline fruticosa.
However, I am reminded that being outside for a summer is not entirely without its own set of problems: 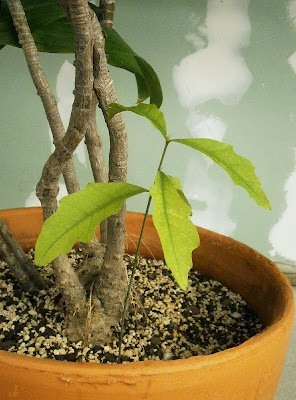 That's a baby oak tree growing in the pot there. I suppose I should have known this was a possibility, since I've pulled dozens of maple seedlings out of every container I've had outside since we moved, but somehow it never occurred to me that oaks might be weedy too. I suppose technically one has to blame the squirrels.

In any case. The oak obviously can't stay there in the pot, and we're not in need of another oak tree, but I sort of feel like, you know, it's trying so hard. So I'm wondering: when and how would one go about transplanting it to the yard?

-
1 Not recommended -- they always dropped a bunch of leaves every time after I neemed them.
2 Though I've wanted to write a post about the giving up and bagging for quite a while, and am pleased that I've gotten to use that picture finally.
Posted by mr_subjunctive at 2:30 AM

I was using water from my well on houseplants and noticed that they were going steadily, if slowly, downhill. Lots of tip burn on leaves. It got so bad I began to carry in water for the plants. The final solution was that I had another well drilled - problem solved and it tastes better as well. Iron may be good for you but not for the plants, the pots, the kettles; glad I changed before I felt like the Tin Man.

I've always heard that spider mites don't like humid conditions. I wonder if you've invented a practical method of control----eliminate what you see and bag the plant to raise humidity and control the remaining ones.

I'm not sure if it's that they don't like humidity, or that they really do like dry air, but yes, that much is true. They also prefer still air to moving air, though, so the added humidity of bagging may not make up for the decreased air movement. Mostly I was just trying to: keep from having to water them, seal in the neem, and keep the mites from spreading to other plants.

Have you considered collecting rainwater for your more sensitive plants? I have three -- two of which I built myself in an Arlington County workshop (loads of fun). I use the water from the rain barrels for my indoor plants.

I've thought about it, but rejected it because it seemed like a lot of extra effort. I'm reconsidering the idea, though that still wouldn't help me much in the winter, unless I somehow managed to stockpile enough rain to last the season or got a lot more snow than we've gotten here.

(I've also considered the idea of going out to collect snow, to melt and use, but, one, snow volume is so much bigger than water volume that it'd be a lot of work, and two, most of the available snow in the back yard is contaminated with Sheba poop, which would be no good for the plants.)

Judging by the chloris of your oak seedling I'm gonna be the pH of your water is changing the nutrient availability (making something TOO available) and it's burning your poor plants. I have no idea what cordyline would be hypersensitive to though so I can't really help you there.

Tom, I'd say it's the opposite. We were taught at school that a too-high soil pH makes iron less available, and those oak leaves look like a textbook picture for iron deficiency - chlorotic with green veins.
Mr_S, if I had the chance to collect rainwater, I'd do it in an instant. Even if it doesn't last the whole year, at least it'll slow the mineral buildup/rising pH down a little. (Since I can't have a rain barrel, I'm honestly beginning to consider taking home a few bottles of rainwater from the cistern at work every week, to use for the orchids and such!)

As for the oak, definitely wait for spring to plant it. I'd take it out and put it in its own pot for now - the longer you leave it in there, the harder it will be to take out later (I sometimes tried transplanting seedlings as a kid, and the roots can be a bitch), harden it off before you plant it outside, if it's used to indoors temperatures now.

Would a simple charcoal water filter (like a Brita) help?

Have you considered squirrels as the seed planting culprits? They garden for me on the daily. Sometimes they mistake root balls for food, though =(

Ivynettle - I guess I got my self jumbled. I know about the whole pH iron relationship thing... I guess I just didn't make it clear that I meant that maybe because the pH is so out of whack another nutrient or salt could be accumulating and causing the burn.

Reverse osmosis filters will do the job but you would need one of the big ones designed to be plumbed in to a tap (faucet?).